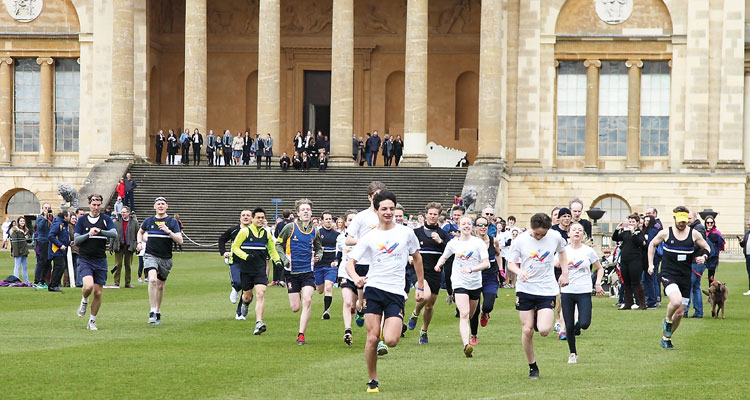 Possibly the largest turnout of Old Stoics for many a long year gathered for the annual race against the school on 10 March, 14 of us in all. We scored 6-a-side, with a win for the school’s younger, fitter, legs by 42 points to 36. Despite this defeat there are two definite positives.

Quotes from two runners will impart a flavour of this most enjoyable event:

Richard Lloyd (Grenville 94) writes that earlier in the year he started a weekly session of trail running which not only set him up for the OS race but enabled him, with his club members, to win the team event at a recent Chiltern Harriers race “…all thanks to getting back into shape to do the cross-country at Stowe”. It’s 25 years since he last ran at Stowe. Not bad, I say.

Toby Gauvain (Temple 89) relates his ambition to beat his two Stoic sons, Henry (Temple LVI) and George (Temple 4th form), but sadly a nasty cold got the better of him, in which case his 30.31 was a sterling effort. Both boys, and dad, live to race another day come March 19 2017, at 12 noon.

Toby is another who has found inspiration from the OS race to start running for a bit of fitness. We have always said that the race is as much a social experience as a flat-out thrash, and is ideal for those training for other sports. Combining it with the Spring OS Sports Day, as I believe is the intention going forward, offers an opportunity to meet friends who do other sports and compare tales of derring-do in the sporting arena. This year’s OS Sports Day will take place on Sunday 19 March 2017.

I always also plug the race we enter in December, although it is rather far ahead for The Corinthian readers. This is organised by Thames Hare & Hounds, called the Alumni Race, and open to invited schools’ old boys’ teams. Although hotly contested at the sharp end, we still enjoy the 5 miles on Wimbledon Common as an excuse to get out of Christmas shopping.