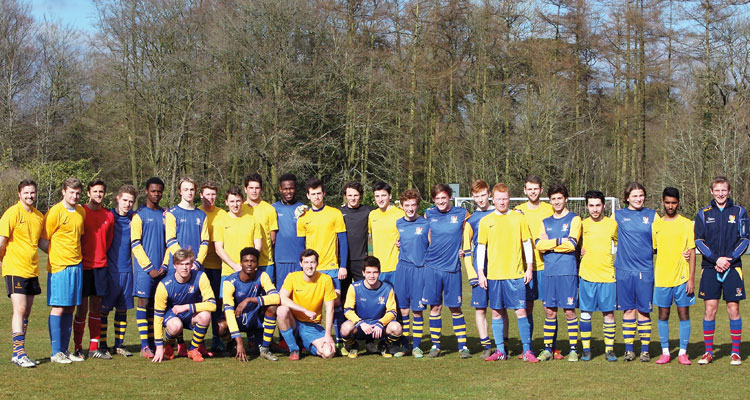 The Old Stoics find themselves midway through their fourth season in the Arthurian League hoping to push on for promotion from Division Four.

After narrowly missing out on moving up a division in their debut campaign, the two subsequent seasons saw the Old Stoics looking nervously over their shoulders fearing relegation.

However, this season an influx of fresh youngsters such as Ugonna Anyamele (Temple 16), Natse Jemide (Bruce 16) and Nyan Patel (Grenville 16) allied to a regular core of more experienced campaigners, the team find themselves (at the time of writing) five points off top spot with two games in hand over league leaders Old Haberdashers.

Star performers have been Harry Wolrige Gordon (Chatham 08), whose tenacity in the challenge make him one of the most feared left-backs around, whilst up front Tolly Leech (Temple 10) continues to score goals by the bucket load, often featuring displays of rare skill. Hamish Eggins (Temple 09) has shown a dramatic improvement both in discipline and fitness to become first choice right back while Jamie Hirst (Walpole 08) and Alexander Jollivet (Grenville 08) combine both grit and guile to be key performers in an often congested midfield. In goal, Mark Thompson-Royds (Chatham 07) continues to be the best shot-stopper in the league.

To monitor the team’s progress in both cup competitions and the league see: www.full-time.thefa.com. Search for Old Stoic football.