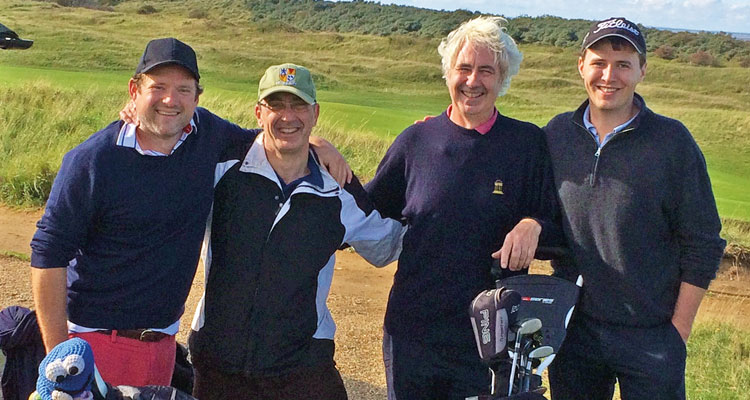 2016 was a busy year under the excellent Captaincy of Christopher Luddington (Chatham 82) with a very full fixture list of team events, matches and meetings.

Halford Hewitt: A heavy loss to Whitgift in the first round was the catalyst for change in the first team Captained by Haydn Brooks (Cobham 04). Grafton Morrish: In May a changed team qualified for the Grafton Morrish Finals after a three year absence and then progressed to the semi-finals with wins over Culford, Harrow, Eton and Clifton before going down to the eventual winners, Birkenhead. Peter Hale (Chandos 90) proved a solid partner for Haydn Brooks and Charlie Rotheroe (Walpole 85), David Johnstone (Chatham 89), Charles Gartside (Chandos 91) and Sean Morris (Walpole 87) played their part in the Society’s best performance since 1994. Dick Watson Trophy: On the same weekend as the Grafton Morrish a further team of Jeremy Scowsill (Temple 76), Ian Bendell (Walpole 87), William Hill (Grenville 75) and Nigel Wright (Chatham 78) came a very creditable 5th out of 15 teams in the Dick Watson Trophy at Aldeburgh beating last year’s winners, Uppingham, in the Sunday play off round. Cyril Gray (Over 50s): Stand-in Captain, David Julius (Chatham 72), and his partner, Martyn Palmer (Bruce 74), led from the front in wins over Blundells and Merchant Taylors before the team lost narrowly 2-1 to Rossall. The other pairs in the team were Greg Choyce (Cobham 73) and Tony Edgerley (Chandos 82) and John Rowe (Chandos 71) and Ben Dixey (Grenville 71).

Matches: In addition to playing the School team at Woking, Stowe and Stoke Park there were matches against The Leys at Rye, Old Haileyburians and Old Canfordians at Sunningdale, The Templars at Deal, Old Gregorians at New Zealand and Aldeburgh Golf Club. The Society won four, lost three and halved two of the matches with the highlight a half against Haileybury after six consecutive losses.

Meetings: The Society Meetings were held at Formby (Northern Meeting), Woking (Spring Meeting with 21 attendees), Aldeburgh (Summer) and Hunstanton (Autumn). The performance highlights were Charlie Gartside’s 71 in the singles at Woking and Matt Bazeley’s (Lyttelton 92) 73 to win the Hunstanton scratch competition. Chris and Nicholas Luddington (Chatham 78) also had a memorable win against Hamish Edwards (Chandos 10) and Matt Bazeley in the final of the Lucas Langley Salvers – their first at Hunstanton for 28 years.

Discounts for younger golfers: 65 different Old Stoics played in the fixtures in 2016 and encouragingly the number of under 30 year olds involved showed a further increase. We are keen for more young players of all standards to be involved in the Society and discounts are available to those under 30 for all matches and meetings.

The year ahead: 2017 promises to be an exciting year with several new fixtures and more Old Stoics on our database. The appointment of Andrew Hancox as The School Golf Professional and Head of Golf is very welcome and the Society is working closely with Andrew to develop even closer links between the Society and the School teams. At the 2016 AGM, Nick Luddington took over as Captain of the Society from his brother, Chris, who led the Society in a very positive manner. First Team Captain Haydn Brooks haydnbrooks@googlemail.com would certainly like to hear from low single figure handicap players who want to be considered for the Halford Hewitt and Grafton Morrish. However, players of all standards and eras, male and female, are welcome at our matches and meetings taking place at some of the best courses in the country. If anyone wants to know more about the Society check our section on the Stowe website or contact Peter Simmons pjgsimmons@gmail.com or 07957 141826