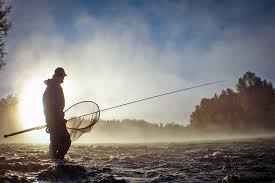 After discussing the idea for a couple of years, the Old Stoic Fly Fishing Club was hatched in November last year when a group of avid Old Stoic fly fishermen met at the Royal Automobile Club in London and set up the Club.

The aim of the Club is to develop friendships amongst Old Stoics through the pursuit of fly fishing and this was very much in evidence at our first meeting when those who attended: Ian Bendell (Walpole 87), Edward Hoy (Cobham 06), Edward Jackson (Bruce 05), Rupert Lynch (Temple 05), Samson Stieger-White (Cobham 08) and Andy Comber (Grenville 01), very quickly realised that there are other Old Stoics who share their passion for fly fishing, who want to fish with like-minded people and who want to have a bit of fun and camaraderie along the way!

A further meeting of the Club was held in January at The Flyfishers’ Club in London when the following were also welcomed into the Club: Jason Raikes (Walpole 85), Benjie Nesbitt (Bruce 05), Harry Egerton (Grafton 03), Jamie Emslie (Temple 05), Gus Marshall-Andrew (Bruce 90), Jonathan Bush (Bruce 91) and Graham Riddick (Walpole 73). The fun and camaraderie evident at the first meeting was further added to by the new joiners!

We have started to develop our calendar for 2017 which includes; our pre-season social at The Flyfishers’ Club on Thursday 20 April, a trip to Grafham Waters on the weekend of 10-11 June, a day’s dry fly on the Kennet and our annual ‘wild card’ event. The ‘wild card’ event is a trip chosen by members which provides them with an opportunity to undertake a form of fly fishing which otherwise they would not normally do. This year, amongst other things, we are considering fly fishing for tuna off the coast of southern France or fly fishing for porbeagle sharks off the coast of southern England – the guide we are thinking of using for the shark fishing last year caught a porbeagle of over 350lbs on a fly rod, so this is ranking very highly in our thinking!

The Club is open to all Old Stoics and we are keen to hear from potential new members and/or Old Stoics of a generous nature who might have some waters they think we might like to fish! If you would like to find out more about the Club then please contact me at ianbendell@hotmail.com.