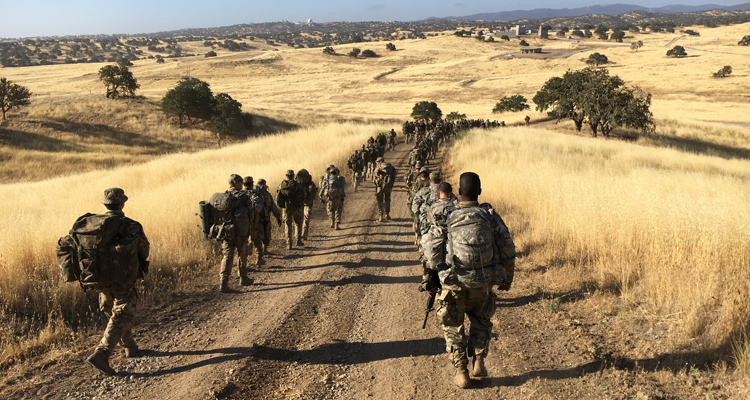 Troops on an excercise

In June 2017, three Old Stoics took part in a joint military exercise with the British and US forces in Camp Roberts, California.

The Honourable Artillery Company is the oldest Regiment in the British Army and was formed in 1537, when Henry VIII granted a charter to the Fraternity or Guild of Artillery of Longbows, Crossbows and Handguns for “the better increase of the defence of this our realm” and “the maintenance of the science of artillery”. Today, the HAC focuses on the core Surveillance and Target Acquisition (STA) skillsets working with 5th Regiment Royal Artillery as Regular army counterparts. The role involves rural and urban observation of targets to gather information and feedback to build the overall intelligence picture to inform future offensive operations.

During the two week exercise, they took part in firing range sessions with familiarisation on American weapons and equipment; a six day exercise in the 35°C heat of the desert as well as “earning their spurs” in an arduous 24 hour Spur Ride alongside US counterparts which proved mettle, teamwork and capability in a Cavalry tradition.

The six day exercise started with two hours sleep before being inserted at 0200 by Chinook to the exercise area where 3 Squadron HAC (involving Troopers White and Pilleau) met up with their American counterparts Blackfoot, Bravo Company who then travelled via a humvee convoy to a pre-arranged drop off. Each British detachment, consisting of six men, then moved by foot to their objectives to establish their Observation Posts (OPs) to observe enemy positions within their area of operations. Once each OP was established, the troops then went into a routine which loosely involved three hours on duty and three hours off. As the exercise progressed, each detachment encountered certain challenges, some more testing than others, for example, one detachment managed to walk over a family of rattlesnakes. The culmination of the exercise was the joint British and American assault of Objective Cobra. 3 Squadron were part of a number of cut off ambushes to stop enemy forces fleeing the assault and any enemy forces trying to reinforce Objective Cobra. A particular highlight of Trooper Pilleau was being winched into a Blackhawk helicopter as part of a medical evacuation serial following an enemy assault on his detachment’s OP.

Following the exercise, the HAC were given a few hours downtime before the Spur Ride commenced with an American fitness test. Soldiers who met the requirements were selected to take part in the Order of the Spur, a time honoured cavalry tradition across America. Spur candidates are known as a ‘shave tail’ because when a new trooper entered the cavalry and were mounted on a horse for the first time the horse’s shaved tail indicated to others that the rider was inexperienced.

The Spur Ride is carried out over a challenging 24 hour period and consists of numerous tasks including house clearance, weapons handling, casualty first aid, reaction to indirect and direct fire, target identification and radio comms. Candidates are ‘smoked’ throughout the exercise to test their steel and motivation.

The final act was an eight mile ruck march starting at 4am with candidates being led back into Camp Roberts by a mounted horse procession. A closing ceremony and presentation of the spurs followed, with the HAC Regimental Band providing a truly British touch to proceedings.

Trooper White said, “The best part of the exercise for me was to work alongside our allies in the field and learn how our differing skills can integrate and work side by side in our role of observation”. The purpose of the exercise was to allow soldiers and officers from the two nations to work together in a realistic scenario to test the strength of the two nations’ ability to work together in their roles of surveillance and target acquisition. As George Bernard Shaw said, “The British and Americans are one nation separated by the same language” and this was certainly found to be the case in some aspects. The HAC has hosted Stowe 1st XI rugby matches in recent years.

On 1 December 2017, Dr Wallersteiner was warmly welcomed to the HAC to speak at the 198th Annual Mess Club Dinner. The President, Major Charles Marment (retd) (Former Parent) kindly invited all Old Stoic active unit members, including guests, Alan Hughes (Grenville Housemaster) and Mike Rickner (Queen’s Houseparent). The Mess Club Dinner has a reputation for being one of the best events on the social calendar and is usually reserved for more senior ranks and officers so it was a particular honour to be invited. The evening was a very enjoyable and provided a good opportunity to reminisce about our school days. Many thanks to Major Marment for his generosity.