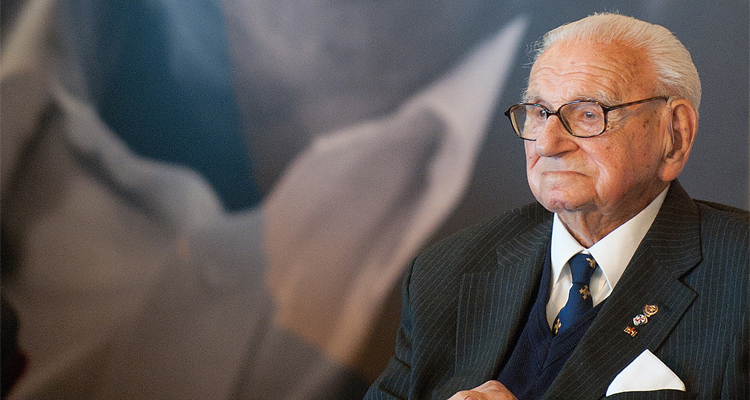 Who would save the children?

The pages of this magazine contain a collection of stories recounting heroic deeds by Old Stoics. Arguably, Sir Nicholas Winton’s (Grenville 27) historic achievement of rescuing 669 Czechoslovak Jewish children from near certain death at the hands of the Nazis, remains one of the most compassionate acts completed by an Old Stoic in the history of our School.

Sir Nicholas, who died in 2016, was hailed in the press as the ‘British Schindler’. He disliked this comparison and insisted that he had risked less personally and that his work happened before the War.

Such was his selfless nature that he considered his actions as insignificant: his heroic exploits only came to light in 1988 when his wife, Grete, came across a long-forgotten scrapbook in the attic documenting Winton’s actions, and the list of all the 669 children he had helped to safety. For half a century, the 669 children, now dispersed all over the world, were unaware of who had saved them.

However, Sir Nicholas insisted that he simply did as any other person would in his place. In late December 1938, he was preparing to go skiing in Switzerland with his friend Martin Blake. At the last minute, Blake phoned to cancel and urged Winton to join him in Prague instead. There was something important Blake wanted to show him. Sir Nicholas suspected that the change of plans was connected with Hitler. Having read Mein Kampf he had a clear idea of the threat Hitler and Nazism now posed to Czech Jews.

The incorporation of Austria into the Third Reich in the Anschluss of March 1938, followed by the annexation of the Sudetenland of Czechoslovakia to Germany under the Munich Agreement the following October, resulted in thousands of refugees fleeing from the Czech-German border region into Prague and her surrounds. They were crammed into makeshift camps, where the conditions were appalling.

This was what Blake wanted Sir Nicholas to see. As an emissary for the British Committee for Refugees from Czechoslovakia which had set up an office in Prague, Blake had received a plea for help. Volunteers were organising the escape of adults who were in the greatest danger. However, there was one major problem: who would save the children?

When faced with such misery, Sir Nicholas agreed to take on the life-saving task. From a makeshift office, and in just three weeks, he interviewed hundreds of distraught parents who were willing to let their children go alone to Britain. Armed with details and photos of more than 500 cases, he flew back to London.

The Home Office, though co-operative, imposed more stringent conditions of entry on the Winton children than on those coming directly from Germany and Austria. “We went to them urgently asking for permits, only to be told languidly, Why rush, old boy nothing will happen in Europe,” Sir Nicholas later said. Foster parents, guarantors and £50 to cover repatriation costs (a huge sum at that time) had to be found for each child. Sir Nicholas also had to raise money to help pay for the special trains.

Sir Nicholas turned to Jewish and Christian organisations, placed appeals in the press, on radio, in synagogues and churches. Helped by his mother and two volunteers, he joined them each day once the Stock Exchange closed at 3.30pm, and worked well into the night. By the beginning of March, Winton had secured homes for the first 20 youngsters. However, now there were almost 5,000 children on his list.

Sir Nicholas’ efforts resulted in eight trains leaving Prague between 14 March and 2 August 1939, bringing 669, mainly but not exclusively Jewish, children to safety. The largest Kindertransport, with 250 children already seated on the train, was due to leave on 3 September – the day Britain declared war on Germany. The train remained in the station and, as far as is known, most of these children ultimately perished in the camps. “I think about it a lot,” he later said, “how many more we could have got out.” Of 15,000 Jewish children that remained stranded in Prague after war was declared, only about 100 survived.

In 2008, Sir Nicholas was nominated for the Nobel Peace Prize by the Czech government. A statue depicting him holding a child and standing by another was unveiled at Prague’s railway station a year later. He was knighted in 2003 in recognition of his work on the Czech Kindertransport. On 1 September 2009, a train departed from Prague and arrived at Liverpool Street, met by the 100 year old Winton.

In 2013, two Stoics interviewed Sir Nicholas about his heroic efforts. They asked him for advice to pass on to future generations of Stoics. He said, “I think the most important thing in life today is ethics, love, honesty, decency and kindness and that’s what matters, ethics and compromise are the things to go for.” It was Sir Nicholas’ belief that, “there are only two words to save the world today, one is ethics and the other is compromise.”