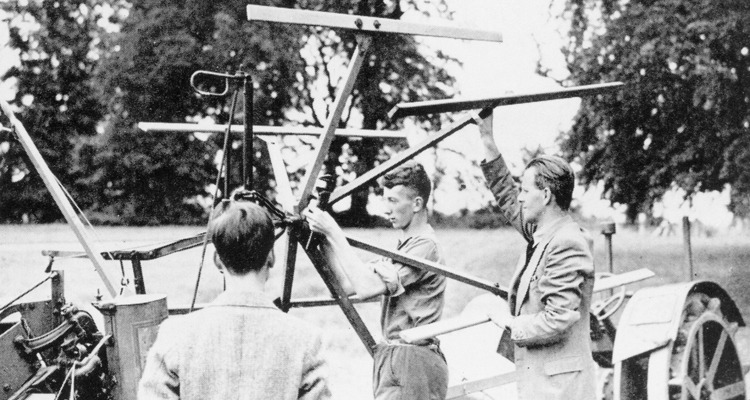 Most Old Stoics will share much the same experiences of the everyday life of the School: the houserooms, the dormitories, the playing fields, the chapel services and so on. As headmasters have come and headmasters have gone, there have been changes, more or less subtle, but the settings and the routines have remained much the same. Therefore, it may be of interest to recall a period when a great deal was different.

I was in Cobham from 1936, when the sense of impending War was felt by everyone, to 1941 when the War was in full swing. JF Roxburgh made a conscious effort to shield us from the full awfulness of it all, and school life went on as before but with notable differences. Food rationing made itself felt and some masters left to join the armed services, but there seemed to be no major upheavals.

We returned to school in September 1938, the time of the Munich crisis, to find two muddy trenches dug in the South Front playing field, roofed over with corrugated iron and earth, for use as air raid shelters. The OTC suddenly became more important. I switched over from the Boy Scouts and in 1940, with invasion threatening, joined the Local Defence Volunteers and proudly displayed my LDV armband. Churchill renamed us the Home Guard.

We enthusiastically laid field-telephone cables as far as the Corinthian Arch, got an old 1914-1918 radio set working with Morse code and took planned exercises and field-days quite seriously, as well as with the usual mirth. The Duchess of Bedford had disappeared piloting a light plane and we scoured the grounds for a crash, with no success. Most memorable for me were the patrols where we used the Bourbon Tower as a lookout and, as the welcome dawn broke, watched the slow sunrise. Armed with live ammunition and our First World War rifles, we were instructed to look out for enemy parachutists, probably disguised as nuns. We did not see any, but I remember well how the uncertain light of dawn can make an innocent bush appear to move quite alarmingly.

In the midst of all this, I prepared for the Cambridge Scholarship Examination in Mathematics and Physics. Freddie Archer, my tutor, was worried about the effect on my school studies and wrote to my parents about it.

I should like here to record a personal memory of JF. I had won the Pearson Smith prize for mathematics and was called to JF’s study where he asked me what book I would like to have.

Seeing that I was totally at a loss, he suggested that I should look around his shelves for something I liked. After some searching my eyes fell on a copy of the only book in circulation that had been written on Stowe, Some notes on the early history of Stowe by a member of the Sixth Form, 1932. It was bound in red leather together with a number of photographs. I thought it would be a good souvenir. Much was my embarrassment when JF told me that it was a replica of the book presented to Queen Mary on her visit to the School. He insisted that I should have a similar copy (bound in the traditional blue leather). The photographs bound in at the end were his own; we had several exchanges of correspondence during the school holidays about which pictures to have and the order in which they should appear. The original negatives were glass quarter-plates and he had prints made in Buckingham. This example of JF’s kindness to a confused school boy was typical of him.

There was a memorable night when a German bomber, returning from a raid and no doubt not wanting to land back home with unexploded bombs in its racks, dropped a stick of about six on the School. They were in line with the buildings, but by luck they overshot and exploded in a line across the South Front playing field. The Housemaster of Grafton sent his house to the air raid shelters. In Cobham we stayed in bed, except in my dormitory where one of us, more daring than the rest, went out to make a reconnaissance. He returned with a grossly exaggerated account of damage to the plaster figures under the South Front portico and, to prove it, claimed he had picked up a private part that had fallen from one of them. In fact, the main damage might have been to the playing field lawnmower. It survived, but on hands and knees we searched the turf for shrapnel that would have ruined its blades. I remember that it was, in fact, quite common to find the tail sections of burned-out incendiary bombs in the grounds. We would have kept them as trophies, but were told to throw them into the Headmaster’s garden in case they still contained something dangerous.

Then there was the fruit picking and the harvesting. During the War it was unpatriotic to take holidays. “Is your journey really necessary?”, asked the posters. Instead, in the summers of 1940 and 1941 parties from Stowe went fruit picking to Rendcombe, Herefordshire and helped with the harvest at farms near Stowe, sleeping in unfamiliar school dormitories. We gathered up the sheaves of wheat, bound with sisal, and made them into stooks. When they were dry we pitched them into a cart and led the horse to the great threshing machine, with its puffing steam engine rented for the day. There we pitched them again to the very top, where the sisal was cut and the stalks thrown into the chute to be threshed. On one occasion that I will never forget, I was set to cleaning out the pigsty. We felt we were “doing our bit”.

Visiting The Chapel recently and looking at the list of the names of those killed in the War, I realised that I recognised perhaps every third name. These were my seniors, the heroes of the first fifteen, of the School, whom we all knew, and also my contemporaries. It was a moving moment for me, and it is not hard to understand how the news of the mounting losses of the pupils he had known and taught made a deep and even devastating impression on JF.

Alas! Unconscious of their doom

No sense have they of ills to come.

Nor care beyond today;

Yet see, how all around ‘em wait

The ministers of human fate,

Ah, show them where in ambush stand,

To make their prey, the murth’rous band!

Ah, tell them, they are men!

Those war years were indeed different.

Stowe prides itself on bringing out the best in its pupils. This has been manifested over the years by the wide range of interests and pursuits taken up by generations of Stoics and encouraged by the staff.

However, one such pursuit was not encouraged, only tolerated: climbing the cedar on the South Front. This magnificent tree, reputedly 130 feet tall, provided an escape from normal routines and a challenge. There were three goals: to reach the Top or the Table, separate platforms at the highest point of the tree, and to reach the Top in the fastest time. The Top had magnificent views of the grounds but could not accommodate many whereas the Table, slightly more difficult to reach, could accommodate more and was hidden from the view of those on the ground. For this reason, it was a favoured place for those who liked an occasional smoke. On the way up, particular combinations of branches had different names: one was the Trapeze, another was named after part of the anatomy of one of the matrons, yet another, the Tightrope, involved (at a height of some 70 feet) walking on a relatively thin branch and balancing by clutching two twigs on either side.

On the speed side, one of the most competent climbers was Richard Wrottesley (Grenville 60), who became an accomplished mountaineer, but the undisputed star was Paul Gallegos (Grenville 65) who reached the Top in 1 minute 29 seconds, if I remember rightly. I used to climb the cedar in the summer of 1960. Sadly there was an accident involving someone falling a year or two later and the lower access branches of the tree were removed.