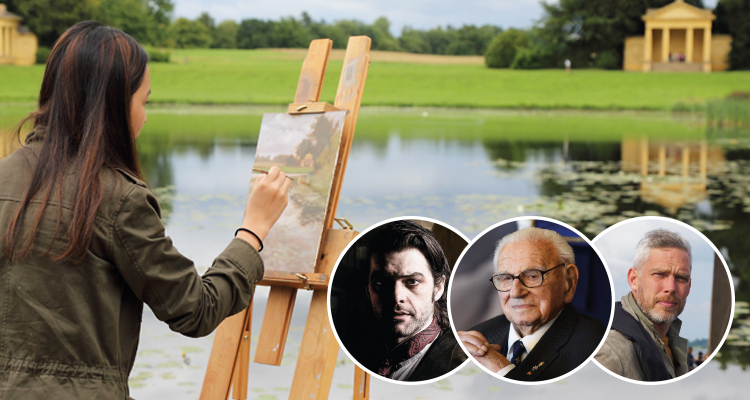 Arts at Stowe has seen some incredible performances this year from our wonderful lunchtime concerts by Music Scholars to the inspired, thought provoking Congreve production of 1984. Stoics paid a poignant tribute to Old Stoic, Group Capt the Lord Cheshire of Woodhall, VC, OM, DSO, DFC (Chatham 36) at a legacy event for the Charity he founded.

As part of our programme supporting the School’s nominated Charity, Leonard Cheshire Disability, the young people told the story of Leonard with a supporting cast of professional actors, featuring Dr Anthony Wallersteiner as JF Roxburgh. Another highlight was the visit from Award winning poet John Agard. This was a truly stunning evening with Stoics reciting poetry alongside the linguistic master, who delighted us all with his animated and charismatic performance.

Once again, the Music Department and others honoured the memory of Sir Nicholas Winton (Grenville 27) at our Holocaust Memorial Event, The Power of Words on 24 January 2018. It was a thought-provoking, touching evening with performances by Stoics and staff.

Art has continued to fan the creative flames, with visiting RA artist David Mach giving an insightful talk to Stoics about his creative process, life and works. Workshops have proved very popular with some wonderful work produced by Stoics in the Liam Biswell Printmaking workshop over two days. The Creative Lives exhibition brought work from Camilla Kingham, Elizabeth Vickers, Jane Corbett and Marie Ackers to Stowe and their private view and, their thought-provoking talk about life as an artist to the Stoics was a huge success. Photography from the past with the Lee Miller exhibition told a wonderful visual story of her life at Farley Farm and her work continues to inspire today.

The Ugland has played host to some wonderful events coming alive with all genres of music, Pop with Mari Wilson, Rock and Jazz with Bernie Marsden and Miles Nottage, world class chamber music and classical performances from visiting professional musicians, brass concerts, big band, Choir concerts, Requiems and piano recitals. The colourful Budapest Café Orchestra brought us their unique visual and musical feast, and the comedy night with the infamous Dr Phil Hammond was a huge success.

Next season, the Music Faculty will be equally enriched with some exciting masterclasses for Stoics and performances from some wonderful visiting musicians. Rising Stars of Stowe performing string and vocal concerts along with the popular State Music Lunchtime Series in the State Music Room, the gifted Mali Mae will be performing for us on 4 March a musical event not to be missed plus a Night at the Musicals on 9 May, featuring favourite songs performed by our wonderful music scholars.

Summer and Easter will see the return of Stowe Creative Academy bringing back the hugely popular Musical Theatre Week, Rock and Pop School, Story Telling Week and Chamber Music Course plus an international Piano School, which will continue to fill the buildings with creativity over the summer. We will also see the return of The Florence Academy courses in August, which have grown immensely over the past three years and now receive international visitors to Stowe wanting to paint in its beautiful surroundings.

Next season’s theatre will embrace our dark side with the production of Dr Jekyll and Mr Hyde on 12 March; various children’s theatre productions; Big Draw Along with artist Nick Sharatt, plus magicians, Morgan and West, bringing their specular show to delight and enthral on 20 April. Summer will see the open-air performance of The Tempest with the grand backdrop of the South Front as its stage, plus the infamous Speech Day Eve concert, which is going to be a truly memorable evening.

Talks held in the State Music Room from visiting historians, authors and Old Stoics have been greatly received. Sam Willis, Historian, started off the new season on 23 February with an informed insight into Nelson and his Navy. We have run a selection of talks and exhibitions with Old Stoics over the years and they have been a resounding success, please let us know if you have any ideas for the Arts at Stowe Programme.

Arts at Stowe membership has grown rapidly to over 300 members and attendance at all our Stoic performances and various events continues to impress and we have received some wonderful feedback. As a parent or Old Stoic you automatically become an Arts at Stowe member, for any enquiries about events please email us at thearts@stowe.co.uk or call us on 01280 818012.

We look forward to welcoming you to one of our events in 2018.

The Arts at Stowe Team