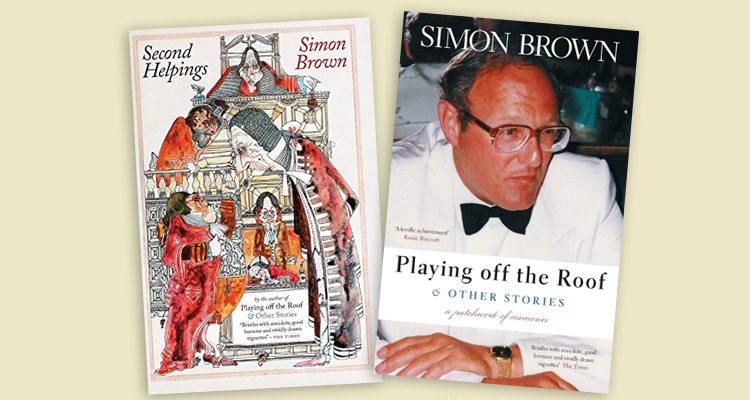 Few, if any, Old Stoics have gone on to become High Court Judges and certainly none to become a Lord of Appeal in Ordinary and then a Judge of the Supreme Court. When the only person who has achieved these heights then writes an autobiography and follows it up with a book of further memories the immediate expectation is that they will be a little dry.

Simon Brown (Chatham 55) or, to give him his full title, Lord Brown of Eaton under Heywood has avoided that accusation entirely. The two books, Playing off the Roof and Other Stories and Second Helpings are amusing and very easy to read.

In Playing off the Roof, Simon Brown runs through his life lightly and with considerable humour. He came from what was a prosperous and well-connected background, as he freely admits. He made good use of it though, apparently mostly to assist in covering his relative lack of effort as a boy and then a young man.

Simon was at Stowe in the 1950s when the School had a reputation for being a country club as much as a school. He was an excellent sportsman and claims that really, he spent most of his time playing games rather than doing school work. He admits though that he was enthused by Bill McElwee sufficiently to study history properly.

Although the impression is that Simon did little or no work at Stowe he must have been a secret worker since, even in the 50s, you had to show considerable intellectual ability to get a place at Oxford to study history.

This theme continues. At Oxford, again he enjoyed sport and found he had to switch to law because he had not studied enough history. Law normally requires more work than history so one wonders if there may have been a little more to the switch.

To be fair, Simon treats his time as a barrister in a similar vein. He runs through his career as a barrister up to the time he became a “Treasury Devil” with a very light touch. He avoids making it a list of cases and, as a result, it is both interesting and a good picture of life as a barrister.

He does not trumpet his achievements – though to become a Treasury Devil is a tremendous achievement as the role is only offered to the highest performing barristers. He does mention other Treasury Devils to indicate how much of an accolade it was to become one, but more by way of anecdote than to boast about it. The same applies about his life as a High Court Judge. You might think that everyone gets to be appointed to the High Court though patently this is not correct. The way he treats this is gentle and he makes his time there interesting and informative. One thing that is very different then was how well treated judges were in the 80s and 90s with butlers and grand lodgings. Nowadays they often just stay in a hotel.

His progression to the Court of Appeal, the House of Lords Judicial Committee and the Supreme Court is given the same light touch.

Sport and, in particular, golf is given at least as much prominence as rising to the very top of the Judicial pole. He takes this very seriously and it runs through his life from school onwards.

In Second Helpings Simon adds more cases and anecdotes. Here it is more a case of lots of vignettes about life in the law. These are varied and amusing, ranging from cases where the barrister asks one too many questions and goes from a certain win to an unfortunate loss, to cases of particular interest to comment on how judges should, but did not, behave.

Both books are an excellent read. They give a picture of a true all-rounder in an amusing and modest way.