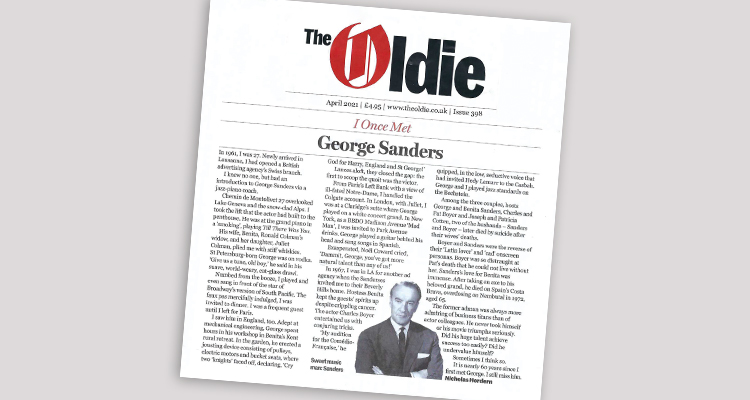 I ONCE MET GEORGE SANDERS

In 1961, I was 27. Newly arrived in Lousanne, I had opened a British advertising agency’s Swiss branch.

I knew no one, but had an introduction to George Sanders via a jazz-piano coach.

Chemin de Montolivet 27 overlooked Lake Geneva and the snow-clad Alps. I took the lift that the actor had built to the Penthouse. He was at the grand piano in a ‘smoking’, playing Till There Was You.

His wife, Bernita, Ronald Coleman’s widow, and her daughter, Juliet Coleman, plied me with stiff whiskies. St Petersburg-born George was on vodka. ‘Give us a tune, old boy,’ he said in his suave, world-weary, cut-glass drawl.

Numbed from the booze, I played and even sang in front of the Star of Broadway’s version of South Pacific. The faux pas mercifully indulged, I was invited to dinner. I was a frequent guest until I left for Paris.

I saw him in England, too. Adept at mechanical engineering, George spent hours in his workshop in Benita’s Kent rural retreat. In the garden, he erected a jousting device consisting of pulleys, electric motors and bucket seats, where two ‘knights’ faced off, declaring, ‘Cry God for Harry, England and St George!’ Lances aloft, they closed the gap: the first to scoop the quoit was the victor.

From Paris’s Left Bank with a view of the ill-fated Notre-Dame, I handled the Colgate account. In London, with Juliet, I was at Claridge’s suite where George played on a white concert grand. In New York, as a BBDO Madison Avenue ‘Mad Man’, I was invited to Park Avenue for drinks. George played a guitar behind his head and sang songs in Spanish. Exasperated, Noël Coward cried, ‘Dammit, George, you’ve got more natural talent than any of us!’

In 1967, I was in LA for another ad agency when the Sanderses invited me to their Beverly Hills home. Hostess Bernita kept the guests’ spirits up despite crippling cancer. The actor Charles Boyer entertained us with conjuring tricks. ‘My audition for the ‘Comédie-Française,’ he quipped, in the low, seductive voice that had invited Hedy Lamarr to the Casbah. George and I played jazz standards on the Bechstein.

Among the three couples, hosts George and Bernita Sanders, Charles and Pat Boyer and Joseph and Patricia Cotten, two of the husbands – Sanders and Boyer – later died by suicide after their wives’ deaths.

Boyer and Sanders were the reverse of their ‘Latin lover’ and ‘cad’ onscreen personas. Boyer was so distraught at Pat’s death that he could not live without her. Sanders’s love for Bernita was immense. After taking an axe to his beloved grand, he died on Spain’s Costa Brava, overdosing on Nembutal in 1972, aged 65.

The former adman was always more admiring of business titans than of actor colleagues. He never took himself or his movie triumphs seriously. Did his huge talent achieve success too easily? Did he undervalue himself? Sometimes I think so. It is nearly 60 years since I first met George. I still miss him.