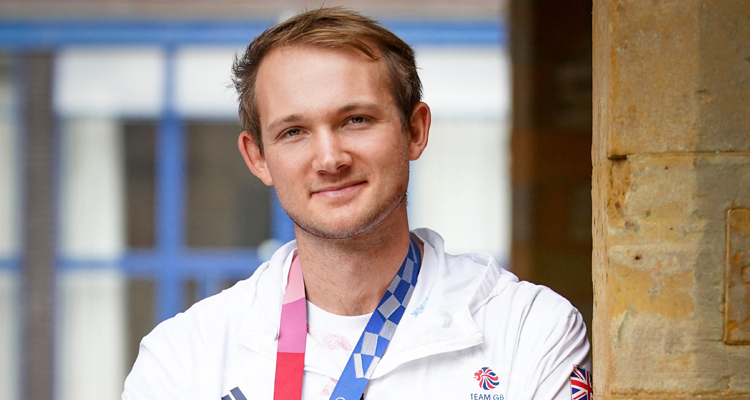 In July 2021, James Rudkin (Walpole 12), made time during his busy rowing training camp in Lake Como, Italy, to talk to Cath Clarke from the Stowe Admissions and Marketing Department about being selected for the Great Britain Men’s Eight (M8+) team who competed in the Tokyo Olympics.

Your Father coaches rowing at Stowe, was it his influence that got you into rowing?

Yes, my Dad (Andrew Rudkin) was a really good rower when he was younger, and he still rows now. He coached me, has inspired me and got me into the sport. I’ve taken from him the enjoyment of the sport; I’m where I am because I love rowing, I don’t ever feel bored, I love every minute of it, even the bad bits are awesome, they just make me want to come back stronger and perform better.

What sports did you do at Stowe?

My parents encouraged me to do sport alongside my schoolwork. They didn’t want me to be inside all day and encouraged me to be active. I tried and played lots of different sports. I found hockey good fun but was awful at it; I was too tall (I’m 6ft 6”) and I was scared of being hit by the ball! I was pretty good at rugby and played quite a lot, but when I got to the Sixth Form, I whittled it down to rowing as the one sport that I decided to take more seriously.

What have you been doing since Stowe?

I went to Newcastle University and studied Politics and History as an undergraduate, then stayed to do a Masters in History. Since then I’ve been rowing full-time!

It’s very full on! Training begins around 7am with the first session, which is around a 90-minute row on the lake. We start early as the weather is generally calmer on the water at this time. A 90-minute gym weights session follows, before a second breakfast, then I’ll do another weights session before lunch. Finally, it’s one more row of about 90-minutes (either on the water or on the Ergo in the gym), finishing the day around 4pm. We train seven days a week, although we get half days on a Wednesday and Saturday. I won’t have a full day off without any training, prior to the Olympics.

Is it hard to spend so much time with the same people?

Thankfully, all my teammates and the squad get on well. Several of them were guys that I rowed with when I was a junior, in fact, one of the crew, I did my first GB international race with when I was 17! We’re very lucky that we have a group that is very cohesive and everyone gets on really well. If you are having problems, you have to get them out in the open and deal with them.

How do you feel physically at the end of the race?

The race is about five and a half minutes long. By the time you cross the line, you can’t breathe, your legs are just burning and you can’t really move your arms and fingers properly, because they’re all cramped up. The relief of crossing the line is incredible, because you don’t have to keep going anymore!

What are you looking forward to most about the Olympics?

Obviously, the racing is going to be awesome; doing everything to put out my best performance and see what happens. I know we have the capability to win (and it would be amazing if we can do that), but the main thing I want is to feel that we’ve achieved the best we can, whatever the result.

Due to Covid-19 there have been two announcements; I was selected last year in March, lockdown happened and the Olympics were postponed. That was pretty bad as I had worked for four years to get to that position. I had finally got there and the games were cancelled. It meant I had to reset and go again, to try and be better next time. I set myself small goals; the Olympics is a massive goal, but you can’t get there without taking smaller steps and achieving those along the way. After the second announcement this year, it felt like my selection last year was vindicated. Being selected was just the start though, it’s now about making myself better than I was at the time of selection, and getting to the start line in a better place.

Do you see yourself staying in sport after you retire from professional rowing?

I’ll always be active and take part in sport, but I don’t think I want it to be my entire life. I feel very lucky to have gained an excellent education at Stowe and then attend a good university. I’ve been very fortunate to acquire these extra skills and qualifications and I’d like to use them.

Three words to sum up your time at Stowe?

Inspiring. I definitely think the House, grounds and the architecture are amazing and inspiring. It was one of the reasons my parents picked Stowe.

Challenging. I was challenged by my teachers, especially as I went through the School. I had a really good Economics teacher, Kevin Reiss, who had previously taught at Oxford. When I got a decent mark in an exam or assessment, he wouldn’t be happy with it, saying “You’re better than that” followed by “Here’s how we’re going work to make you better” and I ended up achieving an A in Economics.

Supportive. The Head was always extremely supportive. Not many pupils rowed, and he could have easily not given me the freedom that I needed to progress; to have a day off to be able to race, or go to a trial, or he could have persuaded me to play another sport. My Houseparent could also have pushed me into playing House Rugby more but both the Head and my Houseparent said that rowing “Is clearly something you really want to do and could be quite good at, so we’re going to give you the freedom to do it”. That support was invaluable. 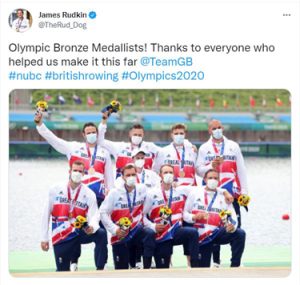 Since this interview, James and the Men’s Eight went on to win the bronze medal at the Olympics for Team GB. Following the race, James tweeted:

Olympic Bronze Medallists! Thanks to everyone who helped us make it this far @TeamGB
#nubc #britishrowing #Olympics2020.

A huge congratulations to James and the team. We eagerly await any announcements for Paris 2024.