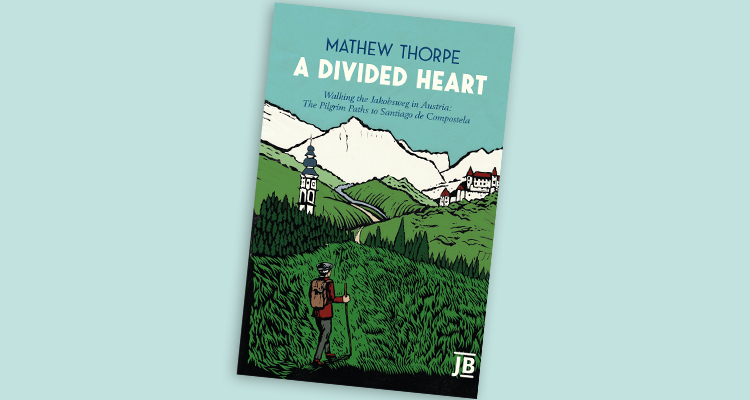 It might have been assumed that Mathew Thorpe would have rested on the laurels of his stellar careers at the Bar and on the Bench.  Not so: he now walks purposefully in the tracks of those such as Robert Louis Stevenson and Patrick Leigh Fermor who have beguiled the reader with tales of travel. A Divided Heart is a remarkable book. It recounts with elegance and humour Mathew’s peregrinations over seven years through Austria, following the Jakobsweg. In the Middle Ages Austria was “an artery in the bloodstream that connected all Europe to Sanatiago de Compostella”. After near extinction over the centuries, the Way of St James became the first European Cultural Route in 1987. The Jakobsweg in Austria was revived from the mid-1990s: “it is no longer primarily a Catholic penitential way but the principal contemporary incentives are a search for nature and a rejection of the consequences of industrialisation”. Mathew undertook four walks on the principal stretches of the Jakobsweg, traversing the length and breadth of Austria.

The book is imbued with the author’s love of Austria: “She sits serene, a sun-lit beauty”.  Mathew is at heart a true European, which makes the publication of this book, not long after the final implementation of Brexit, particularly poignant. Mathew’s exploration of the Austrian Jakobweg commenced just before he retired as Head of International Family Justice. Many of us remember the distinction he brought to that role and the relations he fostered across a multiplicity of jurisdictions.

The book is first and foremost a fascinating travelogue. It was originally intended to be “a simple guide for the use of one who reads English but not much German”. But it has evolved into far more than that. It is a wonderful read for those, like me, whose walking is of choice largely confined to the precincts of the Temple. The countryside comes alive in the pages; we are transported to the banks of the Danube where the “steeply rising terraces are planted with grapevines and apricot” and to those of the Inn where “a heavenly walk” follows “a valley which is forested on both its sides”. We see the “forest floor carpeted with wood anemones and other delights including cowslips and wild strawberries” and marvel at the beauty of the Wilder Kaiser mountains revealed by “melting cloud”. Not that all is idyllic: we are chilled by “snow, which had started at eleven in the morning, continued unabated for more than seven hours…Under foot, every step would be sloshing wet”.

A major focus is Mathew’s account of the many churches, monasteries and abbeys visited along the way: not just the architecture (frequently of Baroque splendour) but also the clergy (sometimes idiosyncratic), holy offices and monastic observances. Mathew’s visits to Kremunster convinced him that he “could no longer remain an outsider, a spectator at the worship upon which the life of the abbey is founded”. He was confirmed in the Catholic faith in June 2015, not in Austria but in Devizes.

Those with a taste for creature comforts will relish the vivid depiction of stays in many a gasthof and landhaus, some good and some decidedly bad. Dinner ranges from “a huge helping of venison and red cabbage with two viertel of good wine” through “an excellent omelette” to “only the cold plate of meat and cheese known as a Jauseplatte”. Telephone numbers are provided for highly recommended establishments. Very amusing is Mathew’s candid account of his using breakfast ingredients to assemble a piece for consumption during the course of the day’s walk. Also, strikingly personal are the misadventures encountered along the way, such as the disaster of the loss of a brand-new cardigan, which led Mathew to develop “a way of fastening the rucksack zips to eliminate the spontaneous opening from the pressure of the crammed contents”. Many fine cities are to be found along the Jakobsweg: Salzburg, Innsbruck, Passau, to name but a few. Hidden as almost a postscript at the end of the book is a chapter The History and Sights of Vienna, in fact an excellent guide to this richest of European capitals and the city which Mathew has come “to love…best”.

The book contains some astonishingly personal glimpses of those whom Mathew “loved and lost during the seven years over which I spread the pilgrimage”. I have long pondered the significance of the title: divided between what? Women? Religions? Countries? Cities? I have deliberately refrained from asking the author to reveal the mystery.

At the outset of the walks in June 2013, Mathew was seventy-four years of age; at the conclusion in August 2020 he was eighty-two. He has “reached a spatial end: there are simply no more kilometres to walk”. Matthew speculates that he may have “reached a physical end: I have exhausted my strength and stamina”. Having seen him at a Bencher’s Amity dinner in Middle Temple in July 2021, I am glad to report that this is the only inaccurate sentence in the whole book.

Mathew Thorpe requests that all purchase enquiries be made to thorpe@1hc.com