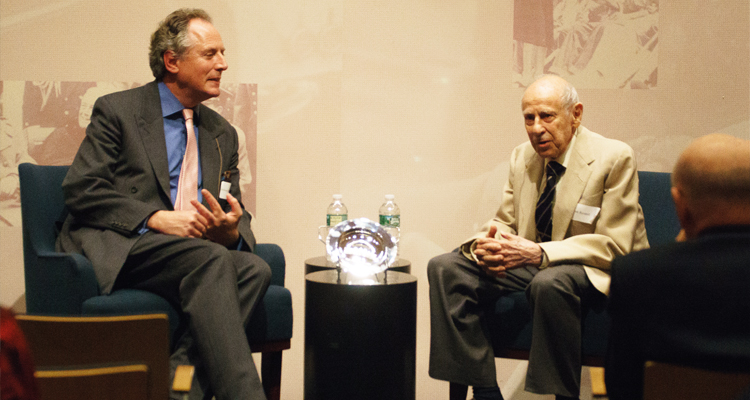 American Friends of Stowe (AFS) enjoyed another banner year as it continued to grow, offering a variety of social, educational and fundraising programmes all aimed at supporting the School and its community abroad.

The organisation is now approaching 400 members comprised of Old Stoics, Stowe Parents, former Stowe-Harvard Fellows and other supporters of the School.

Most recently, AFS hosted its annual cocktail event in Manhattan attracting nearly 100 attendees including, for the first time ever, current Stoics visiting New York for an Art Trip. The venue was the Roosevelt House, giving guests a rare glimpse into the gorgeous townhouse that was the New York home of Franklin and Eleanor Roosevelt. Headmaster, Anthony Wallersteiner was a guest of honour, delivering an update with news from Stowe.

The fourth American Worthies Award was given to Steve Ausnit (Cobham 42), followed by a ‘fireside chat’ with the Headmaster. Steve recalled his journey from Romania on the brink of World War II to Stowe, and onward to the United States, where he invented technology that would lead to the development of the Ziploc bag and has since become an important supporter of Stowe.

The year’s other highlight was the annual banquet at the School, celebrating the Stowe-Harvard Fellowship. For more than two decades, American Friends of Stowe has sponsored one Harvard graduate to spend one year teaching and living at Stowe, fully immersed in the School’s academic and pastoral activities. The 2017 Fellow, Sandy Wong, gave an inspiring speech reflecting on her year at Stowe and the many ways she affected, and was affected by, the Stoics she met.

The dinner also honoured Lee Sprague, wife of Hon. George R. Sprague, who passed away in 2016. Lee was on hand as the fellowship was officially renamed the ‘Sprague Stowe-Harvard Fellowship’ in recognition of the many years of support her family has provided to the programme.

Old Stoics or other friends of Stowe who find themselves in the United States, we invite you to contact us via our Facebook page so we may include you in our events and communications.