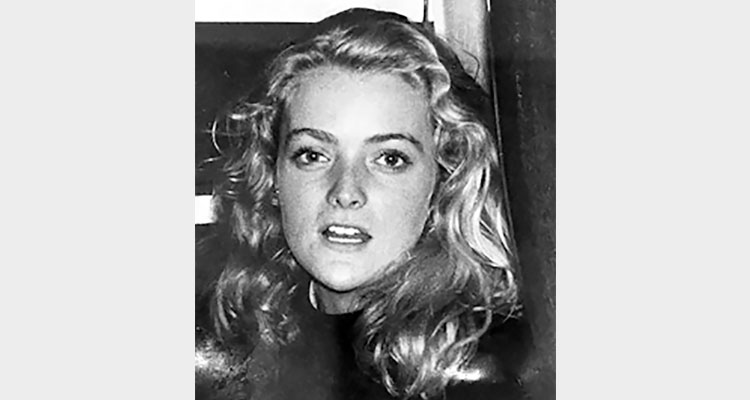 Alison Arnott (née Howard, Nugent 91) has kindly sent in her memories of Laura and this wonderful photograph, showing Laura whilst at Stowe, taken by the ’phone booth in Nugent. The photo was taken by Luc Ferrand (Cobham 91) who sadly died in 2014.

I was lucky enough to meet and make firm friends with Laura on my very first day at Stowe in September 1989. We had very different personalities but found immediately that we had a lot in common and I felt I had truly met a kindred spirit in Laura.

We spent the next two years having a ball, performing in the Temple House play and subsequently spending much time with Marco Baldini (Temple 91) and Edward Shillington (Temple 91); competing in the British Schools Clay Pigeon competition; singing Respect by Aretha Franklin in the House Song competition and enjoyed visiting a Mrs Mann in sheltered housing in Buckingham as part of our Service in the Community programme at Stowe.

Laura was very creative and enjoyed her Art A-level at Stowe. She had a very good singing voice and excelled at Maths. On leaving Stowe, she studied Art at Newcastle. When she moved south, we continued to have fun in our twenties, living near each other in London, backpacking in Africa and we then saw each other when she moved to Cheltenham and Edinburgh after she married. Mostly we just laughed and laughed.

She always claimed to have saved my life on two occasions: once when climbing Mount Mulanje in Malawi when we came across a man in the dark with a machete and no spoken English and secondly when she performed the Heimlich manoeuvre on me after I swallowed a fish bone.

She met James Jack in London at a party hosted by Nicola Morrison (Nugent 91) and they were married in February 2003. Unfortunately, the marriage broke down but they remained very good friends, the friendliest divorced couple I have yet to come across.

Whilst not following a conventional career path, Laura was a real grafter and tried many jobs during her life including pig farmer; landscape gardener (Amanda Holden was one of her clients); sheep farmer; potter; specialist painter and even turned her hand to dry stone walling. Nothing phased her and she was determined to provide for her family.

Laura tragically died in a road accident in Thailand in December 2016. She (and I) would say her finest achievements were her four children, Robbie, Annie, Lily and George. She was an amazingly loving mother and would be very proud of them now coping with their bereavement with the help of her ex-husband, James and her sister, Rosie.

Rosie and James quite rightly decided that a small family only funeral would be the least traumatic option for her four young children. Her ashes are buried at Bledington Church in Gloucestershire alongside her mother, Sheila and her stepfather, Brian Lockhart.

I am hoping to arrange an Old Stoic lunch to celebrate her life and will happily include her many other friends made at Hatherop Castle and during her life in London and Gloucestershire. If you would like to be involved, please email alisonrarnott@gmail.com

Laura is survived by her four children, Robbie, Annie, Lily and George, her father, Ross and her sister, Rosie.