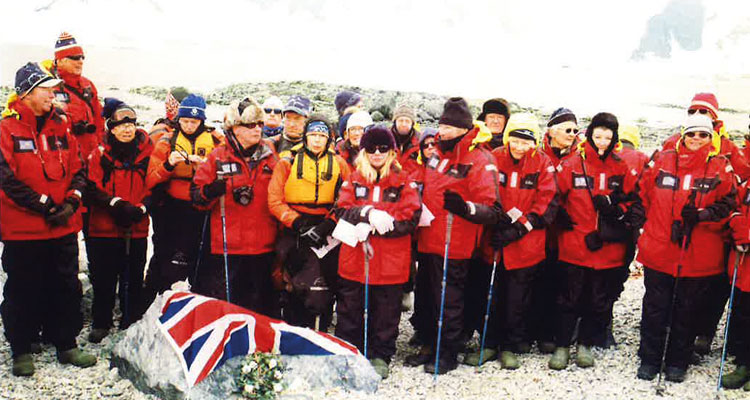 Robin writes, “I had the good fortune in 2016, of visiting the Antarctic on board the Russian survey ship, The Akademik Ioffe and Henry Worsley (Grafton 78) was to join us as our guest lecturer, celebrating the hundred years of Shackleton’s epic voyage from the wreck of The Endurance trapped by pack ice in the Weddell Sea, via Elephant Island, to eventual rescue by sailing the open boat James Caird to South Georgia, finally making an incredible crossing of South Georgia to their destination of the Whaling Station at Stromness Bay.

The hero of that remarkable voyage was no less than the New Zealander, Frank Worsley, who happened to be Henry’s forefather, chosen by Shackleton as his Captain. Worsley’s brilliant navigation skills enabled the whole party to have survived such an ordeal. Very sadly for us, Henry’s death denied us his story of Shackleton and his own endeavours in crossing the Antarctica continent with his tragic death on 24 January 2016, within thirty miles of his target.

The photograph shows a service held in memory of Henry at George’s Point, Cuverille Channel amongst a colony of penguins and seals, on 14 February. Knowing that Henry captained Stowe’s cricket team, we felt it appropriate to play a game of cricket in his memory at the Old Whaling Station on Deception Island and I was honoured to be appointed one of the umpires.

Henry was described in his obituary as having a distinguished 36 year career in the Army and his love and challenge of Antarctica, based on reading about Shackleton’s Story of the Endeavour, during his boyhood days. Henry was, in my mind, an equipage of his services to Stowe and I’m sure that his memory will live on forever in the annals of Stowe and its achievements.”