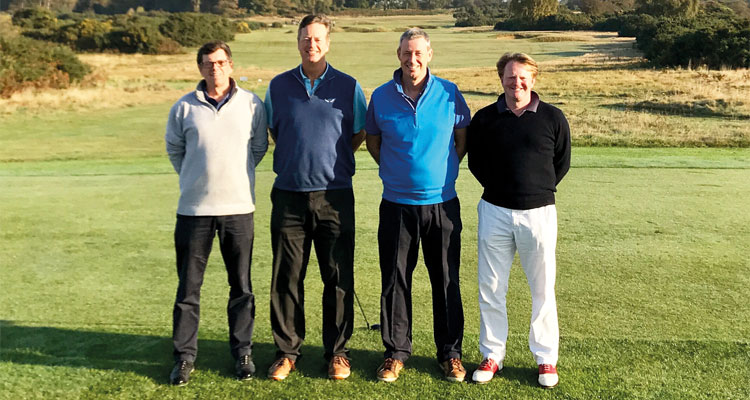 2017 was a busy year under the excellent Captaincy of Nick Luddington (Chatham 78) with a larger fixture list of team events, matches and meetings.

Halford Hewitt: Led by Haydn Brooks (Cobham 04) the team had a close loss to Aldenham in the first round. Good wins in the plate against St Bees and Greshams were followed by defeat to a strong Bedford line up. Grafton Morrish: An understrength team did not qualify for the Finals. Dick Watson Trophy: Jeremy Scowsill (Temple 76) Ian Bendell (Walpole 87) William Hill (Grenville 75) and Nigel Wright (Chatham 78) came an excellent third of 15 teams in the Dick Watson Trophy at Aldeburgh beating previous winners, Uppingham, in the Sunday play-off round and only missed out on the final by one point. Cyril Gray (Over 50s): Led by Stewart McNair (Grenville 71) the team edged a 19th hole win over St Pauls in the first round but suffered a 19th hole loss to Ampleforth in the next round.

Matches: In addition to playing the School team at Woking, Stowe (twice), Sunningdale and Stoke Park, there were matches against Haileybury and Canford at Sunningdale, The Templars at Deal, Downside at New Zealand and Aldeburgh Golf Club. The Society won six, lost three (all against the School) and halved two of the matches with the highlight a first win for six years against Haileybury.

Meetings: The Society Meetings were held at Formby (Northern Meeting with over 20 players), Woking (Spring Meeting), Aldeburgh (Summer) and Brancaster (Autumn). The performance highlights were Sean Morris (Walpole 87) winning the Hadfield Salver at Formby, Charlie Saunders (Cobham 98) the Memorial Bowl and Josh Wheeler (Walpole 07) and Freddie Elliott (Cobham 12) the foursomes at Woking while Jeremy Scowsill (Temple 76) and William Hill (Grenville 75) combined well for a great score at Aldeburgh. Charles Consett (Cobham 96) and Angus Campbell (Cobham 96) beat Chris Luddington (Chatham 82) and Nick Luddington in the final of the Lucas Langley Salvers at Brancaster to stop a Luddington hat-trick of wins.

More young golfers wanted: 70 different Old Stoics played in the 2017 fixtures but the number of under 30 year olds only showed a small increase. We want more young players of all standards to be involved in the Society and discounts are available to under 30s for all matches and meetings. Roddy Blackburne (Walpole 12) rblackburne@hotmail.co.uk has been appointed to the Committee with specific responsibility for encouraging more young Old Stoics to take part.

The year ahead: 2018 promises to be an exciting year with new fixtures including an Under 30s v Over 30s match near London and the Midlands Public School Meeting at Little Aston in June. The Society continues to work closely with Andrew Hancox, School Golf Professional & Master of Golf, to develop even closer links between the Society and the School. Although First Team Captain, Haydn Brooks (Cobham 04) haydnbrooks@gmail.com would like to hear from low handicap players for the Halford Hewitt and Grafton Morrish teams, players of all standards and eras, male and female, are welcome at our matches and meetings taking place at some of the best courses in the country.

If anyone wants to know more about the Society, look on the Stowe website, visit our Facebook page or contact the Secretary, Peter Simmons pjgsimmons@gmail.com or 07957 141826