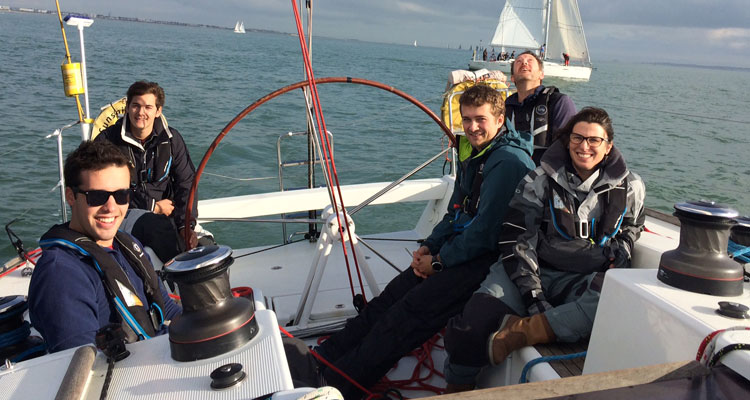 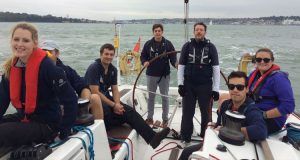 The Old Stoic Sailing Team made waves on Friday 13 – 15 October 2017. For the first time in five years, Stowe took part in The Arrow Trophy, an annual sailing regatta between ‘Old Boys’ of Independent Schools. The event takes place on the challenging waters of the Solent, aboard Sunsail’s fleet of Beneteau 40 yachts. This year, there were 25 boats in the fleet. Each school’s crew collected their yacht from Port Solent (Portsmouth) on Friday, and sailed, or motored, over to Cowes Yacht Haven on the Isle of Wight ready for race briefing bright and early, at 8am on Saturday.

While most members of the crew knew their Port from their Starboard, we made the most of the opportunity to meet early on Friday to get a feel for the boat, get to know one another giving Euan a chance to allocate jobs for the crew. In fact, our Friday warm up was some of the best breeze we had over the weekend and great way to blow away the cobwebs before the racing started.

The weekend is a perfect mix of sailing and socialising. A series of short fleet racing between the field of 25 participating boats on the Saturday, finishing up in Cowes late afternoon, followed by the Arrow Trophy Dinner at Cowes Yacht Haven in the evening. The first four boats from Saturday’s races competed against one another on Sunday. The winners will be awarded their trophies at the 2018 dinner. The rest of the fleet enjoyed a couple of ‘friendly’ races on Sunday morning before returning back to Port Solent, with a chance to admire the Spinnaker Tower, Mary Rose and spectacular sights of Portsmouth from the water.

After five years’ absence from the Arrow Trophy, we are delighted to have participated and hope to improve our race position next year, although this year’s crew were happy just to have taken part. There’s also a possibility that the OS Sailing Club (there’s even an OSSC trophy presented as part of the raft of Arrow Trophy awards) may enter a boat in the Round the Island Race 2018. If you are interested in taking part in OS Sailing events please contact Euan Welsh by emailing euan.welsh@gmail.com and follow us on Facebook.