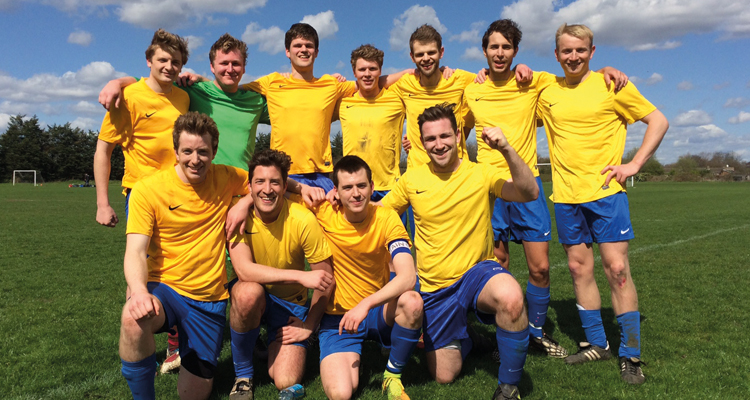 This year has seen a change of captaincy, with Alex Jollivet (Grenville 08) formally taking on the role from James Robson (Walpole 05), having effectively done it unofficially the previous year too.

However, performances on the field have remained similar with the Club finishing in the bottom half of Division Four of the Arthurian League in the 2016-17 season and looking on course for more of the same this season, as we reach the midway point before a break for Christmas and New Year.

When the core players, consisting of goalkeeper Mark Thompson-Royds (Chatham 07), defenders Harry Wolrige Gordon (Chatham 08), Ben Hirst (Chatham 05), Rupert Rowling (Cobham 05) and Hamish Eggins (Temple 09), midfielders of Jollivet plus Thomas Benyon (Walpole 10) and the two Jamies, Jamie Hirsch (Walpole 08) and Jamie Hirst (Walpole 08) allied to the attacking duo of Olivers, Oliver Leech (Temple 10) and Oliver Trotter (Grenville 10), the Old Stoics can beat any side. However, fitness and availability makes this XI seldom grace the field together and in effect results are wildly inconsistent.

The Club is in urgent need of the most recent leavers, who are undoubtedly filled with talent, to join and allow the side to progress up the leagues. Home matches are played on grass on Saturdays in Barnes Bridge/Chiswick area. Anyone interested please get in touch with either Alex Jollivet on 07886 717043, Oliver Leech on 07824 363417 or Rupert Rowling on 07833 694336.