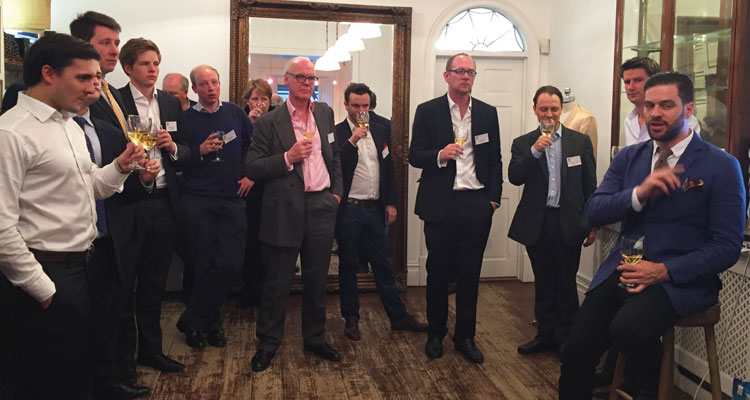 In November 2015, James Sleater (Chatham 99) and I got on board to help run the organisation of the OS Corkscrew Society.

For those of you who were not lucky enough to take part in this at Stowe, every few Sundays there would be a wine tasting event held for the lucky few who had written a brilliantly polite letter to the relevant Master, explaining why you would be the perfect candidate for the Corkscrew Society. It is true that for an 18 year old adolescent it was absolute heaven – an excuse to drink and pretend that you’re only there for academic reasons, whetting the taste buds with fermented grapes to acquire the taste of excellent wine. Well, most of us got (what we thought was) pretty sozzled.

This year, we have held three wine tastings at James’ glorious shop, Cad and The Dandy on Savile Row. Although, unlike the old days at Stowe, we were not avidly guarding the wine bottles or breathalysing people once they had returned to their houses.

Our first wine tasting was run by GQ’s Sommelier of the Year, Michael Sager on Tuesday 19 April 2016. Michael owns two of the best wine bars in London, Sager & Wild and Mission. The tickets were limited to 30 people. Within five days the tickets were sold out and we were still receiving requests for more people wanting to join and others even wanting to conduct their own wine tasting session. In short, it was a huge success. Michael demonstrated an incredible range of knowledge.

On Thursday 23 June, we had an Italian Wine Tasting with Atlas Fine Wines, led by the marvellous and brilliantly enthusiastic Steve Weids. Steve separated the 15 different wines into different regions, Piedmont, Tuscany (International Varieties), Tuscany (Sangiovese) and sparkling wine from Ca’ del Bosco. A grand total of 44 people attended this event, again, a huge success. Steve and the team were mixing with the crowd sharing anecdotes, asking questions and generally being the fountain of wine knowledge.

We needed to finish the 2016 events with a bang, so that’s just what we did, equipped with a bottle of champagne and a sword, obviously. Tickets were limited to 30 people for an exquisite three course dinner on Tuesday 27 September, catered for by Zara White (Lyttelton 06). Guy Boursot, a man of many hats in the wine world: a wine writer/presenter, a vineyard tours business and a retail wine business with two shops just outside Calais. Safe to say, this gentleman knew his wine. Guy’s charm and charisma held a beautiful ambience in the room as he guided us through a variety of Champagnes. After Zara’s delicious food, Guy leant down to pick up his sword, strode over to the other side of the room, and chopped off the top of the Champagne bottle!

The perfect end to a successful year of the OS Corkscrew Society.