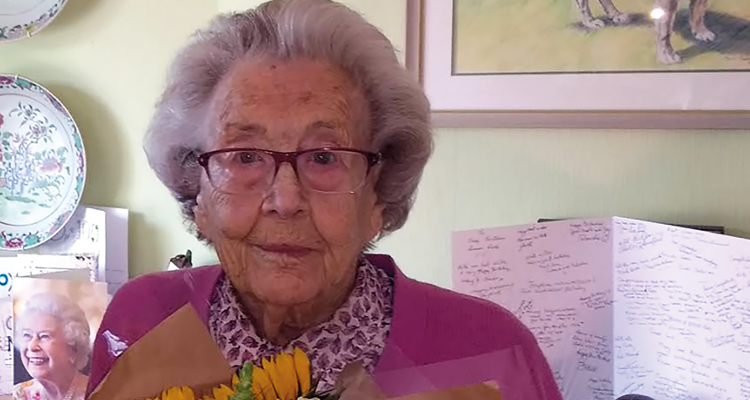 Liz Zettl, whom we warmly congratulate on her 100th birthday, has fascinating links with Stowe’s early days.

Daughter of a London stockbroker, she arrived in 1938, as Miss Elizabeth Duncan, to work for Major Russell in the Bursar’s office (then situated at the end of Plug Street, overlooking Walpole). There one day, JF Roxburgh came in to find her surrounded by 21st birthday cards and telegrams. Two hours later the charismatic JF returned, a bottle of port in hand.

In 1942, when running the school telephone, Liz had to leave for war work. The parting was all the more poignant as she had already fallen in love with a handsome head of Modern Languages, Ewald Zettl (Former Staff 1935-66), whom she had met as a fellow member of a small team responsible for blackout. However, she kept in touch with both Ewald and JF, and after a springtime wedding in 1947 she duly returned as Mrs Zettl.

They were soon entertaining JF in their first home, Buckingham’s Bourton Mill. “I shall come in a dinner jacket and soft collar, unless otherwise instructed”, he had written beforehand. With her sunny outlook and great gift for friendship, Liz proved a lively addition to the Stowe community. She and Ewald were to spend many years in Grooms Cottage, Dadford. Its proximity to Silverstone was an attraction for both, and Liz worked there in a number of important secretarial roles. But Stowe has always been the centre of her busy universe.

In 1965, the pair moved into 34 High Street, Buckingham, which they had acquired four years earlier and boldly renovated themselves. Though Ewald’s retirement was troubled by recurring illness, for over a decade they enjoyed many thrilling adventures abroad by car, most notably to his native, much-loved Austria. The Zettl sense of fun remains infectious.