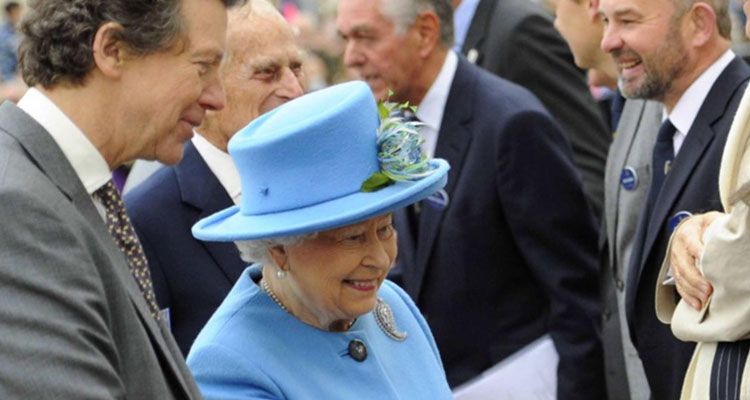 Peter with The Queen

I have been very lucky to enjoy good health, a fantastic family life with my wife Annie and two sons, and to have achieved (more by luck than judgement) a varied and rewarding career in the construction industry. Sport was always the main attraction for me while at Stowe, and after leaving I played rugby for Rosslyn Park when working in London and gaining professional qualifications with the Chartered Institute of Building. My rugby playing gave way to coaching when the boys were young, which I’ve only recently given up now that they have left home, but I still enjoy golf, sailing and skiing when I can. Having worked and travelled in both America and Australia, we settled in Chichester where I ran my own construction management business. We moved to West Dorset 14 years ago when I joined the Duchy Of Cornwall in Dorchester. The Editor of The Corinthian asked me to write a few words about my time there.

For those who might not know, the Duchy of Cornwall is a well managed private estate, established by Edward III in 1337. Revenues from the estate are passed to His Royal Highness The Prince of Wales and Duke of Cornwall, who uses them to fund his public, charitable and private activities and those of his family. The Duchy consists of around 53,000 hectares of land in 23 counties, mostly in the South West of England. The principal activity of the Duchy is the sustainable, commercial management of its land and properties, as well as its financial investment portfolio.

I am Project Manager for the Duchy’s two large mixed use urban developments in Dorset and Cornwall.

Poundbury, in the county town of Dorchester, Dorset, was started over twenty years ago and when complete will have over 2,700 homes, including social housing, and a variety of different places of work. The current population is about 3,000 and there are a further 2,100 people working in over 185 different businesses on the development, including independent local businesses as well as those with UK and worldwide focus.

In Cornwall, the work at Nansledan, in Newquay, started three years ago concentrating at first on the required core infrastructure, ready for the planned 3,500 homes and additional businesses. At present there are 30 homes completed and 200 under construction.

Both schemes deliver the same principles of mixed use and sustainable communities whilst having an architectural character in keeping with their local areas. The architecture always provokes a lively debate, especially at Poundbury, but both sites demonstrate that there is a genuine alternative to how we build new communities in this country, and despite my obvious bias I have yet to see better.

The Sustainability Agenda for the Duchy is a particular focus for His Royal Highness. The use of local materials and improving thermal efficiency of the buildings within a traditional architectural envelope is an important part of this. In Poundbury, we also set up JVE Energen, a joint venture company of which I am a Director, to both build and operate an Anaerobic Digestion Plant to provide renewable energy to the local community. It opened in 2012 becoming the first plant in the UK to inject cleaned Biogas directly into the national grid. It serves over 6,000 local homes in winter and over 60,000 homes in the summer. We make a net carbon saving of over 6,000 tons per annum.

The delivery of such varied schemes in two counties calls for a huge team effort and over the years I have been fortunate to work with some extremely talented colleagues, developers, consultants and designers. Old Stoics, Mr Benjamin Bolgar (Lyttelton 85), from the Prince’s Foundation, assists with the master planning in both Poundbury and Nansledan, and Mr Francis Terry (Chatham 88), designed many of the buildings in the new main central square in Poundbury, Queen Mother Square. There were some tricky logistics and a challenging timetable to contend with to complete the Square for the official opening by Her Majesty the Queen in October last year, but we succeeded and it was a great occasion.