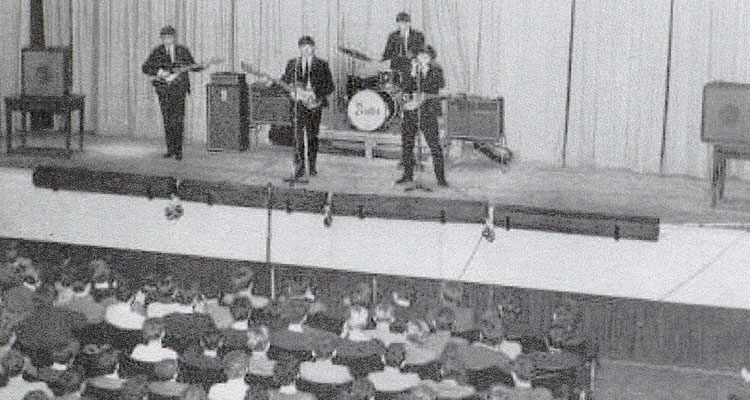 THE BEATLES AT STOWE

“Probably the most unusual concert appearance of all.” Mark Lewisohn, The Complete Beatles Chronicle

Chris Walker (Walpole 67) has written with fond memories of the Beatles Concert held at Stowe in 1964, he writes:

“I remember David Moores (Grenville 64) arranged the concert and paid the Beatles £100 for the performance. He charged Stoics 10 shillings (50p) each and sold 240 tickets, making a profit of £20. He spent the whole lot on a meal for the Beatles and his chums in the Tuck Shop.

The Beatles turned up quite late for the concert, so played a little extra time for us to compensate. And what a concert! They played their songs from their first LP Please Please Me. Everyone was hit by the huge volume (rare in 1964) from their array of VOX speakers and their audience certainly did not sit quietly, as they enjoyed this new phenomenon.

My era also produced a number of bands; I’ve drawn up the list below with help from my friends, Jess Miller (Cobham 67) and David Jones (Grenville 66).”

EP private recording of 4 cover tracks in a classroom in 1966, which were never released publicly.