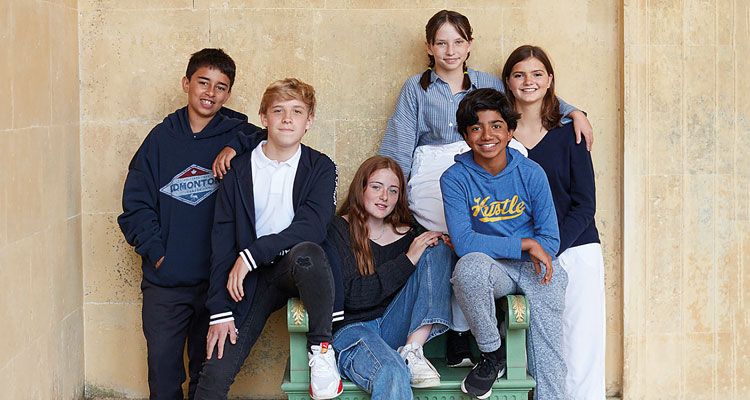 Elsewhere in this magazine, you will have read the Head’s reflections on an extraordinarily challenging year for us all at Stowe as pupils and staff have grappled with new procedures and protocols and have become conversant with the pleasures of Microsoft Teams and Zoom. It has been demanding of course, and frequently frustrating, but occasionally liberating too. Whereas we have had to cancel the great majority of Old Stoic events, with nearly twelve months having passed now without the opportunity physically to meet and reconnect with Old Stoics and their families in the UK and around the world, we have found new ways of making and sustaining contact. The virtual gathering, for example, of our American Friends of Stowe, the organisation that provides such valuable and vital support, along with friends in Canada and elsewhere in the Americas was a tremendous success.

Throughout 2020, our mission to raise funding for the vital work of both Stowe School Foundation and Stowe House Preservation Trust has continued unabated and at a time when the capacity of us all to make charitable donations has been under such pressure, I have been staggered by the generosity that you as Old Stoics, Parents and Friends of Stowe have shown to us: we are truly indebted and grateful to you. 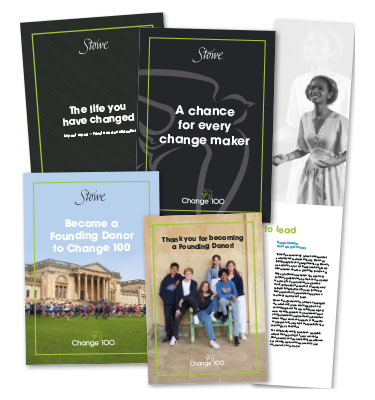 Of greatest significance has been the launch of Change 100, our transformative mission to provide funding and the opportunity of a Stowe education to talented and deserving children from much less-advantaged families. Twelve months ago, the Head argued in this magazine that “The success of independent schools is not based on class snobbery and privilege, but on their ability to move with the times, re-invent themselves and stay relevant. Change 100 is a vision for the next one hundred years of educational excellence which will provide life-changing opportunities for children who would otherwise not be able to attend this unique school, which prides itself on bringing out the best in each and every Stoic. To this end, as we look forward to celebrating Stowe’s upcoming centenary, the mission for Change 100 is to raise £100m as an endowment for bursaries, to support one hundred fully-funded boarding and day places at Stowe, every year, in perpetuity…”

Since launching the appeal in late November, we have been bowled over by the response, with donations of every size coming into the Development Office, quite often with heart-warming and very personal stories of what it means to give to such a cause. With the funding we had already secured for the Change 100 programme, we were delighted to welcome our first pupils in September as beneficiaries of the programme. The mother of one of them wrote to me, saying: “I am so ecstatic and grateful that my son has this chance – it is more than I could ever have wanted for him. The chance of coming to Stowe is going to give him the opportunity to change his life for the better, to achieve and to realise his ambitions. The theatre is his first passion, but he’s also thinking he might like to become a solicitor – who knows. I am bursting with gratitude to Stowe and to everyone who has made this possible. My son is an only child, and after the death of his father this couldn’t have come at a better time in his life. It’s going to inspire him to really be somebody…it’s just amazing.”

Our work extends now to finding many more children who will benefit as a direct result of your generosity: we are establishing partnerships with local, regional and national charities and other organisations who can guide us and put us in touch with potential beneficiaries.

We would be thrilled to hear from you if you would like to learn more about Change 100 and to become engaged in supporting it in some way: whilst our ultimate goal is certainly an ambitious one, it is the participation and contributions of members of our community at every level, large and more modest, that will enable us to achieve real and transformational change. Genuinely, no donation is too small.

The last twelve months have seen great progress too with the final stages of the remarkable restoration programme for Stowe House – and I am indebted to Chris Atkinson (Chatham 57, former teacher and Housemaster of Walpole, and of course former President of the Old Stoic Society) who ‘topped and tailed’ so many letters early last year asking for support for the work on the remaining State Rooms. The exciting news is that the Temple Room has almost been completed (with its re-gilded ceiling looking quite magnificent) and attention has now turned to the State Dining Room. It is a wonderful prospect that, come the School’s Centenary celebrations in 2023, we will be able to mark the completion of the project that began in 2001 and has been, we believe, the largest restoration project of its kind in the UK since the work on Windsor Castle. The finishing line is in sight!

I am very pleased to take this opportunity finally to thank all those who have supported the continuing development of the School’s educational facilities over the last 12 months. Most significantly, we look forward to work progressing on the creation of the new Design Technology and Engineering Centre, the opening of which will be one of the signature events of our Centenary year in 2023, and are indebted to all those whose generosity has helped to make it possible.

Our team in the Development Office has changed in the last year: I am delighted that Charlie Clare (Chatham 94) (cclare@stowe.co.uk) is now our Deputy Development Director and is responsible, amongst other things, for running our Roxburgh Society, for the 150+ Old Stoics who have so kindly decided to leave a bequest to Stowe in their Wills; Arron Quainton (aquainton@stowe.co.uk) runs all our communications from the office; Sarah Rodgers (srodgers@stowe.co.uk) looks after the database and keeps our records up to date; and we are delighted to have welcomed Beth Rufey (brufey@stowe.co.uk) in the last few weeks who will be providing support for all our activities. Please do feel free to get in touch with any of us at any time.

My final words are of thanks once again for all that you have done as a community to support Stowe in the last twelve months. I hope very much that you enjoy a good, healthy and prosperous 2021 and I look forward to being back in touch with more news as the year progresses.