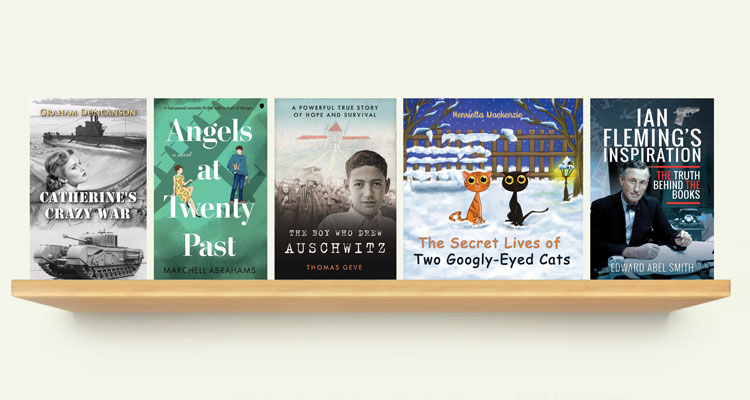 One of Britain’s spymasters, Bertie who is in his forties, has been lusting after Catherine since he caught her swimming in the nude when she was sixteen. Catherine is driven by the three P’s. She is patriotic, passionate and promiscuous. Bertie is happy to take her virginity on her request on her eighteenth birthday, the day when Britain declared war on Nazi Germany. She saves him from a certain assassination attempt. A bond is forged between them, which all the dark aspects of war does not break. The chances of either of them surviving the war are slight. The risks they are taking for their country are enormous and are requested at the highest level, not only in bomb-torn London, but also in many other theatres of the conflict.

Released on 28 November 2020, Angels at Twenty Past is written by Mrs Maria Carnegie (née Alexander, Stanhope 77), under the Pseudonym Marchell Abrahams, and has been described as “a fast-paced romantic thriller with a dash of danger.”

Even a burglary in which nothing seems to have been taken can have shattering consequences. Rich girl Cassie soon discovers this after her parents’ house is broken into and she finds herself being pursued by two very different men, for very different reasons. Privy to a secret she doesn’t know she possesses, the hunt is up from Surrey to Oxford, and from London to ancient Etruscan Italy, as she begins to realise that the deadly wartime conspiracy she has stumbled upon now directly concerns her – and her family.

Pretty soon she, Huw and Colin are themselves being hunted by the governments of two extremely powerful countries, who will stop at nothing, including murder, to get Cassie’s secret into their own hands. But although the three manage to evade capture over and over again the net is closing in…

The secrets of war-torn Berlin reach their long shadows down to the present day; and nothing will ever be quite the same again.

If you would like to order a copy of Angels at Twenty Past, please visit Troubador.

The Boy Who Drew Auschwitz by Thomas Geve

Old Stoic Charles Inglefield (Temple 95), had the privilege of meeting Thomas Geve in 2019. Together they co-authored his testimony.

“We felt an urge to document what we had witnessed. If we who had experienced it, I reasoned, did not reveal the bitter truth, people simply would not believe the extent of the Nazis’ evil. I wanted to share our life, the events and our struggle to survive.”

Thomas Geve was just 15 years old when he was liberated from Buchenwald concentration camp on 11 April 1945. It was the third concentration camp he had survived. Upon arrival at Auschwitz- Birkenau, Thomas was separated from his mother and left to fend for himself in the men’s camp of Auschwitz I, at the age of 13. During the 22 months he was imprisoned, he was subjected to, and forced to observe first-hand, the inhumane world of Nazi concentration camps.

On his eventual release Thomas felt compelled to capture daily life in the death camps in more than eighty profoundly moving drawings. Infamous scenarios synonymous with this dark period of history were portrayed in poignant but simple detail with extraordinary accuracy.

Despite the unspeakable events he experienced, Thomas decided to become an active witness and tell the truth about life in the camps. He has spoken to audiences from around the world and continues to raise awareness about the Holocaust.

The Boy Who Drew Auschwitz presents a rare living testimony through the eyes of a child who had the unique ability to observe and remember every detail around him and chose to document it all.

Available on Amazon, WHSmith and Waterstones

Henrietta Mackenzie (Nugent 95) published her first picture book in support of Great Ormond Street Hospital, in gratitude for her daughter’s diagnosis and treatment for a condition called ‘Segmental Haemangioma’. This is a potentially dangerous red swelling condition caused by an overgrowth of blood vessels on her face and around her airways.

Henrietta wrote her first children’s picture book The Secret Lives of Two Googly-Eyed Cats about Penny and her two toy cats who creep out at night in search of fun and adventure, ransacking bins, scrapping with other cats and generally causing mischief.

The book, published by Austin Macauley, is targeted at 3-5 year olds and aims to empower children to be more courageous and creative. It also helps teach them kindness.

Henrietta commented about her book: “Inspired by reading to my daughter, Penny, and creating stories about her two googly-eyed toy cats, I wrote this picture book to bring my stories to life. Also, due to Penny being medicated for the first two years of her life, I spent many a sleepless night up with her telling this story.”

The Secret Lives of Two Googly-Eyed Cats is available on Amazon.

Ian Fleming’s Inspiration: The Truth Behind the Books by Edward Abel Smith (Chatham 09)

Old Stoic, Edward Abel Smith’s (Chatham 09) book Ian Fleming’s Inspiration: The Truth Behind the Books was published by Pen & Sword on 30 May 2020.

James Bond is possibly the most well-known fictional character in history. What most people don’t know is that almost all of the characters, plots and gadgets come from the real-life experiences of Bond’s creator – Commander Ian Fleming.

In this book, we go through the plots of Fleming’s novels explaining the real-life experiences that inspired them. The reader is taken on a journey through Fleming’s direct involvement in World War II intelligence and how this translated through his typewriter into James Bond’s world, as well as the many other factors of Fleming’s life which were also taken as inspiration. Most notably, the friends who Fleming kept, among whom were Noël Coward and Randolph Churchill and the influential people he would mingle with, British Prime Ministers and American Presidents.

Bond is known for his exotic travel, most notably to the island of Jamaica, where Fleming spent much of his life. The desk in his Caribbean house, Goldeneye, was also where his life experiences would be put onto paper in the guise of James Bond. As the island was highly influential for Fleming, it features heavily in this book, offering an element of escapism to the reader, with tales of a clear blue sea, Caribbean climate and island socialising.

Ian Fleming might have died prematurely aged 53, but so much of him lives on to this day through the most famous spy in the world, James Bond.