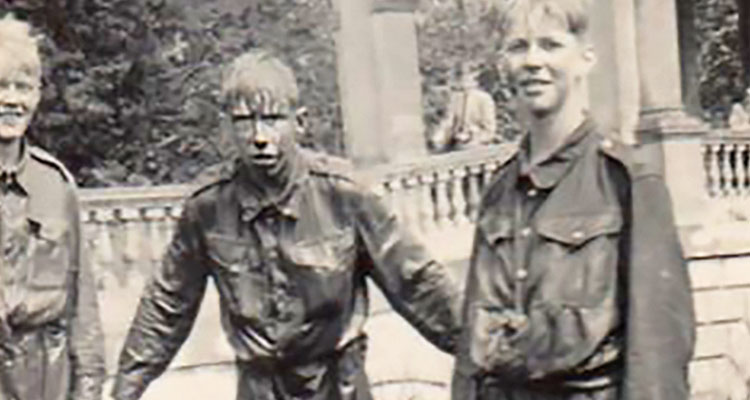 A Naughty Day at Stowe

It was Easter term at Stowe 1956 and there was snow on the ground and therefore no rugby. Somebody had been over to Silverstone and reported that there were hundreds of cars in the middle of the circuit with keys in the ignition and ready to drive.

The following Sunday, still snowbound, what should we do? Obviously, Silverstone called loud and clear! When I say ‘we’, I refer to a group of seven sixteen year old Stoics in Temple House, all great friends and never very far from mischief, when together.

We arrived at the circuit, and sure enough there they were, Hillmans, Humbers and the whole Rooters Group Range. One of our group jumped into the Hillman Husky and the rest of us piled into the back. After a couple of minutes we decided one car was boring, so the cry went up “Let’s have one each.” My father owned a Humber Hawk at the time so I went for a Humber Super Snipe, an absolute brute of a thing, as big as a tank, with no power steering and with the gear lever on the steering column.

We were all having a great time, skidding around in small circles in the snow when, suddenly, I noticed that my friends were abandoning their cars and running like mad. I thought, stupidly, those two men must be walking over to see what’s happening. So I parked my ‘borrowed’ car back where I found it, got out, to hear the sound of a car engine right behind me. I was fit, but with my welly boots and raincoat on, 200 yards back to the boundary bank of the circuit was too much to beat the guys in the car.

I was frog marched to a hut where I was immediately charged with being from Stowe. “Oh no”, I said, with immediate thoughts of expulsion, “I am staying with my uncle in Chackmore and I come from Essex”.

“Who were the other boys you were with?”

“No idea, I met them on the way to Silverstone. I think they were local boys from Buckingham.”

“Who is your uncle?”

“Evan Evans”, I said, which I think was a name of a bus company.

The police were then called, by which time I was getting seriously worried. I was asked to make a written statement so I stuck to my story. “Please sign your statement” – so I did – with the name of a boy who had been expelled from Stowe the year before. So far so good I thought. “Can I go now?”

“Yes, but we have to take you back to your uncle in Chackmore.”

“Oh dear, well could we possibly overlook that because my uncle has recently had a heart attack and the sight of me arriving with policemen might just cause a recurrence?”

Last chance, I thought, is to jump out of the police car but, no, I am shoved in the back with a police man either side, so no chance. Five minutes later, I have to come clean. “Ok, I admit I do come from Stowe.” They stop the car.

“Well, if we carry out the correct police procedure we should give you 48 hours in Buckingham Gaol for lying to the police.”

“So what are you going to do?”

“Who is your Housemaster?”

“The Reverend Windsor Richards”, I said, hoping that the Church might have some sway.

“Take us to him”, they demanded.

No sign of ‘Windy Dick’ in his study so we had to go, in a police car, to his house where he was entertaining new boys to tea!

“Sorry to trouble you Sir, but I am in a spot of bother with the police.” He came out and was absolutely brilliant when confronted by two enormous policemen and told why I was standing there looking like a quivering wreck.

“Now look here”, he said, “If those people insist on leaving cars there with petrol and keys, ready to drive away, then these things will happen. It has happened before and it will happen again. I will deal with these boys, now go away and I don’t want to hear any more about it from you.” To my amazement away they went. So far, so good, but Windy said to me, “I know who the other six are so make sure you are all in my study at 6pm this evening.”

I then had the hardest part of the whole day, telling my best friends at Stowe that I had landed them in the mire and that there was a strong possibility that we might all be expelled.

They were all incredibly supportive and said they would take whatever was forthcoming and would not blame me for it. On that note, I will name them. The two that I see most of today are Mark Gilbert (Temple 58) and Alastair
Hodges-Nugent (Temple 58) and I certainly list them as two of my very best friends to this day. Jonathan Avory (Temple 59), son of one of Stowe’s first 99, as was Mark Gilbert. Jonathan was a great tennis player and his father, Ted, played in the Davis Cup for England whilst still at Stowe. Jonathan sadly died very young. Richard Sherjan (Temple 58), an all round sportsman who got his school colours for all three major sports, Alan Honey (Temple 59), another excellent sportsman, who sadly passed away in 2000, and Richard Birt-Llewellin (Temple 59), whom I saw at a Stowe Reunion some years ago but sadly, he too has since died.

So, there we all were, in Windy’s study at 6pm, not really knowing what to expect but anticipating the worst. It did get worse, because Windy said he would have to refer it to the Headmaster. He would do his best for us but could not guarantee anything. I remember having a terrible feeling of apprehension and regret because I felt I was going to leave Stowe, but more importantly, I would going to be the cause of six other boys being sacked too.

All seven of us had to present ourselves in the Headmaster, Eric Reynolds’ study at 7pm on the same Sunday night.

“Your Housemaster has reported to me in full exactly what has occurred today and you are all a disgrace to the School.” This is it, I thought, we’re on the next train home. “I am going to beat you all and you are gated for the rest of term.”

What a relief! It was the first and only time I was pleased to receive a beating.

Somehow, the Story made the news in The Daily Mirror the following day!

When Windy said to the Police that a similar thing had happened before, he was right. It was in the early days of Stowe when JF Roxburgh was Headmaster. Two Stoics were doing exactly as we had when they realised that they were in danger of being late for roll call, so instead of parking their cars and walking back, they each drove back to Stowe, attended roll call and then decided to race their cars back to Silverstone on the public road.

The front runner took a corner too fast, spun the car causing his friend to plough into the back of him. Nobody was hurt but both cars were a write off. Needless to say, JF was none too pleased when he heard. He called the boys into his study and told them he had no choice but to expel them, which he did in front of the entire School at assembly the following morning. After which, JF put the two boys and their luggage in a taxi and accompanied them to Buckingham Railway Station. He stood on the platform with them, expressing his great regret at having to expel the first boys, ever, from Stowe.

The train duly arrived, JF opened the carriage door and held out his hand as if to say goodbye. He then closed the door before the boys entered the carriage saying, “Well, I think you have both learned your lesson. You may now return to Stowe to resume your education but never do anything like that again.”

I was never fortunate enough to meet the great man, but I think this is a good example of JF’s marvellous stewardship of the post of Headmaster of Stowe.