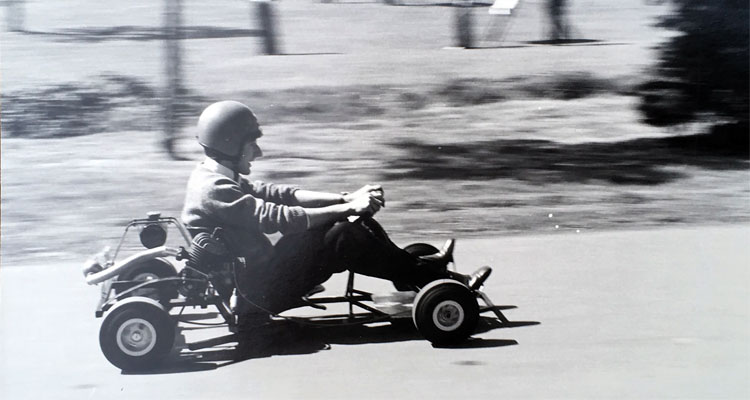 George in the driving seat

From Africa to Admiral (via Stowe)

There are, and have been, many Old Stoics who have made their careers in the UK Armed Forces, but very few have reached the peak of their profession. One such is George Zambellas (Walpole 76). This article by his former Housemaster, Michael Kirk, recognises his achievement.

George and his younger brother Alex arrived at Walpole on the first day of term in September 1972. Their father was the District Medical Officer in Shabani, Southern Rhodesia (now Zimbabwe), so their Primary School was local and traditional. They spent a short spell boarding at Peterhouse and Springvale but, as Rhodesia descended into chaos, they were despatched overseas. Having travelled alone to London (Harrods for the uniform and trunk) and Stowe, you can imagine how strange the new environment must have seemed. They soon became used to Stowe’s ways, and it was clear that while Alex was more inclined towards the Arts, George was more interested in Science and Technology.

Some years later, when George’s sons were at Hazelgrove, his wife Amanda was approached in the school car park by another parent who said: “Mrs Zambellas, I’m Roger Potter and I taught your husband English at Stowe. He was, without doubt, one of the most talented students I ever had, and I kept his English essays, they were so good.” George’s wife replied: “You’re very kind, that wasn’t George, who got a C. That was his brother.” Another weird coincidence was that Colin Juneman who had taught George mathematics (Colin was hugely respected as a great maths teacher) and then found himself teaching another generation of Zambelli at King’s Bruton.

In the 1970s, I am sure that Old Stoics will remember the craze for improving and embellishing their studies which, particularly in Walpole, were rather bleak places, with high windows and ceilings but not much floor space. One of the devices used by the occupants was the handing of ‘drapes’ to separate the usable spaces, which made it look like the interior of houses of ill repute and were frowned upon by the authorities! George approached this problem by scorning drapes and constructing an elaborate wooden structure to divide his tall room into three levels, thus more than doubling the usable space – a civilised, practical and ingenious solution. He also made his mark as technical expert for house plays.

George spent much time in the wood and metal workshops where former staff, Maurice Acton and Peter James encouraged his design and engineering talents. His most famous project was a superb Class 1 racing go-cart, which his Housemaster was allowed to drive around the Walpole circuit!

George left Stowe in 1976 and, with his skills and talents, entered the engineering profession. He made a start on this as an industrial apprentice with Hawker Siddeley Aviation, now BAE, and at Southampton University, taking a degree in aeronautical and astronautical engineering in 1980.

Whilst at Hawker Siddeley, he was working on the Sea Harrier development simulator, when a bunch of Navy pilots arrived to fly the same equipment. He later recounted that it took him minutes to decide to switch career, much to the company’s dismay. Indeed, after he left, another four apprentices did the same. All this military interest was something of a surprise, since George was never a member of the CCF, although he must have had an interest in water as he was Captain of sculling!

He was commissioned as an acting Sub-Lieutenant in 1980, and became full Lieutenant in 1982, serving as a helicopter pilot in three Naval Air Squadrons. After naval staff training at Greenwich in 1990, he became a Corporate Planner, and then took command of the minesweeper HMS Cattistock; next ashore as an Aviation Operations Officer at Fleet Headquarters in Northwood, and then promotion to Commander. In 1995 he took over as the Frigate HMS Argyll was deployed on the counter-narcotics operations in the Caribbean.

He went back to corporate planning during the 1997-8 Strategic Defence Review, and returned to operational command as Captain of the Frigate HMS Chatham which was deployed as part of Operation Palliser off Sierra Leone.

He received the Distinguished Service Cross in 2001.

Succeeding appointments included Deputy Flag Officer (Sea Training) and staff courses at Shrivenham and, in 2002 he was promoted to Commodore and became Principal Staff Officer to the Chief of Defence Staff during the invasion of Iraq and the early days of its aftermath.

After command of the Royal Navy’s Amphibious Task Group in 2005, George was promoted to Rear Admiral and as Chief of Staff (Transformation) was entrusted with designing and delivering the Navy’s new approach to the generation of maritime capability and support to operations. In 2008 he became Chief of Staff (Operations) at the UK’s permanent joint Headquarters at Northwood, supporting operations in Iraq and Afghanistan.

His final promotion was in April 2013, when he became First Sea Lord and Chief of Naval Staff – the ‘top of the tree’. He retired in 2016 as Admiral Sir George Zambellas GCB DSC DL, and his successor said, “We owe Sir George a huge debt of gratitude; through his vision and leadership the Royal Navy’s credibility has been strengthened immeasurably and, with it, our self-belief. It is a legacy that will withstand the test of time.”

I am sure that, in retirement, George should be tinkering with things mechanical and designing who knows what – perhaps a multi-storey flat or a go-cart that drives itself! In reality, I hear he has no intention of retiring and has thrown himself back into leadership and technology – in cyber, artificial intelligence and quantum mechanics, with connections from California to India.

In any event, his successes at Stowe and in the service of his country are real achievements for (as he indeed calls himself) “a boy from the bush!”