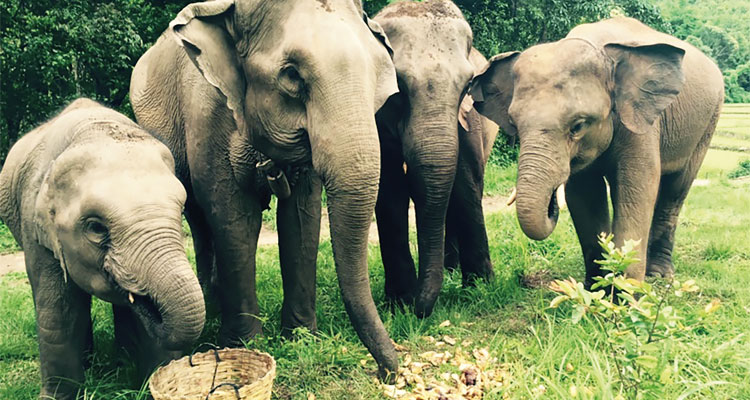 Some of the elephants Laura met

I decided in early 2015 that I wanted to do something extraordinary. I loved living in London for five years but a trip was on the horizon, although not just any trip.

It needed to be fun-filled, adventurous, community driven and completely out of my comfort zone. I love the Asian culture so I thought what better way than to swap the life of the urban jungle for the real jungles of South East Asia.

I was originally headed for Nepal in mid-May 2015 but, sadly, due to Mother Nature’s cruel twist of fate she had other things in store when a devastating major earthquake hit much of the country in late April. I was lucky to miss this disaster as many people died. The news hit the world on a global scale. At that stage, I was still very intent on going, but for safety and insurance reasons I had to alter my trip to another location so I chose to go to Thailand.

I had already been to Thailand a few years before so I knew I loved it already. I felt I’d done all the island hopping and beach partying of the South and the place I really I wanted to visit, beckoned from the North. Elephant Country.

I guess when I’d heard about this experience in a magazine in the UK, I’d no idea of the circumstances which brought the elephants here. I guess you could have called me ignorant. The sense of wanting to help these elephants was definitely high on my agenda but, admittedly, I probably felt an enormous urge to see these magnificent creatures that I’ve heard such wonderful things about and seen only on David Attenborough’s beautifully narrated documentaries.

The ENP (Elephant Nature Park) where I travelled to is about 60km north of Chiang Mai. The sanctuary is a haven for the rehabilitation of abused and rescued elephants where you can volunteer and visit to help the running of the park. It’s a natural environment for elephants, dogs, cats, buffaloes and many other animals.

Upon arriving at the park, you don’t have to be an animal lover to feel that buzzing excitement at your first sight of these incredible mammals. You’ll obviously spot elephants trekking with humans ‘riding’ on their backs along the journey to the park as trekking is a massive part of the tourist trade. However, when you see an elephant just being an elephant in a natural environment not covered in pantomime clothes, chained up or being whipped or beaten, there is a real sense of freedom not just for the elephant but for anyone watching.

I spent some time here doing a multitude of things to help the park and local communities. On the list of activities were, washing and loading endless supplies of fruit (literally tons), feeding the elephants, developing local children’s learning experiences and teaching them English, learning about the local agriculture and community, cutting corn in fields outside the park (another foody favourite of our humongous friends), picking banana plants, scooping up elephant poo, walking dogs who roam around all over the sanctuary, meeting and living with tribal families and, my absolute favourite, bathing the elephants in the river. It’s certainly not for the faint hearted. As you can imagine, the temperature was often pushing 40 degrees and it was always extremely humid but it was certainly a memorable experience and a life highlight. When you come to the park and understand the plight of the Asian elephants it makes it a million times worth it.

During the time we spent there, we were shown a video documentary by Lek the inspirational founder of the park about the plight of elephants in Thailand and neighbouring countries. It was one of the most traumatic things I’ve ever seen regarding the horror and maltreatment of animals. It was one of those times that you are too shocked to move or even leave the room. I don’t think I can ever forget, as an elephant wouldn’t, some of the images and videos I witnessed.

One story that has really stayed with me since first hearing about it, was the tale of the beautiful Djokia. She now lives at the ENP but her story is a very sad one and, as they say, an elephant never forgets. More than 25 years ago she was working as a logging elephant, pulling enormous sized logs whilst helping the business of felling trees and cutting and preparing timber. At some point, Djokia fell pregnant but due to the physical and mentally demanding strain of logging and the constant use of bull hooks, chains and human violence, she unfortunately miscarried. An elephant can be very similar to humans particularly with their expressions and emotions. She was devastated and due to the emotional stress on her, this limited the amount of physical work she was capable of but sadly her owner had other intentions. He vigorously pushed her to perform until one day after constant beatings and punishing hill climbs and she couldn’t carry on and gave him a kick. Now, I’ve never been kicked by an elephant but I have by a horse. If you can imagine that pain perhaps you can measure the pain of being kicked by an elephant. The problem is in his retaliation, the owner may have ruined his own way of life as well as Djokia’s when he removed a knife from his pocket and blinded her in both eyes.

These magnificent animals may look huge but they are extremely sensitive both physically and mentally like any animal or human they cannot handle extreme physical and mental abuse. Perhaps you remember Tyke the circus elephant in Hawaii in 1994?

At least Djokia’s story does have a happy ending and this is largely as a result of the ENP and the hundreds of volunteers that make it possible as well as an elephant’s natural family oriented way of life. When she arrived at the park, there was a worry that because of her blindness she would remain alone and depressed because she might not follow a herd and join a family. Amazingly, another elephant called Maypalm immediately took to Djokia and they now follow each other everywhere. They have been sisters ever since.

Thankfully, the harvesting of timber is now illegal in Thailand since 1989. However, there still aren’t any animal welfare laws in place so these elephants rely purely on the kindness and love of human beings either to care for them or leave them alone to be wild.

I think the trip opened my eyes to another world which I hadn’t really seen before. Sometimes, it’s only the harshest methods of seeing things that we don’t want to, that really wakes us up to the truth and to take action. Lek told us the best thing we can do now is to use social media to spread awareness and share what we’ve learnt. If you read this and want to know more please have a look at the ENP website: www.elephantnaturepark.org

You don’t have to be on your gap year or an animal welfare activist to take an interest. In fact, I encourage more of the over thirties to do this with their families. Many people return year on year in all shapes and sizes but even more people use social media to help save the elephant. I know I will definitely return.

There is a long way to go for the elephants of the world, let alone those in Asia but it was an eye-opening experience to see these sacred animals, often depicted as revered symbols of power and fortune, diminished to a worrying size but, with the hope of places like the ENP, there is promise and encouragement as an elephant’s basic emotion is to love, care and protect, so surely it can be ours too.

And, as an elephant never forgets, nor must we.