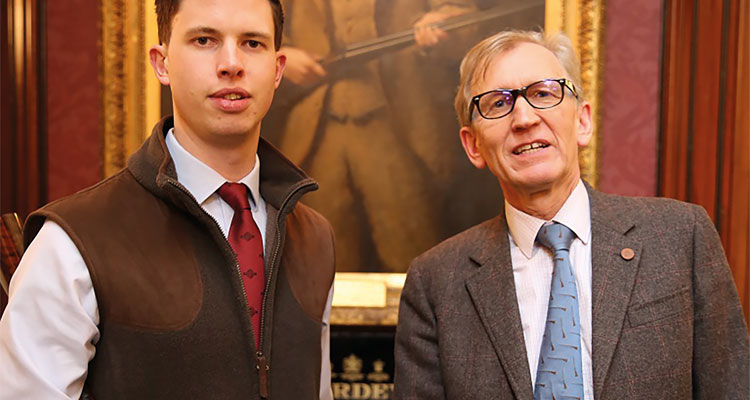 It is nice to find something that is a passion among Old Stoics and their families and I feel humbled to be given the opportunity to write about it, not least because English teachers will be reading my text. I joined Purdey in December last year and have met more Old Stoics through this than any other role I have had, since I left Stowe in 1974.

For those of you who may not know, James Purdey & Sons Ltd has been making fine shotguns and rifles in London since 1814 and is one of the very few companies that still does.

Purdey achieved deserved fame for the excellence of its products and, as a result, has three Royal Warrants and has supplied every English monarch since Queen Victoria. Charles Darwin took Purdey guns on his famous voyage on HMS Beagle. Bing Crosby had the opening bars of White Christmas engraved on his.

Monday Extra Clay Pigeon Shooting under the supervision of Arthur Pedder was one of the more tempting options available when I arrived at Stowe in 1969. They were very welcoming but, as I did not own a gun myself, I could only watch. My next stop was the .22 rifle range followed by an extended stay in the CCF to shoot .303s and a Bren Gun.

A few days in to the new role and a letter from Anna Semler on behalf of the OSS arrived on my desk and all those memories came flooding back. It also prompted me to ask if any Old Stoics had a Purdey story in their family.

I also have included contributions from my colleagues Edward Benson (Temple 08) and D’Arcy Wyvill (Temple 93) who between them I am sure have forgotten more about guns than I will ever learn. Ed also works for Purdey and D’Arcy runs a wonderful shoot at Constable Burton in the Yorkshire Dales.

I should have expected the number of personal family stories I received, as I know a Purdey is a very special thing, but it still took me by surprise. I am very grateful to have made contact with nearly 20 Old Stoics since the call went out.

I have heard some amazing tales of Purdeys passed down the generations and plans to pass them on to generations to come. Not everyone wanted to see their names in print so here is a flavour of the stories I have found.

There were a few tales of derring-do which included one war hero who spent three nights in a tree in order to shoot a man-eating tiger which was terrorising a small village. The great uncle of another Old Stoic was not so lucky and shot off his own leg when attacked by an injured tiger.

Many who responded had inherited their Purdeys which were often gifted to previous generations for weddings or 21st birthdays. Most often, these are from close relatives, one pair was given by the Hoover company in recognition of business achievements. It is clear that all the owners felt a connection to the previous generation of owners and had plans to pass them on to the next.

Ed Benson’s story is a great example of this:

“My grandfather had a pair of best 12-bore side-by-sides with 29” barrels built for him in 1936, shortly after he joined the British Army. He went on to fight in the Second World War, notably during the Africa and Normandy campaigns in 1942 and 1944 respectively, eventually crossing the Rhine into Germany in 1945; his pair of Purdeys sitting in the gun cabinet, awaiting use back at home. He was a keen and successful shot who, throughout the many seasons, would consistently use his Purdeys. Unusually tall for his generation and known as the ‘second tallest man in the British Army’, he stood at 6’8” with stocks measuring 16 ¼”, very big guns indeed. Technically, his shooting career spanned an enormous 54 years, (1936-1990) with this pair, shooting every quarry imaginable, from flighting wild majestic teal off huge, marbled lakes that would circle higher with every shot, in India. English partridges grazing hedgerows before dispersing like a gun shot over the guns in Norfolk. Driven grouse on the midge bitten moors of Scotland and the wet landscape of Northumberland. Pheasant, partridge, woodcock, duck, snipe, hare and everything in between, filled his numerous game books. A particularly notable day was when he shot 28 high pheasants for 29 shots in one drive. Truly, a mouth watering golden era for shooting.

After he gave up in 1990, the pair were passed to my father who has used them consistently and busily ever since, alternating between Numbers 1 and 2, although his favourite is his Number 1.”

The passion for shooting and the love of the guns came across strongly in many of the stories with one Old Stoic admitting: “if the house was burning down they would be high up my list to get out to safety!” and another who had invested his retirement fund in commissioning a pair of hammer guns and a share in an excellent Island malt distillery.

D’Arcy Wyvill’s shooting passion was developed at Stowe. He writes:

“Despite coming from a shooting family, my interest in shooting was definitely channelled and nurtured at Stowe where I was captain of .22 shooting while being a member of the Skill at Arms section of the CCF. I also represented the School in the first clay pigeon team under Terry Fricker who was the coach then. We had a lot of fun up at the old Bourbon tower both shooting and trapping and the high bird used to come off the top tower, back in the day before health and safety would have banned any child going up there at all. We represented the School in the Public Schools Clay Pigeon Competition which were run then at Lord Lichfield’s estate, Shugborough. I recently bumped into Mr Fricker at the last Game Fair and it was great to have a catch up and swap a few yarns. He is still actively involved in the shooting world.”

I also heard from Nigel who called in to Purdey in 1992 and tried very hard to buy a Purdey without success.

I was also sent a tale which perfectly illustrates the shooting sense of humour and reminds us all that having the best gun does not necessarily make you the best shot.

“An American who was renowned as having one of the best collection of fine English guns, with a particular preference for Purdeys, shot regularly at a well known grouse shoot in Yorkshire. Unfortunately, he was short sighted which meant he found the fast grouse hard work. His host decided to let his Head Keeper load for him. At the end of the three days he called over his Head Keeper and asked, “How did you get on with your American Gun?”

He replied, “A very charming gentleman, My Lord”. The host replied “Did you know that he owns over 60 Purdeys?” The loader replied, “That may be the case My Lord but if he let all the buggers off at once, I would still have my money on the grouse!”

Finally, I would like to extend the offer of a complimentary copy of the Purdey Bicentenary Book, Two Hundred Years of Excellence, to any Old Stoic who makes a purchase from our Mayfair store in South Audley Street before the end of April 2017.