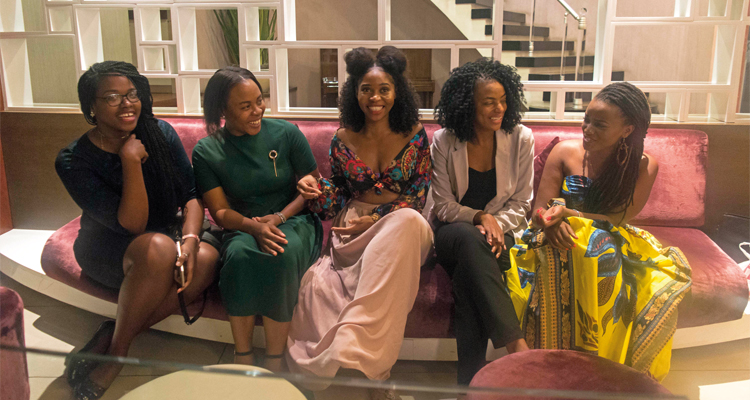 The African abroad – a duality of western milieu rested on a pan Africanist backbone. With the dyad also comes a distinct perspective on Africa. Being somewhat representative of the Western and African interconnection, the African diaspora is uniquely positioned to catalyse economic growth in Africa.

I first embodied this interconnection as an African abroad after being chosen to take part in the Stowe Scholarship programme in 2008, (then known as the Branson Scholarship Programme). As one of the first beneficiaries, the ‘inaugural pressures’ were well anticipated. I knew that I had an ‘undeclared’ responsibility to share my experiences as best I could back in South Africa. The progressive exposure I became accustomed to at Stowe also challenged me to be open minded in effecting change without adhering to the narrow, ‘African girl goes to Europe’ narrative. Being given another opportunity to extend my footprint as an African abroad living in Cyprus (as a recipient of another merit based scholarship through Avidity Group Foundation, South Africa) I realised that the young African diaspora – an immensely progressive demographic, was also an unintentionally neglected demographic in terms of exposure to mentorship, career guidance and the acquisition of employable skills.

The core of my work while in Cyprus has, as a result, been centered around skills development of the young African diaspora. It is here that I became well acquainted with the skills discord and lack of integration of African graduates in the employment market abroad. There seemed to be a concerning fixation among African students on attaining an overseas degree: giving more than due credit to the Eurocentric differentiation a ‘worldly’ qualification had to offer; consequently paying little attention to the capitalisation of market needs – a perspective not particularly sustainable if skills development was bankrupt.

As a result, I founded an organisation called the African Abroad Network, a non-profit organisation that recognises young Africans as forerunners of global citizenship and helps facilitate their economic mobility through skills development, mentorship and professional socialisation. Within the organisation, we recently introduced an annual skills development programme called ‘Woke&Disruptive’ for international students. Woke&Disruptive is an intense, 6 month programme, aimed at increasing the entrepreneurial capacity of international students through e-learning and mentorship. Chosen participants complete three key pillars of the programme namely: ‘Teach Me’ (take up online courses), ‘Mentor Me’ (weekly online mentoring with established entrepreneurs) and ‘Employ Me’ (short internship placement). Upon completion (and university graduation), participants are absorbed into graduate programmes with partnered corporates in their home countries.

The long-term projection of the African Abroad Network is to become a fully-fledged incubator to African youth-led start ups that create employment and spur economic growth. With the involvement of proactive stakeholders and donors, our e-learning and online mentorship facilities can help leverage the skills and resources that budding global Africans possess; translating into competitive human capital, job creation and overall economic growth. Our starting point at The African Abroad Network is, has, and will always be at the crossroads of being globally ‘woke’ and entrepreneurially ‘disruptive’!