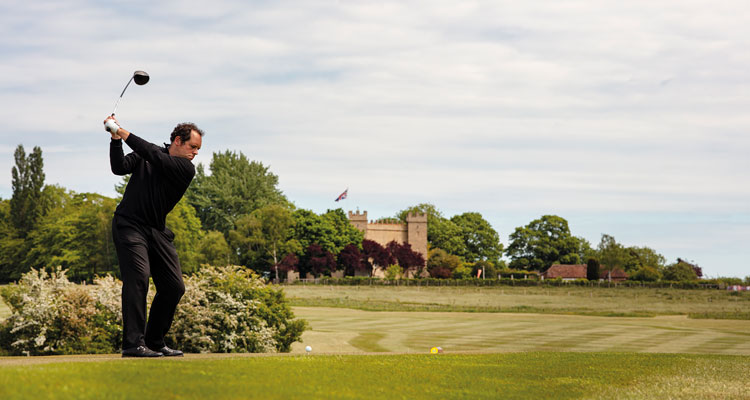 Stowe is synonymous with the game of golf and it is remarkable to think that golf has been played within the grounds of Stowe since the 1920s and formed such an important part of the overall Stowe experience. Stoics have been able to play and develop their golfing skills during their time at Stowe and gain much pleasure and enjoyment in the process. Following the appointment of Andrew Hancox as our PGA Golf Professional and Director of Golf, golf at Stowe has undergone a transformation and now enjoys a significantly higher profile at all age levels across the School.

There really are exciting times ahead as we now prepare to launch the Stowe Golf Academy and continue to welcome the arrival of our talented Golf Scholars.

Stowe’s superb new golf course was formally opened on Sunday 17 May 2020 under strict Covid-19 protocols. Jonathan Tucker, STRI’s golf course architect, has designed the course with consultancy advice from Andrew Hancox. This is the third golf course to have existed at Stowe (the first was created when the School opened in 1923) and replaces the course designed by Charles Kenneth Cotton, a renowned golf course architect, which opened in 1964. Working closely with the National Trust, the opportunity arose for the School to relocate the golf course to a larger, more open landscape, which would provide more challenges, reflecting developments in the modern game with technological advances in club shafts, club heads and golf balls. The move has also enabled the National Trust to reinstate the Western Garden to its former condition as Home Park (best illustrated in the series of drawings of Stowe by John Claude Nattes in 1805).

The location of our new golf course is on a very special site indeed – the rolling landscape provides superb natural features for golf and the land lies adjacent to the earthwork remains of Lamport Village. The site is also positioned amongst a range of other historic features including Lord Cobham and Gibbs’s Bourbon Tower (c.1740) and Bridgeman’s 1720s Bycell Riding, which lies to the south of the site, adjacent to Gibbs’s Stowe Castle (c.1740). Measuring just over 6,400 yards when played as an 18-hole course, the new nine-hole layout commences in a south easterly direction with stunning views of the Gothic Temple. Indeed, the delightful opening hole requires a tee shot to be played away from the Bourbon Tower in the direction of the distant Stowe Castle, thus providing a good indication of the overall scale of the layout. Without question, the signature hole on the course is the third hole – a tricky dogleg of 400 yards that requires a tee shot to be played over the historic quarry in order to allow for an approach to the very well protected green that is located beyond Russell’s pond and adjacent to the historic Fary’s Oak tree – the oldest surviving tree on Stowe’s grounds.

STRI Group have worked in close collaboration with Stowe to create and develop the golf course layout and undertake the necessary ecological and environmental surveys as part of the rigorous planning process. The design process was extensive and intricate, with STRI’s golf course architect, Jonathan Tucker, creating a course that avoided areas of historic value and the many ecological and environmental sensitivities on the site. The course development has provided the opportunity to recreate historic features on the site, including a c.650m deer fence, positioned in a manner that matches historic records, and several bespoke tree plantations.

The course provides a superb challenge for golfers of all abilities, with significantly longer and more challenging holes and greens constructed in accordance with USGA green profiling guidelines, thus ensuring long term sustainability. Joining Andrew Hancox for the opening of the course were Tom Youds (Chandos 20), last year’s Captain of Golf, who struck the opening drive, Craig Sutton, Stowe’s Director of Sport, Peter Simmons (Cobham 69), Secretary of the Old Stoic Golf Society, Lorne Williamson (Temple 56), past President of the Old Stoic Golf Society, Hannah Durden (Nugent 01), Chair of the Old Stoic Society, Chris Atkinson (Chatham 59), Former President of the Old Stoic Society, Marcus Atkinson (Chatham 90), Old Stoic and current parent and Colin Dudgeon, Stowe’s Director of Development. Their reaction was universally positive and there is great excitement that the new golf course and the Stowe Golf Academy will deliver another golden era of golf at Stowe.

Andrew Hancox commented: “With significantly longer and more challenging holes, along with green profiling constructed in accordance with USGA guidelines, I genuinely believe that over time our new golf course will present itself as one of the finest school golf facilities in the country and beyond.”

Peter Simmons commented: “The course was in great condition for the opening, has some fantastic views and is a real challenge with the third a real signature hole. At over 3,200 yards off the whites, full size USGA greens and two sets of tees it is a big step up on the old course. Together with a short game practice area and the planned Swing Studio in the new Clubhouse, Stoics will have a much better opportunity to develop their golf while the Stowe Golf Club can become a proper community club for players of all ages and standards.”

Shortly after I arrived at Stowe in 1957 Andrew Vinen became the MiC Golf and also became Under Housemaster in Cobham, so I got to know him quite well. I arrived back at Stowe for my last year in September 1960 to find the grass on the greens rather long and a few weeks later it was almost impossible to putt on them. I had a word with Mr Vinen, who explained that unfortunately the grounds staff were very reduced since several of them had failed to turn up for the new term. I remarked that it wouldn’t be very difficult to cut the greens since they only used a hand mower and I could easily do it. He soon found me the key for the shed and for the next three terms I had great fun in establishing new pin positions and changing the course a bit. At the end of the year, and a rather unremarkable sojourn at Stowe, I got a rare mention in The Stoic magazine to the effect that ‘Thanks to the ministration of Vowles, the course has been in very good condition this year’.

A few years later, I got into the habit of returning on Old Stoic Day and playing in the golf match. It made for a rather nice excuse to impress a new girlfriend and on our drive up from the Cotswolds, I outlined the format, whereby I didn’t think the standard of the boy’s golf would be that high and that the match should be easily over by lunchtime. I arrived on the first tee to find the ever-familiar figure of Andrew Vinen rocking up and down on his toes. “Ah, Vowles, good to see you again. Would you care to lead off for the Old Stoics?” This turned out to be the one and only occasion in my life that I led off for an Old Stoic golf team. My game was certainly well over before lunch, but not the way I had forecast it!