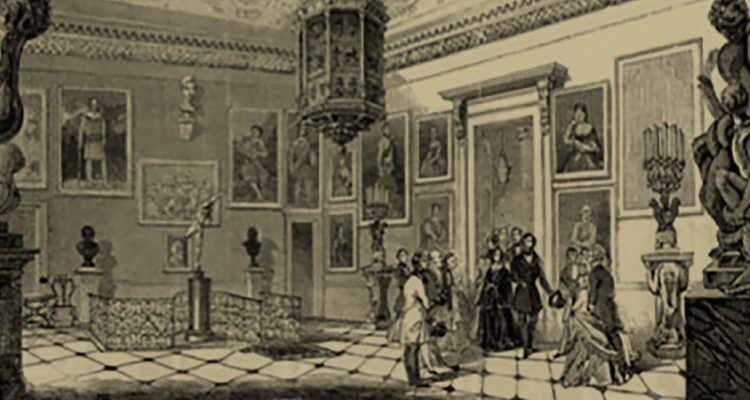 The Illustrated London News image of Queen Victoria and Prince Albert leaving Stowe on 18 January 1845. The Laocoön bronze statue is on the right of the engraving

Every year I write of the restoration projects that Stowe House Preservation Trust is undertaking. Since we started the restoration programme in 2000, I am pleased to say that we are now on the homeward stretch. This begins with statues on the South Front portico looking to return by this summer, and continues with a two year rolling programme of restoring three State Rooms – the North Hall, Temple Room and Dining Room.

In 2014/15, William Kent’s beautiful ceiling in the North Hall was restored by Bush and Berry and, considering its date (1733) its quality and condition were remarkable. For me, I’d never before noticed so many snakes masquerading as plant tendrils! Looking at the floor and the walls, we were originally aiming to restore the room to round about 1820 after the staircase was put in during the creation of the Egyptian Hall below North Hall (1803) and after the fireplace was removed (around 1815 and, rather strangely, never replaced). However, the discovery last year of one of the original statues that adorned North Hall, The Laocoön, that we are able to copy, moved us towards a date of about 1830. The Laocoön had been bought from the sale of William Backford’s Fonthill, a house built so large that it eventually collapsed in on itself. The statue was then subsequently sold in the great Stowe sale of 1848 – the sales catalogue lists it as a much sought- after piece (an early 19th century copy of a Roman antiquity).

The challenge was to find the wall and floor decoration that fitted in with this date – the current terrazzo floor dates from the 1960s or so. A stone floor will be laid next summer with a bronze copy of the Laocoön coming in early 2019. Then, over the summer of 2019, we hope to start the restoration of the Temple (State Drawing) Room and the State Dining Room, for which we are currently fundraising. These two rooms will have the floors, ceilings and walls repaired and restored and we are currently looking at the feasibility of having copies of the original chimney pieces made – the original Temple Room chimney piece is in the Santander Bank in Spain and the Dining Room chimney pieces are in a private house in Hampshire. I will keep you updated once the projects begin.

We recently sent out an appeal for these projects and we are delighted with all the support and generosity of so many of you, but we are still some way off our target for completion. Please consider helping us in this next vital chapter of Stowe’s development.