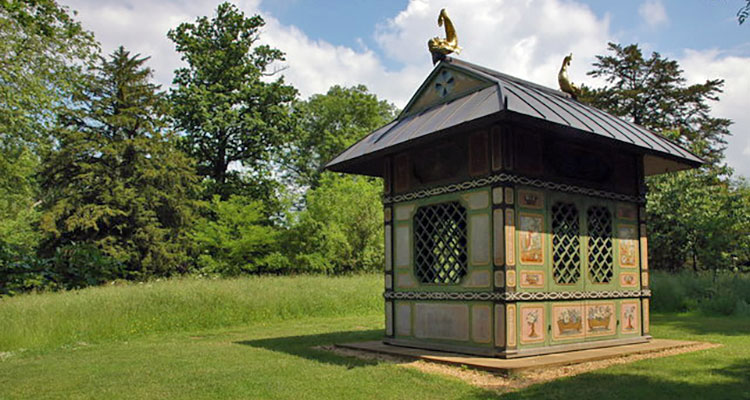 If you went to Stowe, which presumably you did, then you will be well acquainted with its abundance of politically charged classical temples and follies; sometimes standing bold, sometimes nestled within the perfectly crafted scenery. The epitome of the English Landscape Garden.

To be honest you probably even took it all for granted – didn’t we all? The beauty; the revolutionary garden design; the pinnacle of architectural and landscape achievement concocted by the greatest designers and patrons of their generation. It’s hard to care when that rustle in the bushes could be the Beadle coming to bust you for smoking.

But even if you did manage to appreciate it all while legging it through the Elysian Fields, you still may not be so familiar with the Chinese House – the slightly sorry-for-itself Chinese-styled temple hiding away by the pheasantry in a far corner of the gardens. Indeed, if you left before 1992, it wasn’t even here – it was still with its adopted home in Ireland, where it was first moved in c.1750.

The Chinese House once stood proud – if slightly discordant – amongst the classical temples and follies of the Elysian Fields.  From the first visitors in the 18th Century to contemporary art historians, the Chinese House has always been viewed as a Chinoiserie muse; a place to contemplate the exotic mysteries of the Far East. The first Chinese building in the UK, it is pretty, charming, intriguing, but nothing more.

But why then, was it placed in the one area of the garden which is laced with political allusion, when its aesthetics are so conspicuously contrasting? Everywhere you turn in the Elysian Fields, Viscount Cobham presents you with another jab at his nemesis: Prime Minister, Sir Robert Walpole. In fact, the very essence of the English Landscape Garden can be seen as a reaction against the rigid design of Versailles and with it the autocratic French government and an endorsement instead of liberty. The Chinese House just seems… odd.

But, surprising as it may – or may not – seem now, within the mind of the early 18th Century Englishman, China held an almost legendary status. Perpetuated by sinophile Jesuit missionaries from the 1660s onwards, China became a model for superior government and consummate morality, as personified by Confucius. Come the 1730s, the British press, Daily Mail style, started to take advantage of the “European Hallucination” of China to slate Walpole through Chinese images and stories, employed to contrast against the Prime Minister’s disagreeable politics.

Cobham died in 1749 and his heir, the 2nd Earl Temple, neither shared his beef with Walpole nor his taste in the exotic. He removed the most aberrational aspect of Kent’s busy garden and welcomed in the naturalised gardens of Capability Brown.

The Chinese House, banished for nearly 250 years, was therefore more than just a pretty muse. It contributed to the existing political landscape of the gardens in two ways, both of which have been missed. To the broader discourse of the gardens, where the English Landscape Garden was emerging as an endorsement of liberty, it introduced contrived Orientalist theory; dictating contemporary opinion on China as a bastion of good government. And within the Elysian Fields, where overt anti-Walpole satire was conspicuously disguised amongst classical architecture, the Chinese House is evidence of Cobham taking advantage of a flood of publications in the 1730s which used Chinese imagery to criticise Walpole.