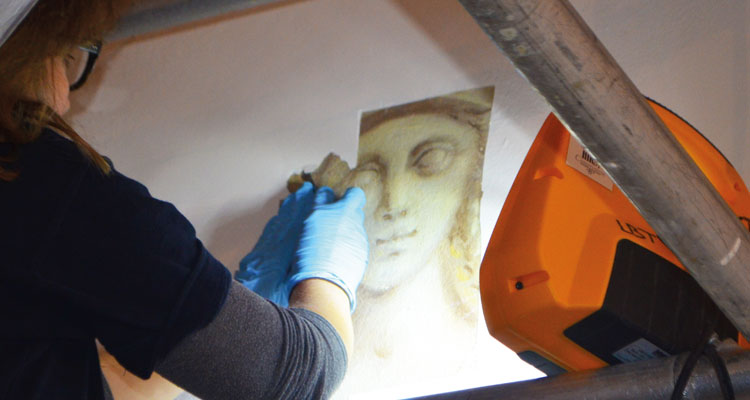 By comparison to past years, 2016 was a very quiet year for Stowe House Preservation Trust’s restoration projects. Through the World Monuments Fund (UK), we were lucky enough to secure money for a small project – the restoration of the ceiling on the Eastern Staircase (also known as the Grenville Staircase).

Over the summer holidays, our appointed conservation team, Hirst Conservation, completed extensive rescue work to the ceiling painting of Fame and Victory by Francesco Sleter (1685-1775). The ceiling dates from the 1740s when Viscount Cobham was improving his home, and also commissioned Sleter to create the State Dining Room ceiling. On the Eastern Staircase, Sleter developed the grand iconographic themes of victorious warfare and civil justice matching Cobham’s political ideology.

This image shows the discolouration of historical varnish layers and over painting. The blue squares in the centre indicate test cleaning carried out before the conservation work began. 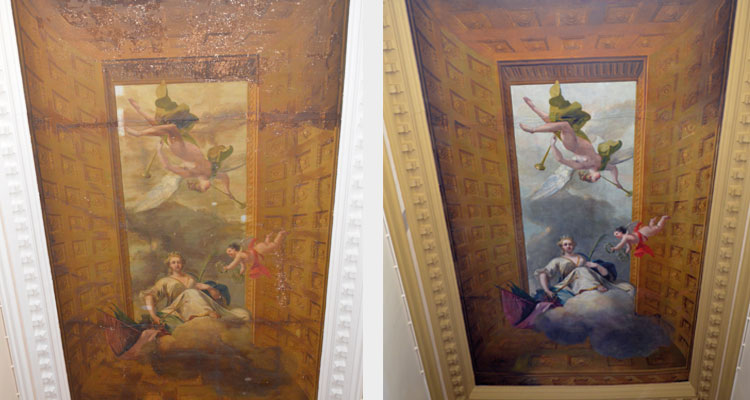 After weeks of careful work the original, much lighter, painting was finally revealed, rediscovering the beautiful tromp l’oeil effect.

Some exciting discoveries were uncovered towards the end of project – the conservators, with their experience and knowledge, were able to detect outlines beneath the layers of paint of original wall paints. They sketched out patterns that they could see. Confirmation came from the original guidebooks from 1759 until 1817 that spoke of ‘war-like pieces’ adorning the staircase walls. However, it was thought these had been destroyed.

Over the October half-term, Stowe House Preservation Trust (SHPT) commissioned Hirst Conservation for a week to explore further their ideas of wall paintings. Rather than working on the staircase walls, because of the practicalities of working on steps, they started to remove the layers of paint on the landing walls. To our greatest surprise – as there is no written documentation – the conservators revealed the face of a tromp l’oeil statue within a painted niche. They also suggested that there are three more images of this kind on the walls and were able to sketch outlines over the current paint layer to demonstrate the rest of the design. This suggests that there are three other statues in niches hidden underneath.

This is all very exciting – confirming that we really do learn something new about Stowe every day – but this was only a week’s work, and all rather unexpected. We are currently fundraising to restore a much larger area, the State Dining Room, and much of our focus will be concentrated here, given the enormity of this project.

A small 2017 project is the return of the statues to the South Front portico. Through detective work by Michael Bevington (Head of Classics) we know where most of the originals are and other similar statues which can be copied so we will be reporting back in the next issue of The Corinthian.

If you are interested in contributing towards any of the projects mentioned above, please contact Hannah Al-Anazi in the Development Office: halanazi@stowe.co.uk; 01280 818326.