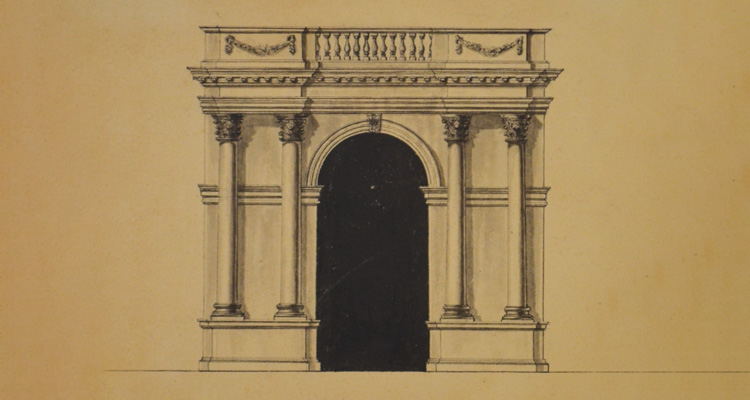 They arrived at the end of an autumn afternoon, it must have been a Tuesday or Thursday, as it was a half day holiday. The year is less certain – 1979 or thereabouts. My duties with the estate workers were finished for the day and I was having a cup of tea at home when Mary Scott phoned from Reception in North Hall:

“There’s a man here with some Stowe plates,” she said. “Are you interested? … You know what I mean, plates with STOWE written on them.”

I knew very well what she meant. Ever since two plates and two sauce tureens from the Stowe Worcester Service had been bought, at great expense, for the School as ducal relics, hopeful dealers had been offering us odd plates and dishes with a flimsy Stowe Provenance of which we had no use for. No doubt these two would be the same.

“Yes, of course I am interested. I’ll be right up”, I replied.

“No need to move,” said Mary, “I’ll give him directions and send him down to you”.

Five minutes later, a car drew up at the Field Houses and the driver took from the boot an untidy pile of plates – not the ceramic plates I was expecting, but old metal plates, scratched and uneven, and cloudy green in colour, which suggested that they were copper. They varied considerably in size. There was one large one, as big as a breakfast tray, and two very small ones, like a six-inch ruler. Most of the others were the size of rectangular table mats, a few somewhat larger. There were seventeen in all.

The driver’s story was that, when his father died, he had the job of clearing the family home. In the back of the garage he had found this pile of metal sheets. Where they had come from he did not know, but since his father had been an auctioneer’s carrier, he might have picked them up anywhere between twenty to forty miles. He assumed that his father had intended to sell them off as scrap metal but had never got around to it. He was about to take them to the dump himself, when he noticed what looked like writing on some of them. He roughly cleaned them with the traditional mix of lemon and salt and that enabled him to make out the name of STOWE on two of them. So, thinking the School might be interested, he brought them over.

My immediate thought was that they were a collection of Stowe views, though they could hardly be from a single set as they varied so much in size. Wondering if I would be able to recognise any of them, I picked out one of the middle-sized range of plates at random and peered closely at it. There was certainly something there, under the Verdigris and the dirt, but it was very hard to make it out. So, I tilted the plate to catch the sun’s rays on it obliquely. My heart missed a beat. There, unmistakably, was one of the illustrated pages from the 18th century guide books, with five or six pictures of the garden temples laid out in two columns. I took out a second plate, which I recognised as another of the pages, when it dawned on me that I had, in my hands, the original copper plates for Seeley’s revised and compact guide to the gardens. These were an invaluable relic from Stowe’s historic past. I began to get excited and questions ran quickly through my mind: could we clean the plates up and take prints from them? What was their market value? In cold terms of cash, what was their worth? How much was the driver going to ask for them? How much should I bid? Had I the authority to negotiate with him? Trying to control my emotions, I asked him, as calmly as I could, how much he wanted for them.

“Just the scrap value of the copper” he replied “twenty pounds.”

With an inward sigh of relief, I accepted his offer there and then, paying him the twenty pounds (with a tip and something for his petrol) and he departed a happy man. Only after he had left did I realise that, in my excitement, I had totally failed in the basic duty of finding out his personal details so we could get in touch with him again. To this day, I have no idea at all who the driver was, or where he came from.

But, I had the plates. I immediately took them up to the Art School where Guy Scott helped me sort them out and identify them. The two small strips were the least important, being the kind of decorative band that might be put at the foot of a gala menu or programme of evening entertainments. Most of the middle-sized plates were for the illustrated pages of the guide books of the mid-1760s, with a couple from the following decade and three or four from around 1800. The largest one was the engraved plate for the mezzotint reproduction of John Jackson’s portrait of the First Marquess hanging at Christ Church in Oxford.

It was this last plate which sparked Guy’s enthusiasm and he decided there and then to try and get a print from it. He took the cover off the old hand-printing press, oiled the works, assembled the blankets and padding to adjust the pressure, took out two bottles of fluid to clean the surface of the plate, found some suitably hard paper, which he dampened, and selected the right printing ink – we were on our way! The result that evening was less than impressive, but we had demonstrated that the old plate still had some potential, even if parts of it were badly worn. A few days later Guy enlisted the help of a friend who was a practising printmaker and together they achieved a good enough print to be framed and displayed in a show of acquisitions which we put on in 1984.

My real interest was in the guide book illustrations, I phoned the good news to John Taylor, the Chairman of the Governors and our chief ally in rescuing historic items from Stowe’s past. He too was excited by the possibilities and said he knew someone who could help us (John almost always knew someone – this time it was the Director of the Tate Gallery). A short time afterwards, he collected the plates himself and took them to the Print Department at the Tate where the experts did a wonderful job of cleaning the plates until they shone and took an excellent set of proof prints for us.

Sadly, they had to report that the old plates were so pitted and damaged that it would not be possible to restore them to a good enough state to make a regular printing run possible. There was one, however, which had fared better than the others and that was the long illustration of the North and South Fronts of the House. This was used as a fold-out frontispiece to the guide book editions of the late 1770s. If we printed it in sepia rather than black they said the image would still stand out clearly but the pitting would not be so evident – and it would also give an antiquarian feel to the print. So, we took their advice and commissioned a professional printmaker to make twenty or thirty copies, which may still be held by members of the Stowe community.

However, the plate with the first illustration of the Corinthian Arch has survived well enough to have prints taken from it. This appeared in the 1767 edition of the guide book, the year after the Arch itself was completed.

My interest in Seeley started soon after I came to Stowe in September 1950. In that same year, Laurence Whistler published his landmark article on the authorship of Stowe’s garden temples. In this, he explained that the evidence for dating and for much other information was in The Guide to the Gardens, published in 1744 and reprinted every year or two, with updated details, for the next thirty years or more. (At this time, the Stowe Papers were still inaccessible and unknown in California). There was a good collection of twenty or thirty guide books in the Library at Stowe, and, helped by the Librarian, Molly Treadgrove, I was able to find my way through the various editions. Laurence Whistler finished his architectural research on Stowe by writing an admirable Guide to the Gardens, a paperback which consciously echoed Seeley’s guide books for a modern generation. By the time it sold out, Michael Gibbon and I had begun our research on the history of Stowe and we took over the editorial roles, ‘rebuilding’ and updating several editions over the next fifteen years.

In 1973, I used all of Seeley’s guide books and maps, as well as other maps or plans of the estate in an article on the development of the gardens for the Stowe number of Apollo, celebrating the School’s Fiftieth Anniversary. Two years later, in 1975, when I was spending a sabbatical term researching Stowe’s history at the Huntington Library in Los Angeles, I was able to edit one of the Stowe guide books for the Augustinian Reprint Society and I chose George Bickham’s 1750 edition of The Beauties of Stow (sic) because it was the first to have full-page illustrations and I thought that this would make it a more interesting volume.

But it involved me enduring three months of tedious labour, while I analysed Bickham’s text line by line to find out how original it was. The results were stark: 98% of the whole book (all but 40 lines) had been lifted from identifiable texts on Stowe already in print, cobbled together and published with a set of illustrations. This amounted to an unscrupulous attempt by Bickham the interloper to challenge Seeley’s position and oust him from his business of providing Stowe’s guide books. But Seeley fought back and for the next twelve years there was a ‘war of the guide books’ in which both men tried to outdo their rival with new editions, improving the text and the illustrations, and adding a map and plans of the garden buildings. In the end, it was Bickham who gave up, leaving Seeley master of the guide. My sympathies were entirely with Benton Seeley, the local writing master for Buckingham, who had the initiative to create the guide book and the determination to beat off the attacks of his professional rival. He and his family successors went on producing Stowe’s guide books until 1832.

When the Hall Bequest began its work in the 1980s, one of its first projects was to put Stowe’s collection of guide books in order, repairing the damaged copies and rebuilding those that had disintegrated. When copies of editions not in the collection came on the market, we always tried to buy them for Stowe. There were two that we particularly wanted, the first edition of 1744 and the Library Edition of 1825, with many of the usual illustrations laid out in a large format within a handsome binding, which could take its place on a library shelf. The 1744 edition turned up within a few months, but we had to wait twenty-five years before we ran a copy of the Library Edition to earth.

There is much more that might be said about some of the matters concerning Seeley, but this is not the right place to do it. However, this brief summary is probably enough to indicate the important role he played in Stowe’s history, and I hope it may go some way to explaining why I felt, first, such shock, and then such excitement on that autumn afternoon forty-odd years ago.

Seeley’s original Stowe plates had just fallen into my lap out of a blue sky.