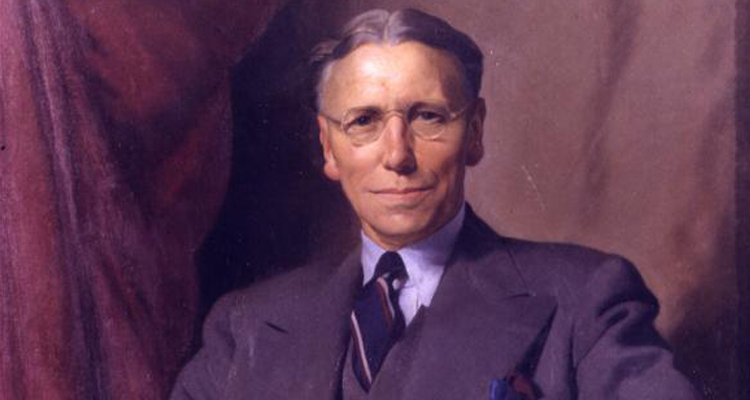 Serendipitously, the following two memories of J.F Roxburgh hit the Old Stoic inbox within weeks of one another – are there any other Old Stoics out there who have memories of Roxburgh from the Old Ride Preparatory School?

It is 11.00am on a nice spring day. We are all sat at our desks in silence in Form 4B at the base of the arch, which stands to the side of the driveway at the Old Ride Preparatory School, Little Horwood. We are waiting for the sound of gravel being thrown up by our Master’s sports car* against the wall of the classroom as he expertly comes to a halt not quite kissing the wall.

French is not my favourite subject. It sounds good, but there are too many exceptions and getting a grasp of the language is beyond me, despite the efforts and kindness of our Master. He is totally different from the other Masters here. Well-dressed and groomed with a slight smell of eau de cologne. His hair is parted in the middle and he keeps his handkerchief up the sleeve of his jacket. The shoes are polished with no scuffs. Not the sort of a thing that a young boy of twelve would normally notice, but I am the son of a famous shoemaker and it is natural for me to look down at people’s shoes. “My boy, you can tell a lot about someone from the state of their shoes” I was told frequently.

There is still no rattle of gravel on the driveway, but a great bull of a man opens the door of our classroom. It is our Headmaster Toby Flynn, who walks down to the low dais to the end of the classroom and turns. The ever-present smile has gone and we fear the worst. “I regret to tell you that I have received a telephone call saying that Mr Roxburgh will not be coming in this morning. This will be a Latin lesson with me instead.” A feeling of relief as Latin is my strong subject.

Lunch is strange and almost silent. During the main course we usually have music played to us, but not today. Nobody speaks and even the second course is very subdued. There are murmurings flying about that Mr Roxburgh has actually died in his bath. The feeling of loss grows amongst all of us. He had a way of getting the best out of us without any of the usual threats and made us feel special on our birthdays when we were given a trug of seasonal fruit to be handed round our classmates.

Over sixty years later, with these memories safely stored away I have one question – did anyone else from Form 4B become an Old Stoic? If not, it is quite possible that I am the last Old Stoic to be taught by J.F.R. A small claim to fame, but nothing compared to the memories of a great man.

*It is a long time ago, but my recollection is that JF’s drophead sports car was a Sunbeam Talbot which he thoroughly enjoyed.

J.F. retired from Stowe in 1949. But this was not to be the end of his teaching career for he was recruited by Toby Flynn, the Headmaster of The Old Ride Preparatory School at Little Horwood, to give occasional French lessons. Aged 12, I was mightily impressed by this tall, immaculately dressed gentleman who arrived in our rather bleak classroom on a Tuesday morning, trailing a cloud of eau de cologne and then producing a beautiful silk handkerchief from his sleeve to mop his brow before starting the lesson.

One of his parting gifts from Stowe was a silver Sunbeam Alpine with louvres which ran the length of the bonnet. He discovered very quickly that the 400 yards of drive, which linked The Old Ride to the road, were badly potholed and evidently decided that it would be better for the springs to drive down the grass verge – which he did at great speed and much to the annoyance of Toby Flynn. I think that Toby was as much in awe of J.F. as the rest of us and probably felt that he should say nothing for J.F. continued to drive on the grass.

Might I be the only person alive today who was taught by J.F.?