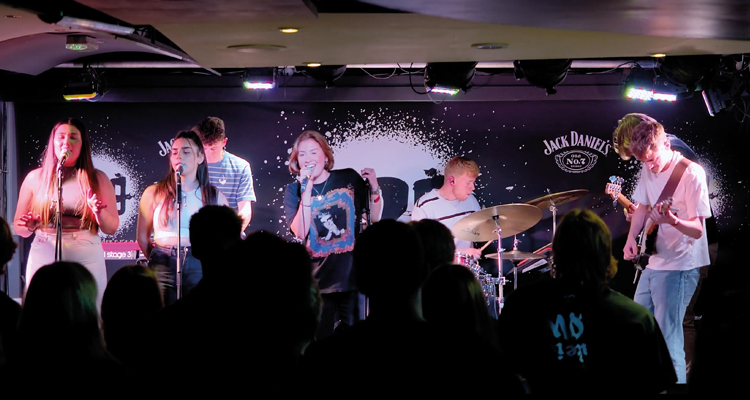 Our-man-in-the-mosh-pit, NIGEL MILNE (Chandos 68), gives us his appraisal of an evening of Old Stoic Euterpian creativity!

The evening of Tuesday 28 September saw the culmination of our hopes and aspirations, delays and cancellations (due to the pandemic), hard work and greatest wishes in being finally able to put on our UNSIGNED! event at 229 Great Portland Street – and what an event it was too!

The raison d’etre was to give up-and-coming Old Stoic singer/songwriters and bands a platform from which to showcase their talents to members of the music industry as well as to the general Public.

Having originally planned to hold the event at Wilton’s Music Hall, we decided to opt for a smaller venue knowing that a lot of people were still not confident with attending crowded places at the risk of contracting Covid-19 and we certainly did not want the acts to be performing to a half empty auditorium. We felt that we would have been happy if we had managed to attract one hundred guests – in the event, we topped one hundred and fifty which was amazingly gratifying.

Due to the delays and cancellations, the format of the event took on a different hue in that some of the original acts from the April 2020 line-up were unable to re-schedule – and as a result of the Lockdowns, the remaining artists had been incredibly industrious and creative, with some of them changing their style altogether, with the result that one of the solo acts had morphed into a seven-piece outfit!

Anyway, the day duly arrived and Shannon Devlin (Stanhope 15), one of the acts in a “Well, here we go!” sort of way, leapt into a cab to go to the venue in order to oversee the sound checks for all of the acts.

On arrival, being greeted by the physically calming presence of the totally unflappable Anna Semler was of great comfort to us both!

With the soundchecks well under way, I conducted a series of interviews with each of the acts, which we videoed (and which can be viewed below) in order to get some background depth to the event. These went really well with each interviewee proving to be an entertaining, fluent and happy to chat. I also succeeded, much to my surprise, in conducting the interviews without asking each act exactly the same questions.

All of this having been done, your-man-in-the-mosh-pit was feeling temporarily redundant and so in my self-appointed role as Shannon Devlin’s aide, I wandered out to get us something to eat while she was busy rehearsing.

During the short time that it took, my emotions changed from “Well, this is all going pretty well.” to “Sh**cakes! – This is really happening!” as I returned to the venue. And then, yes – people started to arrive and as they did, my confidence grew as I realised that we really did have a show on our hands as the auditorium filled up.

Now, the main problem with which we were faced was that, normally at a gig one has a Headliner and one or two support acts – max. We had six acts. So, in order to allow each one a 20-30 minute slot, the turnarounds had to be executed speedily and with maximum efficiency. As each act was of a completely different musical genre the mood would alter radically too.

In order to “get the party started” I decided to get everyone in the right mood and gave Ryker Sear the opening slot. This band, fronted by Regan Vincenza (Nugent 05) used to be a hard rocking bunch of thrashers. However, tonight, Regan donned the mantle of an ‘80s/’90s pop siren by channelling her inner Britney Spears and giving us a set of seriously fun and poppy songs with more meaningful story lines. Due to the unavailability of her full band, it was left to Regan and a single colleague to create a full band sound, which they did to huge effect by dint of dextrous usage of loops and pedals. It was a really great start to the evening.

Second up was solo performer Shannon Devlin, who delivered a keyboard driven set of exquisite charm and poignancy. Shannon’s writing style is confessional and reflective with subject matters reflecting incidents with which we in the audience all empathised. The heartfelt yearnings of her songs were lightened by her utterly charming and engaging between-numbers banter. This was Shannon’s first experience as a solo performer on a public stage – and she totally nailed it.

Another change of mood followed with Celest Lamberti (Stanhope 21) and her band Blue Psyche. Performing an elegant selection of jazz-infused numbers of funky sophistication which had many members of the audience looking questioningly at their glasses of beer or wine and thinking that a dry martini would probably have been a more appropriate choice!

Celest’s languid and laid-back vocals were complemented by some seriously impressive musicianship – great guitar duelling with funky bass runs, digitally dextrous chattering lead guitar breaks, virtuoso keyboard playing and inspirational drumming. They are an excellent band and interact with each other brilliantly.

Next up was a late addition to our line-up, Caspar (Chatham 17). A few weeks before the gig, I had been sent the rough, unmixed first take of his debut album which, on first listening, blew me away to the extent that I listened to it twice more back-to-back in its entirety! Really good songs with excellent musical accompaniment and with Caspar’s vocal delivery, which I can best describe as really “elegant” (compared with that of some other male contemporaries) and with good diction and seriously impressive note sustaining. Consequently, when I received a call from him explaining that he had no less than four record labels interested in signing him but all of whom, before making their offers, wanted to see him perform live and solo – and was there any chance of me being able to fit him into our already tight schedule – “Err, YES! – I should say so! “

Rather than performing, as on record, with his full band, Caspar, with great confidence, delivered a mesmerising solo performance accompanying himself on acoustic guitar, which gave us all an intriguing foretaste of what to expect when his album is finally released – and I for one cannot wait to hear it in its glorious fully mixed incarnation.

When I last saw Mali Mae (Nugent 18) perform in London she was alone on the stage with just an acoustic guitar and a mic stand to hide behind as she overcame her nerves and delivered a selection from her oeuvre of introspective songs of love, loss, self-doubt and regained confidence. Tonight, a totally re-invented Mali Mae hit the stage accompanied by a six-piece backing band of such drive and cohesion that it was a pure delight watching them feed off and react with each other. It was a seriously tight and well-rehearsed performance of such power, energy and unbridled fun that brought the audience right to the front clamouring for more.

As if that wasn’t enough for us all, our Headliner Talia, took to the stage with her new band for the first time performing together and gave us a jaw dropping set of original compositions and covers of enormous power and intensity. Many of the audience were already familiar with Talia’s work as a solo performer (she was an X-Factor finalist) and with her work with the band King’s Daughters. She is being mentored by Brian May of Queen, who has also produced some of her recordings.

Talia has a voice of colossal range and power that one could imagine it to have been trained within the confines of the Lockheed wind tunnel! She gave us a set steeped in soul complemented with ‘gospely’ type backing singers and some blistering guitar work –what a way to end the show!

Well, that was one hell of an evening! Six acts in three hours performing six contrasting musical genres – wonderful stuff!

It just goes to show the calibre of Stoic talent being nurtured in the wonderful Chung Music School at Stowe – I really think that this should become a regular event!