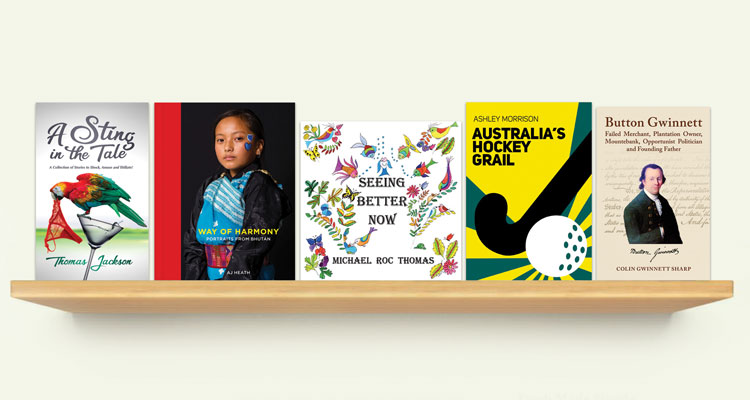 I called my book Living the Dream as, in the main, that is what I have been able to do! It is the story of my life which has taken place in three countries in which, for the main part, I managed to enjoy myself doing what I loved to do most. As you can imagine, my days at Stowe in the JF Roxburgh era are very much a part of it, found on pages 17-22. If you would like a copy of the book, please email patricke@uwclub.net, copies are £12.00.

A Sting in the Tail by Sir Thomas Jackson (Temple 64)

A Sting in the Tail is a collection of short stories ranging from an innocent game of golf to a beautiful Queen Anne house – with a difference; a sleepy Sussex village to a BBC quiz show in London – with a lady in her eighties; a young blade to a successful older woman – with an interesting take on romance. Story to story, there is always the promise of the unexpected. Geraldine James writes,

“These stories are short, sharp and a little bit naughty. The perfect late night snack. I loved them!”

In 2015, documentary photographer AJ Heath travelled to Bhutan. Making it his home for a year, he gained unrivalled access to an enchanting country juggling the weight of tradition with the onslaught of modern life. In order to understand better a nation where happiness is famously prioritised and prescribed by the government as part of the Gross National Happiness initiative, he set up an outside studio in the capital city and invited the general public to be photographed. Way of Harmony is a collection of stunning portraits from this mystical mountainous kingdom, alongside illuminating and touching conversations between AJ and his subjects, which reveal their personal quests for happiness and unique perceptions of this fascinating nation. The book is available from online bookshops and www.ajheathphotography.com

Readers enter a world of fascinating characters, animals and locations guaranteed to appeal to children and parents everywhere. Central to what influences the stories are the many years Michael spent ‘on the move’ and his last ten years living in and absorbing the culture and language of Sri Lanka in particular, as well as elsewhere in Asia and beyond.

The premature birth of his daughter in 2006 and his subsequent concern for her sight, add special poignancy to his decision to change creative direction.

Poetry? No, much more fun!

Every four years when the Olympic Games come around attention turns to the Kookaburras, Australia’s men’s hockey team. For over 30 years the Kookaburras have been ranked in the top five teams in the world. Frequently in the period between Olympic Games they have swept all before them, winning major tournaments across the globe. Yet Olympic gold has proved elusive. Why?

Australia’s Hockey Grail looks at Australia’s history at the Olympic Games since it first participated in the Field Hockey in 1956. It explores the expectations placed on the team, and when that expectation was borne by talking to those who had to carry the burden of an expected gold medal, and then been branded unfairly “failures” for bringing home a different colour medal.

Copies are available on Amazon or Ebay or ashleymorrisonmedia.com

Largely ignored by historians, Button Gwinnett’s life has often been the subject of myth and folklore.

Now, Colin, an indirect descendant, has pulled together the various strands of Gwinnett’s life to produce a readable account of Gwinnett’s life from the time he arrived in the American Colonies to start a career as a trader and then bankrupted plantation owner, to his meteoric career as a politician which took him from being a parish councillor to Signer of the Declaration of Independence, Speaker and then President of the State of Georgia in the space of nine years and culminated in an untimely death in a duel.

This book is the story of a man driven by personal ambition to achieve his political aims during the turbulent years leading up to the formation of the United States.

Thomas, Lucy and Alatau: the Atkinsons’ Adventures in Siberia and the Kazakh Steppe by John Massey Stewart (Walpole 51)

Famous in his lifetime as ‘the Siberian traveller’, he spent seven years travelling nearly 40,000 miles through the Urals, Kazakhstan and Siberia with special authorisation from the Tsar, producing 560 watercolour sketches – and many published here for the first time – of the often dramatic scenery and exotic peoples. He kept a detailed daily journal, now extensively quoted for the first time with his descendants’ cooperation.

This is also the story of Lucy, his spirited and intrepid wife and their son, Alatau Tamchiboulac, called after their favourite places and born in a remote Cossack fort. They both shared his many adventures and extremes of heat and cold, travelling with him on horseback up and down precipices and across dangerous rivers, escaping a murder plot atop a great cliff and befriending the famous Decembrist exiles.

John noted for his own travels, is an authority on Russia and the former Soviet Union. As writer, lecturer, photographer and environmental activist, he has visited the USSR/Russia 30 times since 1960 and crossed the country twice. He has lectured and given academic papers on different aspects of past and present Russia in the UK, USA, France, Israel, Canada and Siberia, which he has visited eleven times. He co-founded with the Conservation Foundation the London Initiative on the Russian Environment and has been a Specialist Adviser to a House of Commons environmental enquiry and a delegate to the NATO Advanced Workshop on ecotourism at Siberia’s Lake Baikal.