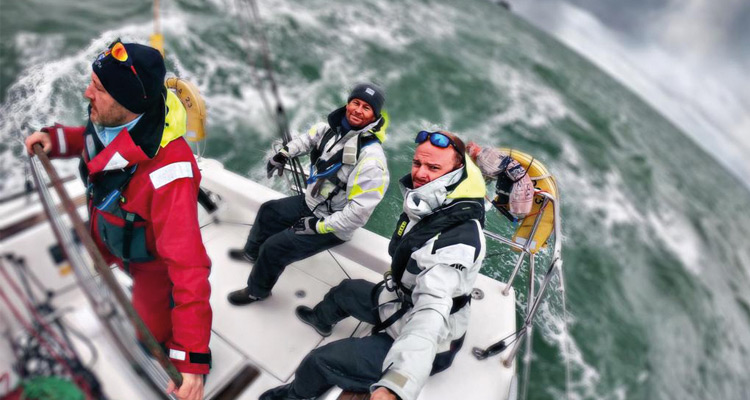 On 11 October 2019, the excited crew reported to the Quayside at Port Solent to compete in the hotly contested Arrow Trophy, a sailing competition between independent schools dating back to the mid 1980s, initially a series of Match Races on The Solent between Harrow and Eton.

Under the leadership of Euan Welsh (Chandos 10), we have been competing in the series with varying degrees of success over the past three years. This year the lure of the Rugby World Cup took him away to Japan, to leave us in the more than capable hands of skipper Charles Douglas (Temple 77), a veteran of Atlantic races and probably most things with sails that float.

The crew of repeat offenders included myself, having relinquished my role of OS Chair and my epic seasickness from the 2018 boat. The new Chair, Hannah Durden (Nugent 01), an extremely competent and impressive yachtswoman helped to whip us all into shape for what looked like two days of highly competitive racing and socialising with some 24 yachts participating.

We settled down for a choppy ride to Cowes on the Friday night, arriving wet, hungry and thirsty. Hannah discovered a superb, unique and characterful hostelry run by an ex con, where we all met up and lined our stomachs for the night and days ahead. Hattie Lewis (Nugent 10), already on the island and a professional sailor who knows a thing or two about the spinnaker joined us for dinner and rum…a sailor’s privilege and a drink so fine at least two of us purchased a bottle for the weekend ahead. Who knew Rum was made in Scotland?

Adrian Salmon (Grafton 76), a strong winchman, joined the team as did Paddy Stubbs (Bruce 86), another keen sailor with many years of expertise. Both had dried themselves off from the soaking received on the Friday crossing. Roddy McLauchlan (Temple 01) added a much needed expertise, sailing the Scottish Isles, and also became team videographer and cameraman. I provided the team with a ringer, Tim Selby, tall blond rugby playing dinghy sailor who provided the team with much appreciated muscle at the mast.

The final addition to the team, one Duncan Syme, a Stowe teacher and well known sailor amongst the teams gathering in Cowes. I think he would have made an excellent pirate in another life!

Dawn on Saturday saw us heading out on a becalmed sea, at odds with the previous evening, for a day of tactical racing, catching brief gusts where we could with a lot of gybing and copious use of the big kite…albeit in a rather gentle way.

After a full, if slow day on the Solent, we all gathered together to celebrate the first day with an awards ceremony where copious prizes were given for the previous year’s racing including the famous Arrow Trophy and not least the OSSC Trophy.

Sunday saw a few sore heads and a very lively sea. We headed out to be met by very strong winds and mandatory three reefs in the main. After some fast fleet cruising in the hope of the elements relenting the organisers decided that the cocktail of winds gusting 40 knots plus 24 sore headed testosterone driven plastic boats all converging on racing marks was likely to be costly so, sadly, all racing was cancelled. However, as we were out there, we had a great day battling the elements and having a challenging day on the waves before returning to Port Solent. Expert skippering and more than amazing cups of tea brewed in challenging conditions below made for a fantastic day.

Suffice to say, we all had a great time being tossed around on The Solent, made new friends and all left swearing to return next year. My ringer was very, very impressed by the camaraderie of the team and has volunteered to come next year if we’ll have him. A truly Old Stoic experience.