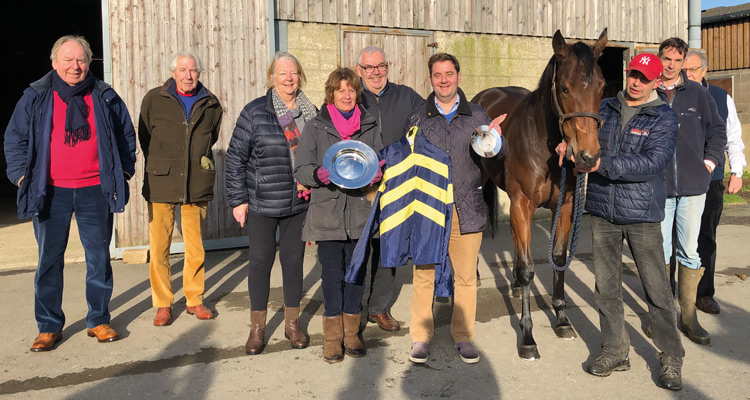 The Old Stoic Racing Club is now in its third season and made up of mostly former pupils and parents with leaving years represented from 1953-2004.

Our two horses are Bourbon Beauty and Mild Illusion who have been leased to us by our Old Stoic trainers, Alex Hales (Chandos 92) and Jonathan Portman (Chatham 83). Members of the Racing Club have experienced tours of their training yards, hospitality at racecourses including Newbury, Newmarket and Sandown as well as owners badges when either horse races.

Mild Illusion has had a sensational season finishing out of the first three only once out of eight races. This daughter of Requinto was victorious at Salisbury and Windsor on her way to demolishing a classy field at Newmarket in the Listed Bosra Sham Fillies’ Stakes at Newmarket on 1 November 2019, ridden by Josephine Gordon.

She only cost Jonathan Portman £1,000 at the sales as a yearling and amassed just over £60,000 in winnings during the summer. This success combined with the involvement of Robert Cooper (Cobham 68) – a Presenter on Sky Sports Racing – made our Racing Club a hit with the racing press as we secured interviews on Racing TV and articles in the Racing Post as well as a nomination at the prestigious annual Racehorse Owners Association Awards.

Bourbon Beauty (named with a reference to the School’s playing fields) started out with an encouraging third at Southwell on her debut ridden by OS jockey Harry Bannister (Chatham 12). There was much to like about her first run and she will be aimed at bumpers (introductory flat races for future national hunt horses) and hurdles between now and the end of the season in May 2020.

Henry Kimbell (Chandos 04) has established the Racing Club. He explains, “Racehorse ownership is one of the most thrilling things to immerse yourself in. Many Old Stoics work in the racing community and I felt there was a natural opening to bring together a group of past pupils, current and former parents and their friends to have a couple of horses in training with two old boys who are successful trainers. Having the link to Stowe is the bond that keeps us together and I am very proud that we are probably the only school who could create a Racing Club with the jockey, trainer and owners all past pupils!

It has taken a while to get going but after the success of Mild Illusion and the promise shown by Bourbon Beauty we have significant momentum to now build on from this.

I am keen to make it affordable and fun. It would be brilliant to hear from any Old Stoics who could be tempted into any of our future ventures.”

15% of any prize money generated by both horses until May 2020 will be donated to Stowe School Foundation, which provides funding for bursaries and scholarships to the School. To date the Racing Club has raised just shy of £15,000 for the Foundation.