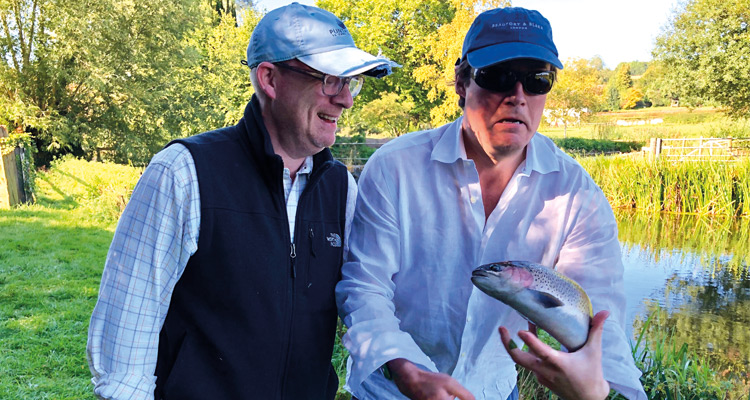 The one that got away!

A good year. The year started with our annual general meeting at the ever hospitable Flyfishers’ Club in Mayfair, where we met to plan the year ahead and the many fishing trips to be enjoyed. This was followed-up with our pre-season drinks in April, again at the Flyfishers’, where the sense of anticipation was palpable.

Our first outing was to the picturesque waters of the River Avon and the chance to encounter plump brownies during the mayfly. The day was led by Jamie Emslie (Temple 05) and his father, Brian, and Edward Jackson (Bruce 05), James Kayll (Walpole 00) and Jason Raikes (Walpole 85) took advantage of their guiding skills to enjoy a bumper catch in the most beautiful of surroundings; a vignette of the Club.

Next was the different prospect of fishing the River Wandle that meanders through southern parts of the capital. A more striking contrast one could not imagine, however, peeling away the urban cityscape revealed a beautiful little river full of fish and trout of staggeringly large proportions; perhaps an advert that living off urban scraps isn’t quite so bad after all?

Angus ‘James’ MacDonald (Temple 07) and yours truly enjoyed this adventure, pitting our wits against the wily fish and when found wanting dining at quite literally the least country of country pubs one could find. In piscatorial terms the inhabitants of this establishment may be liken to bullish pike replete with numerous and to this eye, ugly, tattoos. Using my other eye, however, one sees a river that holds exceptional brownies which may, with perseverance and no small amount of luck and cunning, be tempted on future occasions. I sense a re-match and I will note our ‘successes’ in due course.

The beautiful autumn beckoned and it was to Stockbridge that a group of members answered its siren call. Alighting at the lovely Greyhound pub prior to our ‘double-header’, we enjoyed bacon rolls and coffee whilst gazing in wonder at the magnificent River Test. It is no exaggeration to say that many of the assembled had never seen such large steroidal fish and in such numbers. Casting off the pleasures of breakfast we took the fight to the fish, and not wishing to recount every battle, it is safe to say that it was a truly glorious day, in magnificent surroundings, and accompanied by one’s great friends; if the Avon in the mayfly was a vignette then this was Cartier-Bresson at his finest.

The highlight of the day, amongst so many, was Harry Egerton’s (Grafton 03) enormous brownie. For this, we found the advantage of fishing close to the Greyhound and we dined like royals on the banks of the Test, in the brilliant autumn sunshine, eating a freshly caught and quite superbly prepared brown trout. To slake our thirst chilled Rose flowed, and if there is a finer way to spend an afternoon fishing with one’s friends; then dear reader, please tell this humble piscator.

The next day dawned slowly having fully partaken of the facilities afforded when staying in Stockbridge. Full Englishes were consumed and four went off to tempt the fish of the Avon. To say this was slower than the previous day would be accurate, but it would also somewhat belittle the charms of fishing for wild trout in a wild river. Small flies and stealth were the order of the day as the sun shined brightly on our endeavours. Fish were caught, fish were missed and fish were disturbed but our fun along with our friendships grew, and we were happy and contented when we downed arms at a riverside pub for drinks and lunch.

Such was the success of the ‘double-header’ it now seems difficult to imagine the calendar without it and one can be safe in the knowledge that the beats, hotels and ephemera required to host six or so Old Stoics to fish the Test and Avon in the autumn have already been booked and paid for.

In the dying embers of the summer, on the sunlit terrace at the Savile, another highlight of the year revealed itself. It was here that a couple of us met, over dinner and kummels, the redoubtable Chris Lloyd. For those not in the know, Chris is the new Master In Charge of fishing.

Chris is passionate about fishing but more importantly, he is enthusiastic and engaging and bursting to share his love of the sport. We were greatly impressed with his plans and I have the distinct impression that fishing will flourish under his tutelage and that many Old Stoics will look back fondly at their time fishing at Stowe.

In his book Norman Maclean says he is ‘haunted by waters’ and through the swirling eddies of life, the barracking tides of Brexit and the cruel undercurrents of politics, it is comforting, reassuring and heavenly to realise that indeed a river does run through it.

It is the aim of the Club to meander this river in the company of one’s great friends and if this is of interest then please contact Ian Bendell Ianbendell@hotmail.com