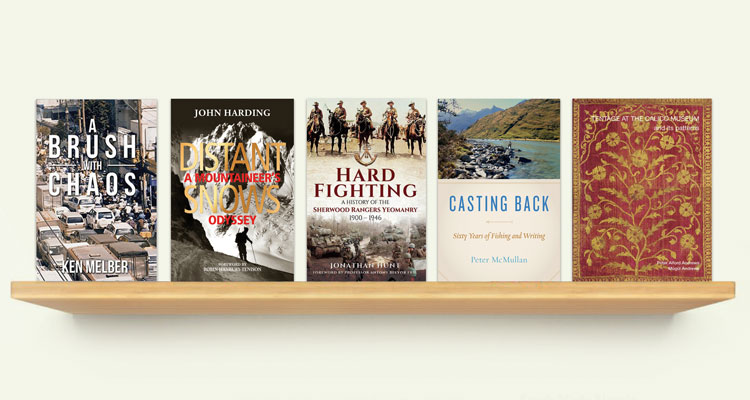 Ken Melber was the Director of Art and Housemaster of Bruce, and was known for his fine artistic skills and his sense of humour, the latter of which is evident in his first novel, A Brush With Chaos. The book vividly describes the adventures and challenges he and his pregnant wife faced whilst living in a remote area of Nigeria in the 1970s.

The book is published by Austin Macauley and is available in bookshops and on Amazon, as well as the following website: abrushwithchaos.co.uk or via Ken on: melberken@hotmail.com

The story the book tells is a metaphor for the social history of England in the 19th Century in all its forms: the Corn Laws, Luddism, Republicanism, Reform, and Chartism and above all the Industrial Revolution. Nottinghamshire was a key player in almost every case.

If you would like to purchase a copy, please email Jonathan directly for an order form: jonathan_hunt@btinternet.com

Casting Back: Sixty Years of Fishing and Writing by Peter McMullan (Temple 53)

Casting Back: Sixty Years of Fishing and Writing, to be published by Rocky Mountain Books, Victoria, B.C., is now in print and was launched in Nanaimo, on Vancouver Island, on 20 November 2016. The Stowe chapter, ‘1950s Stowe School: Fishing for Memories’ runs over four pages starting on page 21. The book is available through Amazon UK or can be purchased via: www.rmbooks.com

Peter and his late wife published a book in 2015 – a catalogue of the holdings of tent panels and tents at the Calico Museum of Textiles, Ahmedabad, Gujarat. This is an extension of the existing two-volume catalogue of textile holdings by John Irwin of the V & A and Margaret Hall, published in the 1970s. The new book, however, contains extensive comparative material. Its name is Tentage at the Calico Museum and its Patterns. ISBN 978-81-86980-51-4.