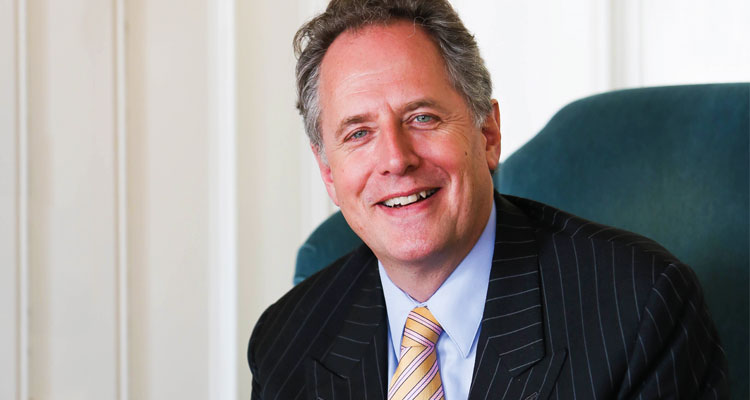 An Interview with Anthony Wallersteiner

Sam Montgomery (Temple, Upper VI) interviews Anthony Wallersteiner about his love of the arts, inspiration and achievements at Stowe.

Sitting in your study, it is clear to see you have an affinity with the arts. Can you identify some key people or places that have inspired your love of art?

I’ve been extremely lucky in that I went to school in one of the most beautiful schools in the country: King’s Canterbury. I have also been fortunate to teach in some extraordinarily beautiful schools.

History and Art History at A level led me to a PhD in Modern Art Theory, which took me to Cornwall to study 20th century Cornish art, specialising in the paintings of Peter Lanyon. I’ve always had a strong affinity with painting, sculpture and architecture.

I am interested in the way art acts as a signifier of culture, holding up a mirror to the time in which it was produced. Art analysis also tells you a little about the zeitgeist of the time, and what was going on in the mind of the artist.

I grew up near the sea, so one of the reasons I wanted to visit Cornwall was that I liked the idea that place plays an important part in creativity. St. Ives, in particular, is a place associated with a sense of the liminal. I was fascinated by how abstract artists respond to place in the same way that artists such as Turner and Constable did in the 19th century, in their attempts to capture the sublime.

Having personally been fortunate enough to have visited Kiev as part of the McElwee Award Scholarship offered by the School, I am particularly interested in the time you spent in Eastern Europe studying Anti-Soviet politics. Could you please tell me something about these travels?

In the mid 1980s, I won a university travel scholarship to go to Eastern Europe. I was working with a magazine called Index on Censorship which publishes the writings of dissidents who are generally banned or censored in their own countries. Focusing mainly on Czechoslovakia, I was interested in how a country that had been invaded by the Soviet Union in August 1968 had normalised, and what had happened to the writers and intellectuals who had led the Prague Spring.

I interviewed writers, brought books with me and took manuscripts out – getting them published in the west. The fact that these dictatorships existed in Europe fascinated me, and I remember feeling astonished that the things we take for granted, such as freedom of movement; expression; thought; religion, did not exist – just two hours flying time from London. It seemed strange to me that nobody thought it was abnormal that more people weren’t actively working against the oppression.

It felt like going back 40 years earlier, with horse and carts still being used outside of Prague. I even worked as a chimney sweep in a town called Nachod for a short period of time. My cover story if I ever got picked up for spying, which I was always slightly worried about due to my association with a group called Charter 77 who had signed a declaration against the government of Gustáv Husák, was that I was an historian conducting research on turn of the century architecture. I was picked up once by police as my visa had expired which was fairly alarming. I feigned stupidity and puerile ignorance and thankfully was let go – people love students, even the police, because they always remember when they were young and foolish.

Having worked closely with the Stowe House Preservation Trust and the National Trust for many years now, what is your favourite vista at Stowe and why?

The view from the Gothic Temple looking down across the Palladian Bridge and up to the Temple of Friendship, is a particularly beautiful view, especially when the sun is setting. Another fabulous view is through the Doric Arch just down from the South Front. Here, looking towards the Palladian Bridge with Stowe Castle in a bluish haze in the distance, the scene looks like a Poussin or a Lorrain painting. The framing devices are extraordinarily beautiful. I never tire of seeing the view from the South Front, looking down across the lawn to the Octagon Lake and up to the Corinthian Arch. At sunset, shards of light are thrown by the arrangement of trees, producing an amazing chiaroscuro effect of light and darkness across the South Front. This was a very clever and deliberate ruse by Capability Brown.

JF Roxburgh once stated that a Stoic should be “acceptable at a dance and invaluable at a shipwreck”. How far and in what ways have you attempted to maintain an ethos of balancing education inside and outside of the classroom?

I think that quote may be slightly apocryphal, as I am yet to find the source of when this was said by Roxburgh. I think it may have been invented and that legend has, in a way, become fact. Putting it simply, I think ‘acceptable at a dance’ means socially aware, confident without being arrogant, and having the social skills to be good company. The shipwreck analogy is used to signify that when it comes to matters of great importance, all social niceties are made redundant and, instead, you really need to show true character when required. I think it is a nice aphorism which, to me, conjures up an image of the Titanic.

At Stowe I think it is as valid and legitimate to be the Master of Hounds as it is to be the Captain of the 1st XV. I do not think Stoics feel that there is a huge pressure on them to achieve in a specific area, which results in an equivalence between the athlete and aesthete, the poet and the rugby player, the scientist and the dramatist. I think we’ve achieved a pretty harmonious balance.

We are more selective than we used to be, that is true, but we still find room for mavericks and eccentrics and for people who have an interest in slightly off-beat things – they still find a place at Stowe. I don’t think there are many schools in which you’ll find a group of pupils hunting one day, and then taking part in a robotics competition the next. The School has always, and continues to, encourage diversity and different interests to flourish.

When future generations look back on the history of the School and its first hundred years of existence, what would you like your legacy to be?

I suppose like doctors, ‘do no harm’ is number one. To try and leave things better than you found something, and leave a positive imprint wherever possible. I hope I have, in some small way, reconnected Stowe with the early ethos of the 1920s and ‘30s, which is to put the fizz back in the bottle of champagne, making it a bit more effervescent, a bit more fun, and really making sure the individual is valued.

School is to be enjoyed, not just endured. I hope that Stoics feel that they leave Stowe, as Roxburgh once said, “Every boy who goes out from Stowe will know beauty when he sees it all the rest of his life”. Of course, this applies equally to girls in the days of co-education. There should be a fundamental belief that community matters, that character is important, and an individual’s contributions should be valued. It is not just about the self and the ego but, instead, the most important things in life are friendships, relationships and families. A recognition that material possessions are ephemeral and how we connect with others is at the centre of our human nature and our happiness. It is our memories we should cherish, not our memorabilia.

Finally, the nightcap of the interview, do you have a go-to amusing anecdote from your time as Headmaster at Stowe?

There’s one story, not from when I was Headmaster. Having returned from Czechoslovakia in the mid 1980s, I was weighing up what to do next, thinking I might go into the City, university or teaching. A job came up at Stowe – a temporary two term appointment of maternity cover – and so I applied for it. I arrived at the Corinthian Arch in a taxi and, not knowing where to go, presumed that the Arch would be the entrance to the School. With ten minutes before the interview, I paid the taxi driver and rushed towards the Arch. I stood at the entrance to the Corinthian Arch and looked across to the Main Mansion. I couldn’t see the Queen’s Drive or any form of path going down, so I had to tramp through the fields towards the House.

It was at this point that I became acquainted with the ha-ha: having jumped into it, I clambered out, covered in mud, and eventually found my way to the South Front. A teacher who I later discovered to be the legendary Chemist, Anthony Pedder, looked at me, sweating, mud splattered, and lost and thought I was a pupil. He asked if I had been out beagling, before pointing me in the direction of the Gothic Library. Needless to say, I didn’t get the job.

I remember thinking how lovely Stowe was and that, were a job to come up again, I should apply. Thirty years later I did just that.