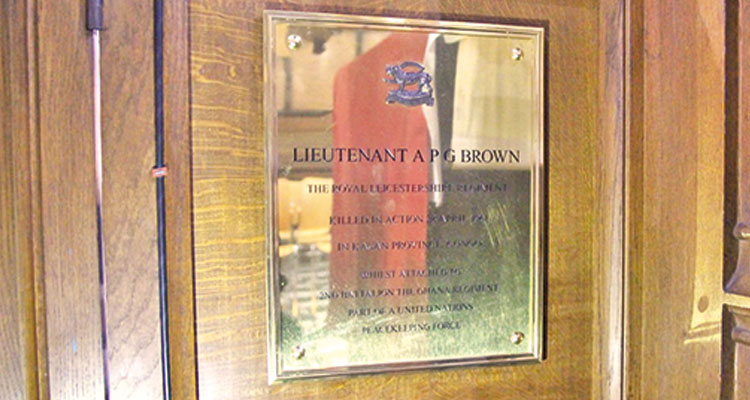 On 17 June 2018, a brass plaque was dedicated to the memory of Mr Anthony Brown (Walpole 53), in the Regimental Chapel in Leicester Cathedral. Anthony was killed on 28 April 1961, while seconded to the Ghanaian Army, serving in the Congo on United Nations duty. Anthony was reported as ‘Missing’ on page 242 of The Stoic, August 1961. His body was never found. His name is listed on the War Memorial in Stowe Chapel.

Among the many present were Anthony’s widow, Mrs Nan Langhorn, their daughter, and Anthony’s elder brother, Major William Brown (Walpole 49).

Anthony is remembered on the Royal Leicestershire Regimental website: royalleicestershireregiment.past-view.com/entity/76400-brown-anthony-piers-gayne?q=