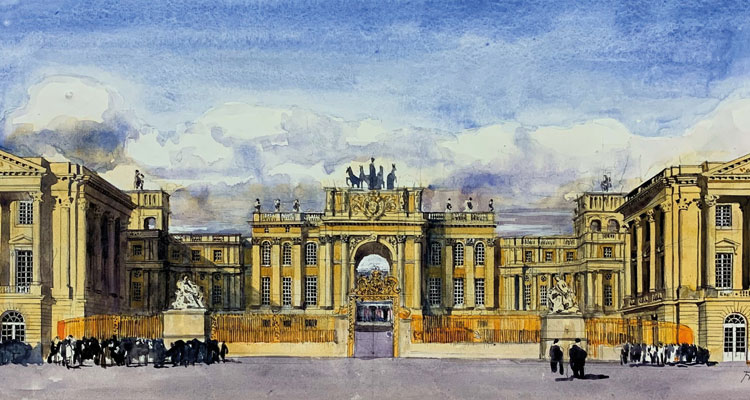 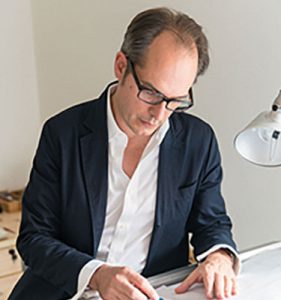 Before coronavirus turned the world upside down Miranda and I took our younger two children to see Versailles.

I feel bad saying this, but when I walked up to the front of Versailles I was struck by how unimpressive it was despite all the money spent on it. I do not want to sound negative, but I do feel it was a wasted opportunity. The palace itself seems too small in the context of all the outbuildings that it almost disappears. I later learnt that I am not the first person to make this observation, Jean-Baptiste Colbert, a minister of finances during Louis XIV’s reign, felt that his boss had turned Versailles into an “a little man with big arms and a large head.”

The garden side is not much better. The palace façade monotonously repeats the same bay configuration with little variation for its whole quarter of a mile length. The silhouette is dull and the whole composition is lacking in drama or excitement.

It is remarkable that architects as great as Louis Le Vau and Jules Hardouin-Mansart should have produced such an underwhelming building. “Come on lads, what went wrong?” I feel compelled to say.

I suspect the reason is twofold.

Firstly, Versailles is a series of massive additions to a relatively modest original château. The great architect Charles Perrault, who was also a senior official in the Royal Building Office, claimed that Louis kept the original building for sentimental reasons. Working in this ad hoc way requires great skill to ensure that the final building looks right and even the King had his reservations. In letter of 1699 written by Louis XIV’s second wife, Madame de Maintenon, she revealed that her husband privately admitted that Versailles would have been better had he demolished the old château entirely before starting.

And secondly, Louis XVI was a control freak. He was fascinated by architecture and had regular meetings on Thursdays with his architects, an impressive commitment for a busy king. A hands-on client is great, but they do need to respect and listen to their architect if they want the best results. This would have been hard for Louis who from birth was bought up to believe that he was quite literally a gift from god or ‘Dieudonné’, a name he evidently took to heart. I image that the great ideas of Le Vau and Manart’s were ignored and they ultimately just resorted to timidly pleasing their client rather than creating great architecture.

When I returned home, aided by the extra time that the coronavirus lockdown generated, I set myself the task of redesigning Versailles.

For the front elevation, to get over the problem of the diminutive central block I added a building to separate the Cour Royale from the Cour des Statues. In the middle of this block is a triumphal arch that frames the original château in the distance. By adding this building, the small scale of the centre of the palace is masked and give both courts a more pleasing proportion. The separation would also give a more interesting and varied arrive sequence.

For the garden elevation, I propose adding a large central block to break the monotony and to make a more interesting silhouette.

The astute observer will notice that these designs have a certain debt to Vanbrugh and Hawksmoor. It did make me speculate what would have happened had Louis XIV beaten the Duke of Marlborough at Blenheim. Perhaps he would have taken the first Duke’s architects and asked them to remodel Versailles. My light-hearted scribblings are a guess at what they might have produced.

For this article I am indebted to Tony Spawforth’s book Versailles: A Biography of a Palace and Love and Louis XIV: The Women in the Life of the Sun King by Antonia Fraser. Both excellent books which I can thoroughly recommend.