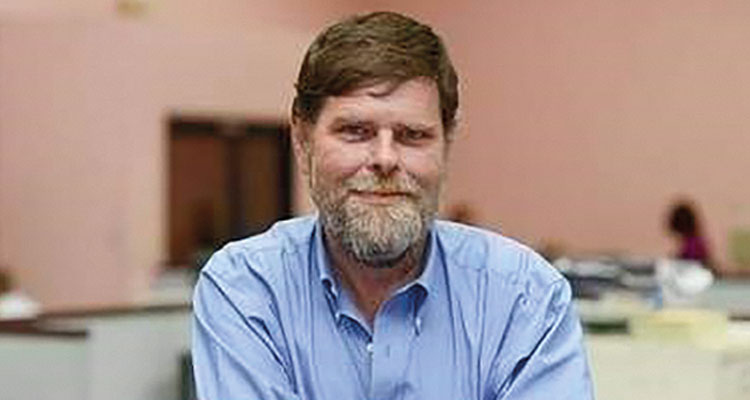 Tim Hodgson, a former Editor of the Mid-Ocean News and Editorial Consultant for The Royal Gazette, died on 1 December 2019 at the age of 57.

Colleagues and friends said Mr Hodgson, who started his career in journalism aged just 15, was an unparalleled reporter whose output left an enduring mark on Bermuda. Bill Zuill, a former Editor of the Gazette, said Mr Hodgson took to the trade as a youngster with “stunning ease” and produced some of the island’s best investigative journalism over the past 25 years from his position at the helm of the weekly Mid-Ocean News. Mr Zuill said Mr Hodgson was “brilliant and iconoclastic” with an insatiable curiosity. He added: “These were the hallmarks of a great journalist and an even better human being.”

Gavin Shorto, also a former Editor at the Mid-Ocean who worked at the Gazette when Mr Hodgson joined the weekly, said: “You don’t expect much from a schoolboy, but Tim was different. He was working more or less as a senior reporter very quickly, and certainly before he left school.” Mr Shorto added: “Tim was thoroughly intelligent, wrote extremely well and carried a small library’s worth of general knowledge around in his head. “Although this changed later in his life, he loved what he was doing – he came into the office with a smile on his face, almost rubbing his hands at the thought of being able to find and write about something that would surprise and shock Bermudians.” Both former editors agreed that Mr Hodgson seemed destined to ply his trade on the world stage, but he remained committed to Bermuda. Mr Shorto added the Mid-Ocean’s output in the 1990s rose to “amazing journalism when the Progressive Labour Party first came into power”. He said: “If the paper had been eligible for Pulitzer Prizes, they’d have won a bunch of the, but Tim was too self-effacing ever to have thrown his hat in that kind of ring.” Mr Shorto said Mr Hodgson was a “larger-than-life, Falstaffian character, though without always showing the jolly side that word suggests”. He said: “Here, he certainly challenged the parameters of our journalism. Tim Hodgson was a large and complex man, but make no mistake, he was extraordinary. Bermuda is much the poorer for his passing.”

Mr Hodgson was taken on as an intern by Charles Barclay, then the Editor of the Mid-Ocean News, after he won the The Royal Gazette’s Christmas Short Story Contest while still at Saltus Grammar School. He wrote for the Mid-Ocean News as a teenager on holiday from Stowe, where he continued his education after leaving Saltus. Mr Hodgson later attended the University of Toronto, graduated in 1984 with a Bachelor of Arts degree and joined the Gazette full time, rising to the position of sub-editor. He succeeded Amanda Outerbridge as Editor of the Mid-Ocean News in 1989 – a role he held until the weekly newspaper ceased publication in 2009. Mr Hodgson later freelanced online for Bermudian and overseas publications before he returned to the Gazette in July 2013 as Editorial Consultant. He ran the Gazette newsroom until the appointment of Dexter Smith as Editor in June 2015, but remained as Editorial Consultant until he left the company in May 2018.

Mr Hodgson’s range of interests included books, music, film and Bermuda history, and he often posted historical pieces on social media. Mr Smith said “it was an honour to work alongside Tim – first during my spell at the Mid-Ocean between 1994 and 2000, and subsequently on my return to the island at the end of 2013 for a briefer period. He was a fount of knowledge, his recall of Bermuda history unparalleled. Such a treasure will be very difficult, if not impossible, to replace.” Ms Outerbridge said Mr Hodgson had “outstanding” research and writing skills. She added: “Once he had a topic in his sights, he focused intently and left no stone unturned.” Ms Outerbridge said Mr Hodgson wrote for the Mid-Ocean while she was Editor and that “we could depend on him to come up with meaningful and substantial articles with depth”. She added: “He was intellectually curious, knew a tremendous amount about many topics, ranging from the Hollywood movie industry to Bermuda history and politics, and he cared deeply about Bermuda.”

Mr Hodgson co-wrote an award-winning series of reports with Kevin Stevenson on the United States’ Cold War nuclear weapons deployment plans. The two won a first-place award in the Inland Press Association’s annual newspaper competition for their articles, which exposed the storage of nuclear depth charges at the former US Naval Air Station in Bermuda. Mr Hodgson was praised by former premiers from both sides of the political fence. Sir John Swan, a long-serving leader of the United Bermuda Party, said Mr Hodgson was “one of the best writers Bermuda had – an intellectual writer able to grasp the issues of the day and unafraid to write about them in a literary form”. He added: “He was a master of words that defined not only the attitudes of people, but the importance of issues. “I enjoyed my close relationship with him and respected his work. More important was the integrity he had in getting the job done.”

Dame Pamela Gordon Banks, also a former UBP premier, said Mr Hodgson was “an incredible and erudite writer – I respected his passion and his ability to be forthright”. She added: “I hope that he finds peace. My heart goes out to his family.” John Barritt, a journalist and former UBP minister and One Bermuda Alliance MP, said Mr Hodgson was “one of the best writers I have ever known”. He added: “Opinions aside, he was as entertaining as he was illuminating. That is a rare skill. I particularly loved his turn of phrases. His keen wit would shine. He was also an engaging raconteur and great company at the table. I shall miss him.”

Dale Butler, a former PLP MP and minister, said Mr Hodgson had become a friend in recent years. Mr Butler said: “Our friendship was mainly over the sharing of old photographs. He also wrote extensively – I could only admire his background knowledge. “As much as I and my political party could be cut by the knife of his writing, over the past couple of years I enjoyed his conversation because politics was no longer involved.” Steve Thomson, the chairman of Bermuda Press (Holdings) Ltd, the parent company of the Gazette, said: “Tim’s passion was journalism and it showed. “His editorials in both The Mid-Ocean and The Royal Gazette were in-depth, thoughtful and always inspiring. “His writing style was very apparent and after the first sentence, you were immediately aware that Tim Hodgson was the author. “Tim’s long tenure at the Mid-Ocean and the RG made him a lot of friends, both on island and off.” Mr Thomson added: “Words that come to mind when thinking about Tim and his life’s work are passion, gentleman, intelligent, focused, kind and all-consuming. “He will be missed and was taken from us far too early.” Jonathan Howes, the BPHL chief executive, said “He was a great journalist, perhaps the best Bermuda will ever know. “He was firm in his belief that Bermuda needed independent journalists, free from the interference of advertisers and those on the business side of newspapers. “He stood up for what was right, defended the public’s right to know and was not afraid of being scrutinised for doing his job.”