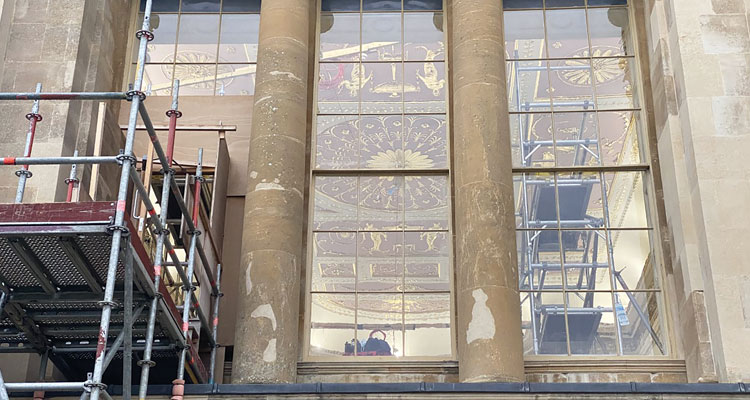 The Stowe House Preservation Trust in 2020

Work started in May 2020 on the long-awaited restoration of the Western Suite, that is all the rooms west of the Marble Saloon; the Temple Room (formerly the State Drawing Room), the State Dining Room and the small dining room.

Planning for any restoration project of this magnitude takes a long time and, by April 2018, the scope of conservation and restoration work had been agreed to provide the basis for Listed Building Consent and to initiate a competitive tender to select a contractor to carry out the work. The plan was to replace the floors in all three rooms, followed by conservation and restoration of the Dining Room, Temple Room and finally the small dining room in that order. Work was due to start immediately after Speech Day at the end of May 2020.

With a contractor appointed and Listed Building Consent granted, everything was set by early March. Starting work on the Dining Room floor at the end of May would (just!) allow time to lay the floor by September – ready for the start of the Michaelmas Term and after that, the same operation would be repeated in the Temple Room, before returning to the Dining Room for work to the ceiling in January 2021. At this stage, coronavirus had not affected the UK and the nearest reference in our risk register was to any one of a number of natural disasters. By early March, it had become a concern but the contract had been signed and the various expert panels had agreed much of the early work so we were sticking to the plan. Floors would be replaced with brand new oak, rather than repaired, paint analysis had been completed in the Dining Room and details agreed, while replica chimney pieces had been commissioned to replace the pieces that we think had been made in the 1920s. At that stage, only limited research had been completed on the Temple Room.

Our first reaction as a project team on hearing in March 2020 that the School would be forced to close was to consider whether this was an opportunity to bring forward work to reduce later disruption. The flaw in that bright idea was that we did not know when the School might re-open and at that stage there was a very real risk that bringing contractors to site would present a risk of spreading the virus. Building sites had not closed down but neither were any new sites opening. In discussion with our contractor, we were confident that social distancing could be maintained during the early stages of the project and the company had robust procedures in place to prevent the spread of the virus through their workforce. We were keen to get them on to site as we also knew that projects like ours were likely to be a lifeline as funding streams dried up and skilled conservators faced a very real risk of losing contracts.

At just the right time, we agreed with the School Executive a fairly radical change of plan – to move away from a work package based on sequencing jobs by trade to one that would see a whole room completed in one go. Our logic previously had been to accommodate the longer duration work packages at convenient times, now we had to revert to a more conventional approach but one with obvious advantages, not least that work in a single room could be contained for the duration of the pandemic. Whenever the School did return, contractors would not need hastily to clear an area to enable normal operations to resume. The obvious place to start was the Temple Room; it would be easy to close off, a suitable alternative existed in the Music Room and work could be sequenced so that, with notice, we could stop and return the room to the School relatively (relativity being a difficult concept!) easily. The slight flaw in this plan was that we had not completed the research into the decorative scheme but our experts rallied to the cause. The initial analysis had revealed three shades of pink and, where mouldings across the whole ceiling had been finished in gold, historically, only the corner panels depicting eagles had actually been silver. More detailed analysis of microscopic samples was completed and larger areas were opened up in the ceiling to confirm the exact shades of pink. The project scope also called for a replacement of the chimney piece with a replica of the original and wall coverings to simulate the ‘orange damask’ recorded in the historic guide books to the House. Very quickly, the team selected to make the dining room chimney pieces turned their attention to the single piece for the Temple Room, research into wall coverings gained pace and the contract was re-written to start in a different place.

Contractors arrived on site on 18 May, building a scaffolding structure in the room from which conservators would work and a discreet access to ensure that the site could operate alongside the School. From then on, progress was maintained towards a handover to the School for the start of the Lent Term. The detailed research required and production lead times for the wall covering and the chimney piece mean that these finishing touches will have to be added over Easter, but progress has been steady throughout and the project will be completed within budget and to the planned deadline. Above all, it will be a high quality conservation and restoration, finely gilded details on the woodwork will complement the beautifully decorated ceiling and new floor; in short, the room will have undergone a complete transformation. Simulated damask in orange will grace the walls and the chimney piece will be an exact copy of the eighteenth century piece thought to have been made by Piranesi, incorporating an antique relief. The work is a tribute to the skills of those involved but, more significantly, it could not have been achieved without the generosity of donors, many of whom are Old Stoics who rallied to the appeal led by Chris Atkinson. We thank you all most sincerely and hope that you will be able to visit and see the benefits of your generosity. SHPT’s attention is now turning to the State Dining Room where, from January to June, work will be underway on the ceiling while we continue to raise funds to complete the floor, walls and joinery.

Finally, for all Templars and others who may be wondering, the chimney piece that has been removed, with its board listing the first ten Heads of Temple House will be returned to Temple for display in a prominent area within the House.

The Stowe House Preservation Trust is an independent charity responsible for funding and managing the restoration of Stowe House and opening the house to the public. More details, including how to support our work can be found on our website www.stowehouse.org.uk.