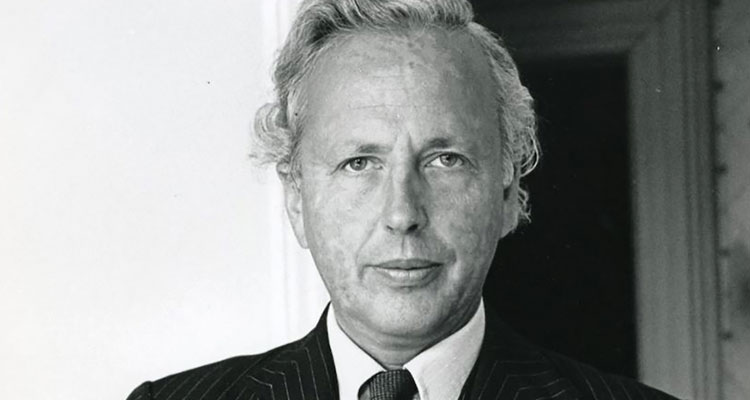 Sir Peregrine Worsthorne, who has died aged 96, was among the most unpredictable and provocative columnists of his generation, as well as the most stylish.

Often, during his brief but brilliant editorship of The Sunday Telegraph in the late 1980s, “Perry”, as he was universally known, would tell his staff that unless they could make their readers splutter over their breakfast cereal the work was no good; and no one caused more splutterings, whether from the Left or the Right, than Worsthorne himself.

He had come to The Daily Telegraph from The Times as a leader writer in 1953, but he much preferred signed articles, in which he could go against the political grain of his paper when he felt like it. So, he liked, as he put it, “from time to time to travel Leftwards” – and neither his readers, nor, one suspected, he himself, could be sure from week to week where these excursions would lead him. Excitement was what he was after.

His great value to the apparently conformist Telegraph was that he was not a Party man. “A proper understanding of ideas,” he wrote in a 1980 piece on the business of being a columnist, “requires a willingness to search for affinities.” He told Sue Lawley on Desert Island Discs that his aim was “to avoid anything that might be mistaken for consensus opinion” (he also told her that his luxury would be a limitless supply of hallucinogens).

Worsthorne had wanted an editor’s chair since the 1950s. But when the chance came in 1960, from the board of the Yorkshire Post, he turned it down. It was a decision he would regret, for he was to be twice passed over as editor of The Sunday Telegraph, which he joined at its foundation in 1961.

It was not until more than a quarter of a century had passed, and his old master Lord Hartwell had resigned the editorship-in-chief, that he got the editorial chair he wanted. But then his new proprietor, Conrad Black, decided to merge the daily and Sunday papers, and he lost it again. His three years as editor of The Sunday Telegraph had been, he said, the best of his life.

Peregrine Gerard Worsthorne was born on 22 December 1923. His father was a Belgian expatriate, Colonel Alexander Koch de Gooreynd, who had changed his name to Worsthorne (after the village in Lancashire) two years earlier.

Worsthorne recalled that at the family home in Cadogan Square he was taught by a governess from the age of six, and rooms allocated to his absent father remained untenanted. His father’s name was never mentioned, and his mother lived there alone, except for a large staff of servants.

But by the time Perry was 10 his mother, Priscilla (née Reyntiens), had left his father and married Montagu Norman (later, as Lord Norman, to be Governor of the Bank of England). Much of his childhood was spent in the company of his grandmother’s butler, James Burton, to whose “acute sense of hierarchy” Worsthorne was to pay tribute years later in an article in the Independent Magazine.

Burton was a corporal in the Home Guard when the 16-year-old Perry was a private in the same corps, a reversal of roles which the butler carried off with aplomb. “He was an authentic hero of inequality,” Worsthorne concluded approvingly.

Young Perry was sent to a progressive prep school at Abinger in Surrey and thence to Stowe on the insistence of his mother, who had thought that Stowe was also a progressive school; he was said to be annoyed not to have been sent to Eton. Educational theories at Abinger had not taught him much and it was some time before Stowe realised that it had a clever little boy on its hands and moved him up from the bottom form.

Already he showed immense style and elegance. Traditions differ as to the exact cut and colour of the tweed suit which he ordered for himself and for which, to the glee of schoolmates, he was discovered having himself fitted.

From Stowe he went to Peterhouse, Cambridge. One of his supervisors there was the historian Herbert Butterfield, whose famous distrust of political enthusiasms seems to have struck a chord in his pupil.

At school and at Peterhouse he began a lifelong friendship with Colin Welch, who would be deputy editor of The Daily Telegraph from 1964 to 1980. The two of them were the brains in papers which were in some respects solid rather than brilliant.

At Cambridge Worsthorne continued his career, begun at Stowe, as a bold, glamorous grandee with a flair for the unexpected.

When war came he was turned down by the Coldstreams and found himself in the Ox & Bucks Light Infantry, then joined Phantom, the Intelligence outfit attached to Montgomery’s 21st Army Group. It was in Phantom that he met, and was under the command of, the philosopher Michael Oakeshott, who became an abiding influence on him.

Injured on an assault course while training, he was sent to the Radcliffe Infirmary in Oxford and spent six months recuperating, during which he became a temporary member of Magdalen College. He returned to Peterhouse after the war to finish his degree, then went to the Glasgow Herald as a sub-editor.

Two years later he joined The Times and stayed there for five years, including a stint in Washington (though his pro-Republican stance and his approval of Senator Joseph McCarthy found little favour in Printing House Square), before joining The Daily Telegraph under Colin Coote.

Part of Worsthorne’s charm, which was almost formidable, came from his outrageous good looks: the bright blue eyes and – until they turned an elder-statesman silver – golden locks, slightly feminine mouth and penetrating drawl ensured that his entrance into most company was immediately noticed.

But it also came from an engaging frankness which could be positively foolhardy. His voice could often be heard, not merely at private dinner tables but also in more populous places such as the Beefsteak or the Garrick, giving his opinions of colleagues or reports of conversations with others.

He was by no means as conceited as he sometimes seemed. Only a few weeks before he lost his job as editor of The Sunday Telegraph he received written assurances from Andrew Knight that the paper’s identity was safe, which encouraged him to send a letter to all its journalists confidently denying rumours of a merger and attaching Knight’s letter to him. His subsequent unexpected dethronement made him, he wrote in The Spectator, “sick with indignation and shame”.

Worsthorne wept when a junior colleague commiserated with him for his loss of the editorship: he had not realised how much his staff, or at least some of them, had liked him. These were not the tears of a complacent man.

In 1950 he had married Claude Bertrand de Colasse (known affectionately as Claudie), who died in 1990, and to whom he soon afterwards paid an almost unbearably moving tribute in his weekly column for The Daily Telegraph.

He was knighted in 1991, and in the same year he married Lady Lucinda Lambton, one of the daughters of Lord Lambton, who survives him with his daughter, Dominique.

He then gave up editing The Sunday Telegraph Comment section and settled down with his new wife at her house in Buckinghamshire, whence for several years he continued to send a weekly column to his old paper – not so much now about the affairs of the day as about his occasional travels or domestic doings.

His marriage to Lucy Lambton was a great love-match. Worsthorne spent the last five years frail and confined to bed, latterly suffering loss of mental sharpness, and she looked after him beautifully.

Whether the reader agreed with Peregrine Worsthorne or was maddened by him, his clear, relaxed, discursive style was always compelling; and whatever his disappointments he never lost sight of his aim – “genuinely original, iconoclastic, irreverent journalism”. It is for this, if for nothing else, that he will be remembered.