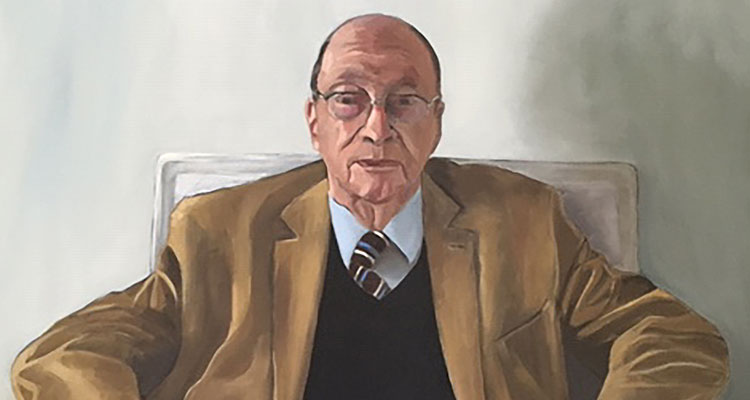 Paul loved his time at Stowe followed by Cambridge and the Army – the best years of his life he would say – before moving into business deploying his skills in engineering, finance and management. Born in London, the twin son of a Doctor of Medicine, he spent his early schooling years in Carmarthenshire where his father was in general practice and he spent much of his spare time playing tennis with his father on the court that his father had installed behind his surgery.

He went to Stowe in 1938 with an entrance scholarship, became a School Prefect and Secretary of Tennis, playing in the first VI for two years at a time when the School was pre-eminent in that sport. His outstanding memory of Stowe was of J.F. Roxburgh, remembering his great personal interest and kindness. After leaving Stowe he maintained a correspondence with J.F. for a number of years. Other memorable characters who taught him were ‘Freddie’ Archer, ‘Daddy’ Dewing, ‘Piggy’ Hunter and ‘Bumpth’ Playford. One Reverend at the time, nicknamed ‘Brookers’, gave a weekly divinity lesson. The poor man had to keep his nerve amidst frequent interruptions from two boys in particular, requesting explanation of occasional words of a sexual nature in the Bible!

In October 1942 he went up to King’s College, Cambridge and read for the Mechanical Sciences Tripos, which led to an honours degree and an MA. It was wartime and he had been earmarked for subsequent recruitment into an Engineering branch of the Army and Commissioning. His time at Cambridge was very active and much enjoyed; he had heavy Senior Training Corps commitments, rowed in the King’s 1st VIII, was Vice-President of the College Boat Club, Captain of College Tennis and was an Officer of the Cambridge University Society for International Affairs.

After qualification he entered the Royal Electrical & Mechanical Engineers where he further qualified as an E.M.E. at the Military College of Science and served for over three years. Having been trained with a view to partaking in the war against Japan, he was posted to India. On arrival, the war with Japan was over and he proceeded no further East. Attached to the Indian Army, he first went to Rawalpindi, the Punjab headquarters of the North-West Army in what is now Pakistan, for further posting. He soon received orders to proceed to Bannu, near Kaziristan. This seemed to amuse his fellow officers in the mess who suggested he might first make his Will! The North-West Frontier borders Waziristan and Afghanistan. Various local Pathan tribes rendered the experience somewhat threatening. The Wazir tribe were the most feared and known to mutilate, behead, castrate and flay. He fortunately managed to avoid this fate and was eventually selected for staff appointment in what is now Pakistan and the new India. He became Deputy Assistant Director of Mechanical Engineering at Supreme Headquarters, New Delhi at the time of partition of the country and was eventually released as a Major.

Out of the army and heading for 24, after an initial couple of years with a Westminster firm of Consulting Engineers, he performed various management positions at Hayward Tyler and then British Oxygen Company before joining the Industrial & Commercial Finance Corporation (now 3i Group), eventually having the opportunity of taking on the challenge of resuscitating a company controlled by ICFC – Hudswell Clarke, an old-established but outdated Leeds locomotive manufacturer. He acted as Managing Director of what eventually became the Hudswell Group and was responsible for substantial diversification and rationalisation. His ultimate management appointment was that of Chief Executive of a major Hargreaves Group company with divisions engaged in structural engineering, civil engineering construction, plant hire and materials handling and distribution.

In semi-retirement he was a part-time consultant and did business advisory work for the Department of Industry and Employment, involving many hundreds of businesses; he also served as a Member of the Industrial Tribunals for over ten years until final retirement at the age of 69.
He was a Chartered Engineer, a Fellow of the Institution of Mechanical Engineers and a Life Fellow of the Institute of Business Advisers.

Paul was a Chairman of his Village Hall Committee and involved with his local church, at times as PCC Secretary and a Warden. He was also Chairman of a local tennis club, having acted as Honorary Secretary of other tennis clubs beforehand. In full retirement he was well-occupied with golf, gardening and walking and took up the piano, bridge and fly-fishing. Above all he valued time spent with his family – his wife, Jonet, two lawyer sons, Guy (Grenville 68) and Neil (Grenville 70), and his five grandchildren. As regards to Jonet, to quote from one of J.F.’s letters to Paul: “May I send you very many congratulations on your decision to marry, on your fortune in meeting the right lady and on the success, which has attended your attack on her defences”.