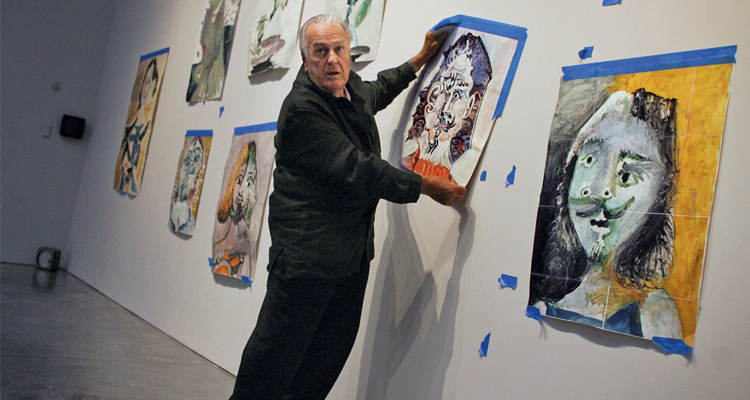 John was arguably Britain’s most distinguished Art Historian. His achievements have been recognised in the award of France’s Ordre des Arts et des Lettres (an honour also conferred on Bob Dylan and TS Eliot), as well as his appointment in 2012 as Knight Commander of the Order of the British Empire. His multi-volume biography of Picasso has been awarded the prestigious Whitbread Prize. Sadly, he died whilst still at work on the final instalment of this biography.

John was the second recipient of the American Worthies Award in 2016 and graciously agreed to be interviewed before he was presented with the Award by Brian Hecht, Chair of the American Friends of Stowe. From the outset, it became clear that John still has enormous affection for Stowe and he spoke fondly of his time in the Art School where he was inspired by Robin and Dodie Watt, the Canadian art teachers who actively encouraged Stoics to take an interest in Cubism and Surrealism, championing artists like Picasso, Léger and Braque.

John described poring over the journals of contemporary art and Stowe must have been one of the very first schools to champion the international avant-garde. He also paid tribute to the genius of JF Roxburgh who promised that no Stoic would leave the School without acquiring a lasting appreciation of beauty – something which John clearly took to heart as he dedicated the rest of his life to collecting, studying and writing about art. John told us of a time when Stowe’s temples and follies were crumbling and neglected, hidden by trees and shrubs, waiting to be discovered by an adventurous schoolboy with an interest in art and architecture.

From Stowe, John enrolled at the Slade School of Fine Art, which had been evacuated to Oxford during the Blitz. A short spell in the Irish Guards ended when John contracted Rheumatic fever and was invalided out of the Army. He spent the rest of the war working as an industrial designer in London where he befriended future luminaries such as Francis Bacon and Lucian Freud. John was well acquainted with everyone of importance in the British, French and American art scene during the second half of the twentieth century.

In 1949, he went to live in Provence with the art historian and collector, Douglas Cooper, and we were regaled with amusing stories of their friendship with Picasso, Léger and de Staël. Together, Richardson and Cooper collected artists whom the Tate Gallery under the directorship of the John Rothenstein obtusely ignored and we were given an insight into the machinations which led to Cooper’s great collection being broken up and sold instead of adorning the walls of The Tate.

In the early 1960s, Christie’s hired John to open a New York Office. He left Christie’s in 1973 to work for the Knoedler Gallery, also in New York, where he was put in charge of 19th and 20th century painting. John was later named Managing Director of Artemis, an art investment fund. By the 1980s he had abandoned dealing in favor of writing for publications like Vanity Fair, where he was a contributing editor, and The New York Review of Books.

During his seven-decade career, John collected a wide circle of friends, including artists – Picasso, Georges Braque, Francis Bacon, Lucian Freud, Andy Warhol – as well as writers: Jean Cocteau, WH Auden, Nancy Mitford and Tennessee Williams. He was an usher at the photographer Cecil Beaton’s memorial service and delivered a eulogy at Warhol’s funeral.

For the past 20 or so years he divided his time between his loft apartment near Union Square in Manhattan – a grand enfilade of rooms overflowing with everything from Picassos and Braques to flea-market finds he had collected from every corner of the globe – and an equally brimming country house in the hills of western Connecticut.

He balanced his days between organizing exhibitions for Gagosian and writing the fourth and final volume of his Picasso biography. John will be remembered as one of the world’s most influential and entertaining Art Historians.