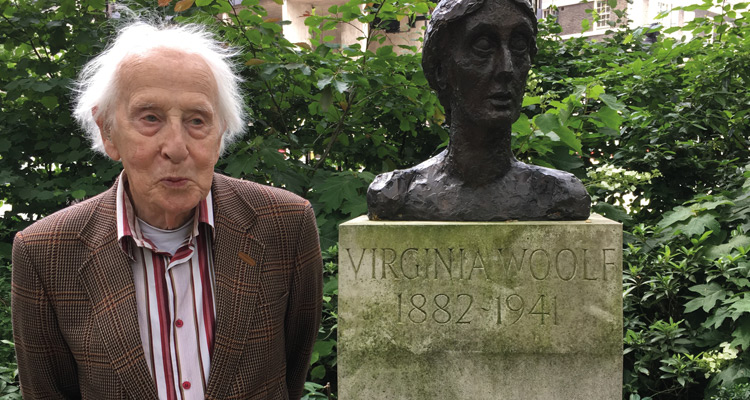 Cecil Woolf with the bust of Virginia Woolf located in Tavistock Square garden, dedicated in 2004 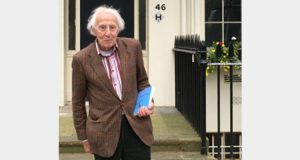 Publisher and Editor Cecil, was a nephew of Virginia and Leonard Woolf and the last person to have known Virginia Woolf personally, taking her tea in bed as a little boy. From his house in Mornington Crescent, north London, he ran a small publishing company, Cecil Woolf Publishers, producing books including the Bloomsbury Heritage Series, a collection of monographs exploring all aspects of Virginia Woolf and her fabled circle.

A kind, charming and erudite man, in later years he spoke regularly at Woolf conferences and extended the hand of friendship to young scholars and writers, inviting them into the home he shared with his wife, the biographer and critic Jean Moorcroft Wilson, where art by Vanessa Bell and Duncan Grant adorned the walls and dinner was served on the table on which Virginia and Leonard Woolf had run the Hogarth Press.

Cecil was at Stowe during the Second World War. He was a bright student who at another time would have gone on to university, he instead enlisted in the Army, joining the tank regiment as a private and fighting in Italy. He returned in 1947 as a Captain, fluent in Italian, and had a brief career in the City at Woolf, Christie, his uncles’ stockbroking firm. His sights set on publishing, he left to become an antiquarian bookseller.

It was a trade to which Woolf was no stranger, having worked with Leonard at the Hogarth Press, and in 1960, he set up his own imprint. The first in the Bloomsbury Heritage Series appeared in 1994. He published an extensive list of First World War poets, as well as his own writings – including, in 2017, a short memoir, The Other Boy at the Hogarth Press: Virginia and Leonard Woolf As I Remember Them. Cecil remembered his aunt as “amusing, funny – a very motherly sort of person”, and his last sight of her was up a tree picking apples. He was at Stowe when she died.